Winds of political dubiety in Kerala

Winds of political dubiety in Kerala 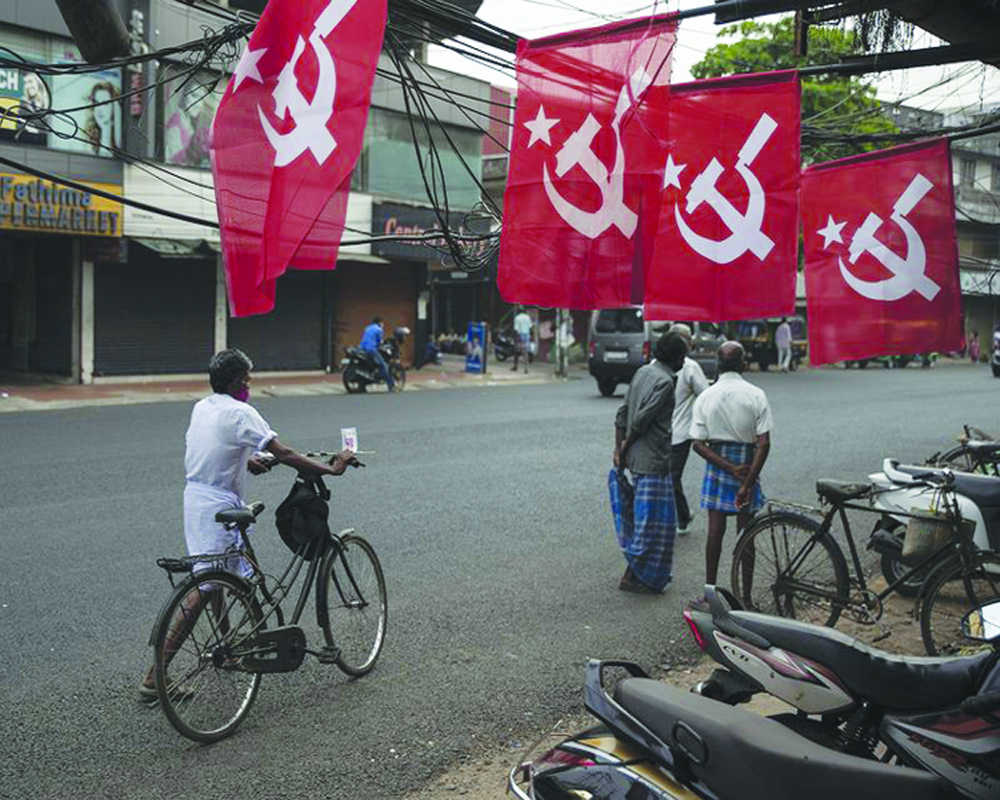 What adds spice to this year’s Assembly poll is whether the State would see an incumbent Government returning to power?

Though Kerala has seen many electoral battles in the past, no election has generated the kind of heat and dust which we saw during the Legislative Assembly poll held on April 6 this year. The electorate of the State had only two options till now — choose either the Congress-led United Democratic Front (UDF) or the CPI(M)-led Left Democratic Front (LDF) which were the two main protagonists in the State’s political as well as social theatre. What adds spice to this year’s Assembly poll is whether the State would see an incumbent Government returning to power? This has not happened in Kerala for more than four decades. The present-day UDF came into existence in 1969 and the LDF in 1980. Except for fringe political outfits with presence in some pockets aligning and realigning with the big brothers (the Congress and the CPI-M) it could be said that the voters in the State had no other alternative. Kerala is known to vote in a peculiar manner whether it be to the Lok Sabha and the Assembly.

The election which comes to mind is that of 1977, the one that was held after the internal Emergency declared by the then Prime Minister Indira Gandhi in June 1975. There was a discernible anti-Congress wave all over India. A Keralite by the name of Raveendra Varma contested the Lok Sabha election from Ranchi in Bihar and won with a big majority. He was made a Cabinet Minister in the Morarji Desai-led Government (1977-1979).

But what surprised the nation was the result from Kerala. The State which loses no opportunity to claim its intellectual superiority voted en masse for the UDF in the 1977 election! The UDF literally swept the 20 Lok Sabha seats that were at stake from Kerala. In the Legislative Assembly election held simultaneously with the Lok Sabha poll, the UDF won 111 out of the 140 seats, while the LDF was pulverised. This was the only time in Kerala’s political history an incumbent Government managed to win the people’s mandate and retain power.

Much water has flown down the Periyar River since then. Kerala saw many political churnings that led to new permutations and combinations. But the core structure of both the Fronts remained intact. The BJP was seen as a north Indian political outfit and the party failed miserably to take roots in the State. The absence of leaders of stature and the religious demography of Kerala played a significant role in keeping the Hindutva party off the State. It was the Ram Janmabhoomi agitation which paved the way for the BJP’s entry into Kerala. The chieftains who dominated the political horizon of the State are gone. The lone surviving founder member of the CPI(M), VS Achuthanandan is old and bedridden. He was the most popular Marxist leader the State has seen, an equivalent to the likes of EK Nayanar and EM Sankaran Namboodiripad (both left us to meet Marx). It was Achuthanandan who tilted the balance in favour of the CPI(M) in the 2016 Legislative Assembly election. The National Highway from Kaliyikkavila in Thiruvananthapuram to Manjeshwar in Kasaragod was dotted with life-size posters and flex boards of VS, who was projected as the chief ministerial candidate of the LDF. The LDF won convincingly but it shocked the party cadre and the followers of VS by declaring that Pinarayi Vijayan would be the Chief Minister. When some of the media persons asked the party’s general secretary Sitaram Yechury, who declared Vijayan as the Chief Minister, what would happen to Achuthanandan, a peeved Yechury replied that he was “the party’s Kerala Castro.” It was a shock for Achuthanandan. His name and image were exploited by the party to the hilt only to dump him after the election. This is nothing new in the CPI(M). KR Gowri Amma, the mercurial leader from Alappuzha was projected and portrayed as the chief ministerial candidate of the party during the 1987 Assembly election. The slogan coined by the CPI(M) for that election was: “Keram thingum Kerala naadu  KR Gowri bharicheedum (Kerala, jam-packed with coconut trees would be ruled by KR Gowri).”

This was a slogan with multiple targets as coconut trees symbolised the powerful Eezhava community  known for their prowess in toddy tapping and trading. Gowri Amma belonged to the same community.  But once the election result was announced Nayanar, a member of the Nair community turned out to be the dark horse and was sworn in as the Chief Minister much to the dismay of Gowri Amma and the Eezhava community.

Opinion polls managed by the media houses in the State claim that the CPI(M)-led LDF is all set to return to power. But there are many unanswered questions and unasked queries. This is the first time in Kerala politics that central agencies like the Central Bureau of Investigation (CBI), the Enforcement Directorate (ED), the Customs department and the National Investigation Agency (NIA) launched investigations against Ministers, bureaucrats and party commissars for charges ranging from gold smuggling, hawala transactions, bribery and acts of improprieties. M Sivasankar, the then Principal Secretary to the Chief Minister as well as the Chief MO were probed with the former spending nearly three months in jail. His name was associated with a cartel of smugglers and hawala dealers. P Sreeramakrishnan, the Speaker of the Legislative Assembly, was questioned by the agencies in connection with the hawala transaction as a follow up to the statement given by his driver that the former had handed over a sack containing US Dollars to be delivered at the UAE Consulate.

P Sreeramakrishnan is facing a series of allegations for his liaison with Swapna Suresh, the kingpin of the smuggling cabal. Swapna herself disclosed to the agencies about Sreeramakrishnan’s investment plans in the oil-rich kingdom of West Asia. KT Jaleel, Minister for Higher Education had to put in his papers after the April 6 polls  as the Lokayukta found him guilty in cases of nepotism and favouritism. Kodiyeri Balakrishnan, the party’s State Secretary had to make way for another lightweight because of the ED raiding his house. Balakrishnan’s younger son has been arrested and incarcerated in Parappana Agrahara Central Jail in connection with hawala and narco smuggling cases.

Still, the CPI(M) has the boldness to make “LDF for sure” its war cry. The Sabarimala Temple issue has hurt the sentiments of the Hindus. It was reflected in the 2019 Lok Sabha election in which the UDF swept 19 out of the 20 seats. Since then nothing has happened in the State to turn the tables in favour of the CPI(M). Moreover, the BJP had made some politically shrewd moves, focussing in regions where the Hindus have a considerable presence. If the Hindutva party bags just five seats, the State is in for a hung Assembly , according to P Rajan, veteran scribe and Kerala’s chronicler.

Kerala has seen a hung Assembly only in 1965, when no parties could reach the magic figure needed for forming a Government on its own. Alliances and coalitions were in an embryonic state those days.

The best Governance Kerala has seen is that of the 1987-1991  LDF Government led by Nayanar. There were no major scams or corruption charges against that Government. But in the 1991 election to the Legislative Assembly, the UDF sailed through easily despite the absence of any anti-incumbency factor. Marxists claim it was due to the sympathy wave generated by the assassination of Rajiv Gandhi by the Tamil terrorists at Sriperumbudur in Tamil Nadu. If there was any sympathy wave, it should have reflected in the election to the Lok Sabha held simultaneously with the Assembly polls. The Congress could score just 244 seats despite the sympathy wave. Kerala voted differently.

The question being asked in Kerala is how long would it take for the CPI(M) and the Congress to come together? Both the parties are electoral allies in the rest of the country, except in Kerala. So what holds back an open acceptance of the relation and a possible marriage?