Chirag blames JD(U) for LJP split, vows to save partyp

Chirag blames JD(U) for LJP split, vows to save partyp 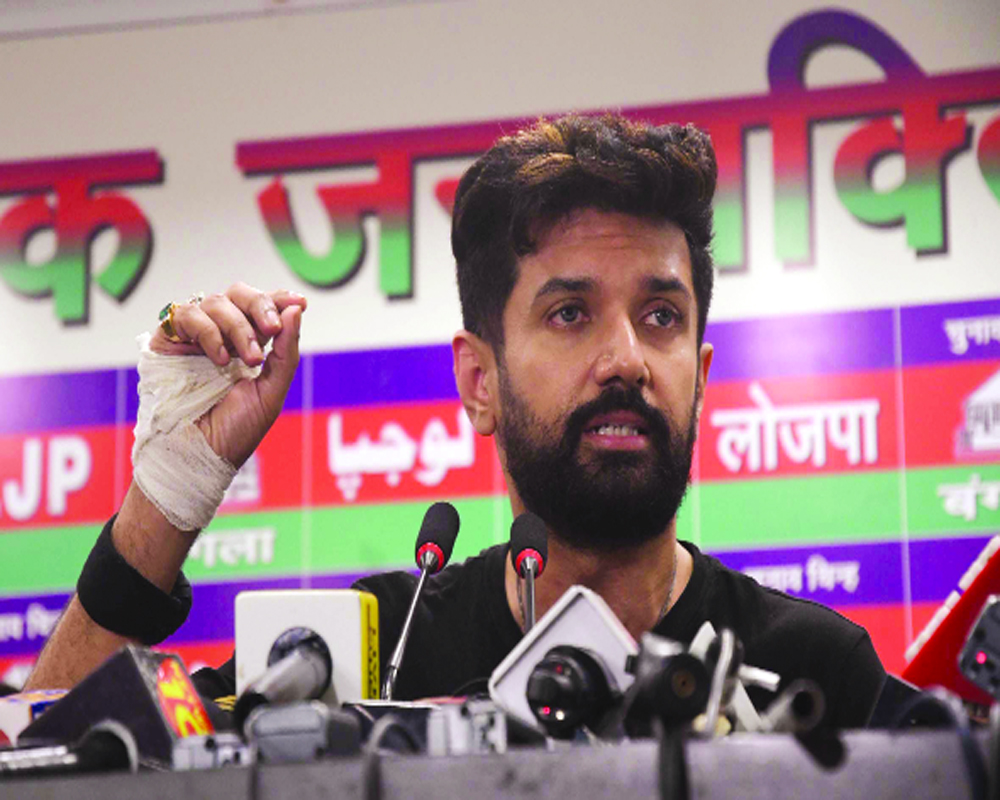 Lok Janshakti Party (LJP) leader Chirag Paswan on Wednesday  vowed to fight back to save the party founded by his father late Ram Vilas Paswan, saying he was “sher ka beta” (lion’s son).

In his first media interaction after split in the LJP parliamentary party and five of LJP MPs writing to Lok Sabha Speaker to appoint his uncle Pashupati Kumar Paras as the leader of the party, Chirag blamed the Janata Dal (United) for crisis in the party.

While blaming the JD(U) for the split, he steered clear of questions regarding the role of the BJP in the development and added that what has happened is also an internal matter of his party for which he will not target others.

Chirag may have avoided any reference to the role of the BJP behind the split in the LJP, but it is well known that the saffron outfit had lent its weight behind Paras. State BJP chief Sanjay Jaiswal had met Paras just three days before the split in the parliamentary party.

When asked if “Hanuman” who is in trouble now will seek help from “Ram”, a reference to his projection of his relationship with Prime Minister Narendra Modi during the Bihar Assembly polls as that between the two famous characters of epic Ramayan, he said, “If Hanuman has to seek help from Ram, then what good is Hanuman and what good is Ram.”

It is going to be a long battle, Paswan said, as the group headed by him fights the faction of five other party MPs, led by Paras, to claim ownership of the LJP.

The JD(U), he alleged, had been working to cause a split in the party even when his father was alive. Targeting the party, he said it has always worked to divide Dalits and weaken its leaders.

The LJP draws its support from Paswans, the largest Dalit caste in Bihar.

“A conspiracy was hatched behind my back while I was ill,” Paswan said. He had recently suffered from typhoid.

The 38-year-old MP from Jamui expressed determination to take on the rival group while also taking swipe at his paternal uncle without using any strong words to attack him.

“I did not feel orphaned when my father died last year. I do feel now,” he said, adding that he had expected his uncle to play the role of the family’s patriarch but was instead abandoned by him.

Paswan recalled his decision to walk out of the ruling NDA in Bihar to take on Chief Minister Nitish Kumar, and said many wanted him to opt for a life of comfort and not struggle by allying with him.

“For that I would have to bow before Nitish Kumar. I could not do that. My uncle played no role in the election campaign,” he said and rejected accusations from the rival group that he took unilateral decisions during the polls.

Chirag has also contested Lok Sabha Speaker Om Birla’s decision to name Paras as the leader of the party in the House, saying it is “contrary” to the constitutional provisions of his organisation.

In a letter written on Tuesday, Paswan also informed Birla of the party’s decision to expel five MPs, who have joined hands against him, and urged the Speaker to review the earlier decision and issue a new circular naming him as the LJP leader in the Lok Sabha.

“Since Article 26 of the Constitution of Lok Jan Shakti Party empowers Central Parliamentary Board of the party to decide who would be Leader of our Party in Lok Sabha, hence, the decision of announcing Pashupati Kumar Paras MP as Leader of LJP party in the Lok Sabha is contrary to provision of Constitution of our party,” he wrote.