Ariz gets death for killing cop in Batla House encounter

Ariz gets death for killing cop in Batla House encounter 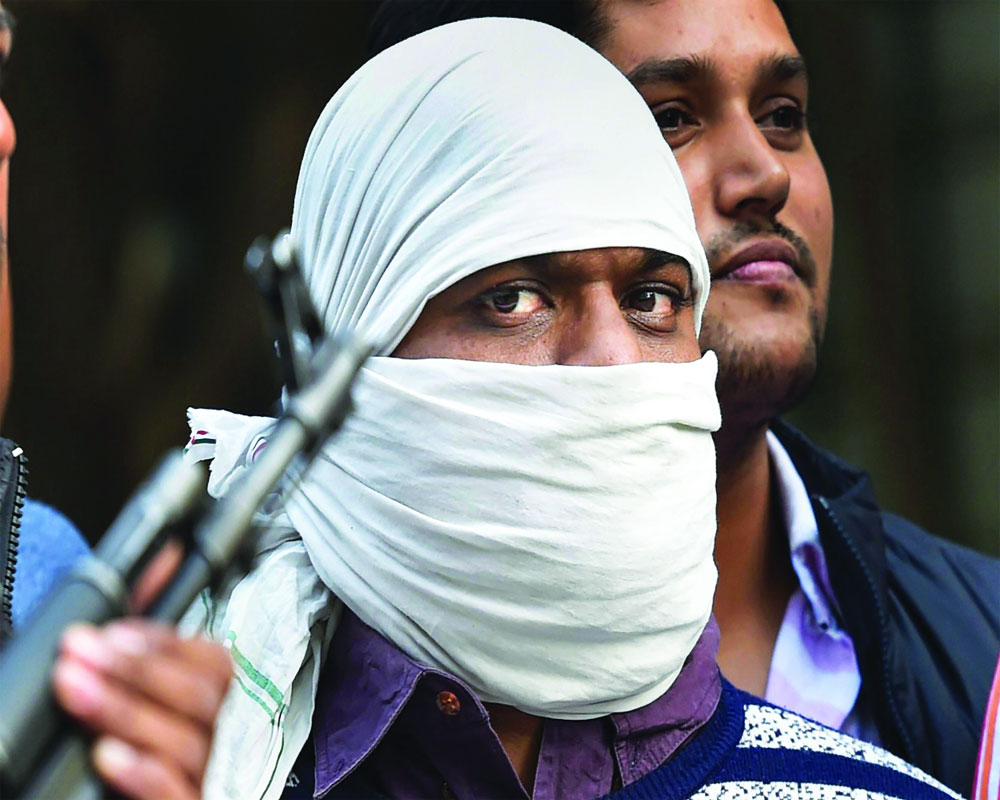 A Delhi court on Monday awarded death sentence to Ariz Khan, convicted for the murder of Delhi Police Inspector Mohan Chand Sharma and other offences in connection with the 2008 Batla House encounter.

Inspector Sharma of the police’s Special Cell was killed during the Batla House encounter between the police and terrorists in Jamia Nagar in South Delhi following serial bomb blasts in the national Capital in which 39 people died and 159 were injured.

The court also imposed a total fine of Rs 11 lakh on Ariz in the case. It said Rs 10 lakh should be immediately released to the family of Sharma.

“I feel the fine of Rs 10 lakh is insufficient. Hence, I am referring the matter to Delhi Legal Services Authority for award of additional compensation,” the judge further said.

Additional Public Prosecutor AT Ansari, appearing for the police, sought death penalty for Ariz, allegedly associated with the terror outfit Indian Mujahideen, saying it was not just any killing but a murder of a law enforcement officer who was a defender of justice.

He further said a police officer was killed while discharging his public duty.

“Ariz along with others was carrying deadly weapons which clearly suggests that they were ready to kill anybody in any eventuality. They were the first to start fire without any provocation,” the public prosecutor said.

He added that widespread concerns were raised after the incident regarding the safety of police officers and it instilled fear in the minds of the common people.

Advocate MS Khan, appearing for Ariz, opposed the death penalty and said the incident was not premeditated.

The court had said on March 8 that it was “duly proved that Khan and his associates caused murder of police official and fired gunshot on the police official”.

A trial court had sentenced Indian Mujahideen terrorist Shahzad Ahmed in July 2013 to life imprisonment in connection with the case. His appeal against the verdict has been pending in the High Court.

Khan had fled from the spot and was declared proclaimed offender. He was arrested on February 14, 2018, and faced the trial.

On March 8, the Additional Sessions Judge Sandeep Yadav had convicted Khan stating that the evidence produced by the prosecution duly proved the case beyond reasonable doubt. The judge had said it was “duly proved that Khan and his associates caused murder of police official and fired gunshot on the police official.”

“The evidence adduced on record, including ocular, documentary and scientific, prosecution has proved beyond reasonable doubt that Khan along with accomplices with common intention obstructed inspector Sharma in discharge of public function,” the court had said.

“Khan, along with his accomplices, also fired gunshots at head constables Balwant and Balvir Singh,” the court had said.

The encounter had taken place within a week of 2008 Delhi serial blasts that had killed 30 people. Blasts had taken place at Karol Bagh, Connaught Place, Greater Kailash and India Gate. The Delhi police received intelligence about terrorists hiding at L-18 Batla House.

Khan, a native of Azamgarh in Uttar Pradesh, was arrested by the Delhi police’s Special Cell in February 2018. The multiple bombings that rocked cities like Jaipur and Ahmedabad, apart from the national capital itself, in 2008 saw 165 people losing their lives and over 500 injured in all. A reward of Rs 15 lakh had been declared on Khan, besides an Interpol Red Corner Notice.