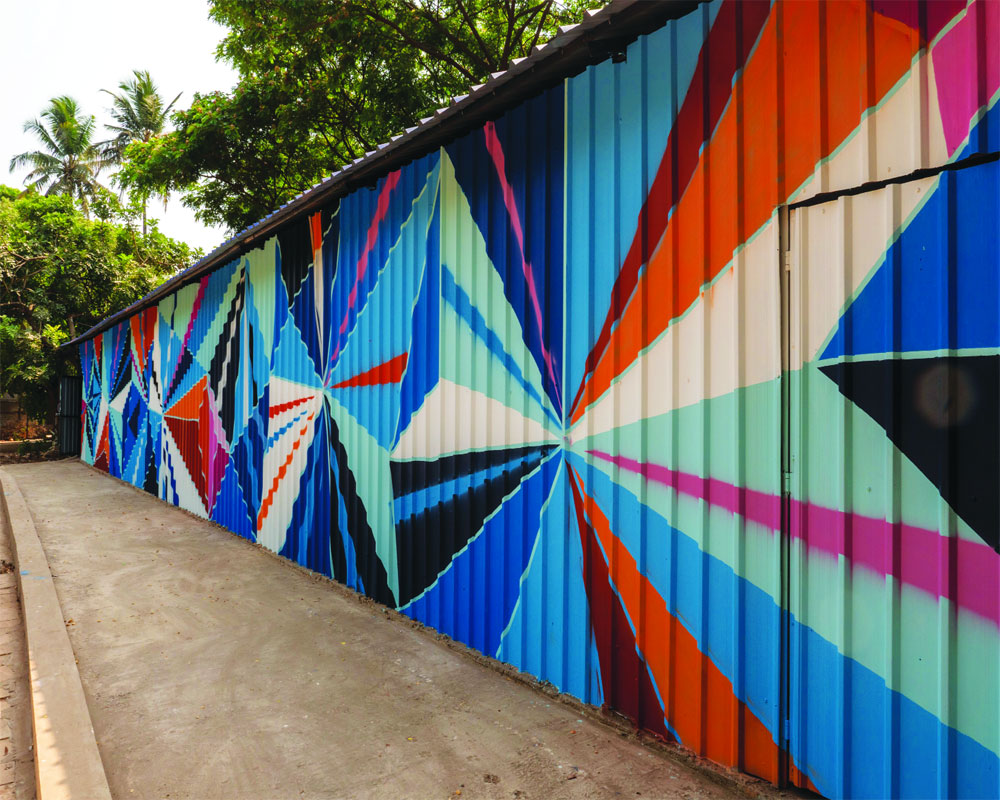 You just cannot miss the beautiful mural painted in colours of Goa as you drive past the busy road in Dona Paula, Panjim, Goa. It’s an unusual canvas. Painted in bright hues, mostly blue, this work of public art is painted on Goa’s dry waste sorting stations, making for an attractive selfie point.

Called Goa Glitch, this mural is a joint initiative of Bombay Sapphire’s Stir Creativity, Serendipity Arts Foundation, the Corporation of the City of Panaji (CCP) and St+art India co-founder Hanif Kureshi. The idea being to tap into the imaginative spirit of those passing by. The mural features geometric visuals in beautiful hues of the Bombay Sapphire blue, representing the spirit of adventure and the openness of Goa, and bringing to life the endless coastlines, and the expansive blue skies of the city.

“The mural is about exploiting the colours of Goa, like a glitch,” says Kureshi in a candid conversation post the unveiling of the mural. “I visualised it as glitching of the colours of Goan skies — in summer, monsoon, winter; morning, afternoon and noon… Different shades of blue that could also be interpreted as colours of water, more specifically the ocean. It’s like the glitch of both skies and the ocean and that’s why Goa Glitch,” he says.

Kureshi has been working with Serendipity Arts for the last four years or since it started. In the first edition, Kureshi participated as an artist and then from the next edition onwards he worked as a curator, where he brought in St+art India and put together street art editions in Panjim. Bombay Sapphire’s Stir Creativity platform aims to revive and enable creative self-expression amongst the audience. For over three decades, the brand has collaborated with designers, artists, architects, and individuals from outside the creative industry to create artworks that reawaken creative potential.

“Each mural has a story. It’s interesting when you work on the street, you find that there are so many stories that are waiting to be told. As for this, I am kind of familiar with Panjim’s landscape and whenever a new structure comes up, we look at it as a possible canvas,” he shares. This, or shall we say, these canvasses have been particularly interesting. “Not many are aware that these new structures are actually dry waste sorting stations. This is where CCP segregates the waste of dry kind such as paper, plastic, sharp objects, glass, steel and metal. These sheds play a very important role in the whole recycling scheme of things. Our idea was to bring attention to the process and promote recycling. We wanted to give it a new life and make it not look like a dustbin. And we thought what better than art to get the conversation started,” he says, speaking of the collaboration.

Considering Dona Paula is one of the busiest public areas in Goa, the mural highlights the artist’s message on the importance of sustainability and recycling very effectively. In India, Goa is one of the cities that recycles 80% of their waste with a strong model created for waste management and sustainability. In addition to stirring creativity among the community, the collaboration builds awareness for environmental sustainability and encourages people to be more conscious of their actions, he shares. Besides this shed, Kureshi is collaborating to paint at least three more in a year.

An alumni of Baroda School of Art, Kureshi started painting on streets in 2008. He began with Graffiti and gradually moved on to the world of street art which he says, he finds “more free”. “The difference between Graffiti and Street Art, you could say, is the sense of style. While Graffiti can be likened to vandalism, Street Art is more positively thought out and refined. So, yes, you could say that I sought an expression that is more positive and would provoke people to think,” he shares.

From getting German street artist, Hendrick ECB to paint the 150 ft mural of Mahatma Gandhi at the Police Headquarters in New Delhi, as part of the St+Art Delhi street art festival in January 2014 to commemorate the martyrdom of the Father of the Nation, to putting together Street Art festival in Shahpur Jat and Hauz Khas in Delhi, the entire process evoked the idea on gentrification in the city. “The awareness regarding the street art grew as we moved towards Lodhi Colony and worked with the government properties. However, working at a central location like Lodhi Colony, we realised that there is no room for gentrification there. We have been doing similar work in Chennai and Mumbai,” he shares.

While Kureshi shares that the response and reception to street art has grown in the past decade, the element of planning in the urban-scape continues to elude in the country. “There’s no urban planning element to street art as of now. And that’s why, I feel, it becomes more important for art to cover up for all that is not planned,” he avers. Delhi’s Lodhi Colony perhaps is a case in point but then there is a catch. “Maybe at some point, Lodhi Colony will be demolished and there would be high rises instead. But I still feel the art that found place there would leave a lasting impact. I think about the children growing up in Lodhi Colony and their imagination and what they would like think about art and perhaps, choosing art as a career option,” he says.

On the subject of Street Art versus vandalism, Kureshi has a take: “There is a thin line between vandalism and street art. Personally, when I set out to do graffiti, I could have gone on to become a rebel. More so in principle, as there is a school that produces rebels and is more of a breeding ground where you adopt a bottom down approach. Street art, on the other hand, takes a top down approach where you get on the ground with more voices on the street to inspire more people to express themselves. You can be vocal about issues with the same amount of rights which any other company has in terms of putting in money and making an ad and putting on the face. If carried out properly, with requisite permissions, even the people start owning street art. That’s when the real change takes place.”

This is also not the first time that Kureshi has lent his creativity to a cause. Kureshi has recently partnered with Art For Change, a virtual art challenge and exhibition, as one of the jury members. The initiative aims to change the narrative by turning the focus away from the victim and putting the spotlight on the perpetrator. Organised by Gordon Thomas Honeywell-GA & Ogilvy India in partnership with UN Women India, Girl Up (UN Foundation), reputed academic institutions like National Institute of Fashion Technology, Delhi (NIFT) and Symbiosis Institute of Business Management, Pune (SIMB), this initiative seeks to unleash the power of creativity to transform the way our society deals with survivors of rape & sexual violence, shifting the accountability from the survivor to the perpetrator.

“Art for Change is a project all about violence against women, which includes domestic abuse. It is about inviting ideas about how we can change the situation so the project moves people to act instead of being mute spectators,” he says.

Besides Delhi, Kureshi has been working a lot in Chennai. “We did a district called Kannagi Art District. I find cities in south India to be much more welcoming than the cities in north India. The art culture is there and people understand and respect the art as well as the artist,” he shares.

Similarly, Kureshi-led St+art has worked on creating Mahim Art district in Mumbai; Ukkadam Art District in Coimbatore and Maqtha Art District in Hyderabad. “Different cities have different styles. So in Maqtha, which is predominantly a Muslim district, we try not to paint portraits. The focus is to be more abstract in that space, trying to be more sensitive to the surrounds. It is also about encouraging people to own the art and the space,” he shares.

Ask him about the dream city to paint, Kureshi says: “We are okay with the metros that we are painting. There really is no dream city as such in our mind. The idea, however, is to go to cities where people are excited and reach out to the grassroots of India. For that is where the real artist would love to leave their mark.