A tale of change

A tale of change 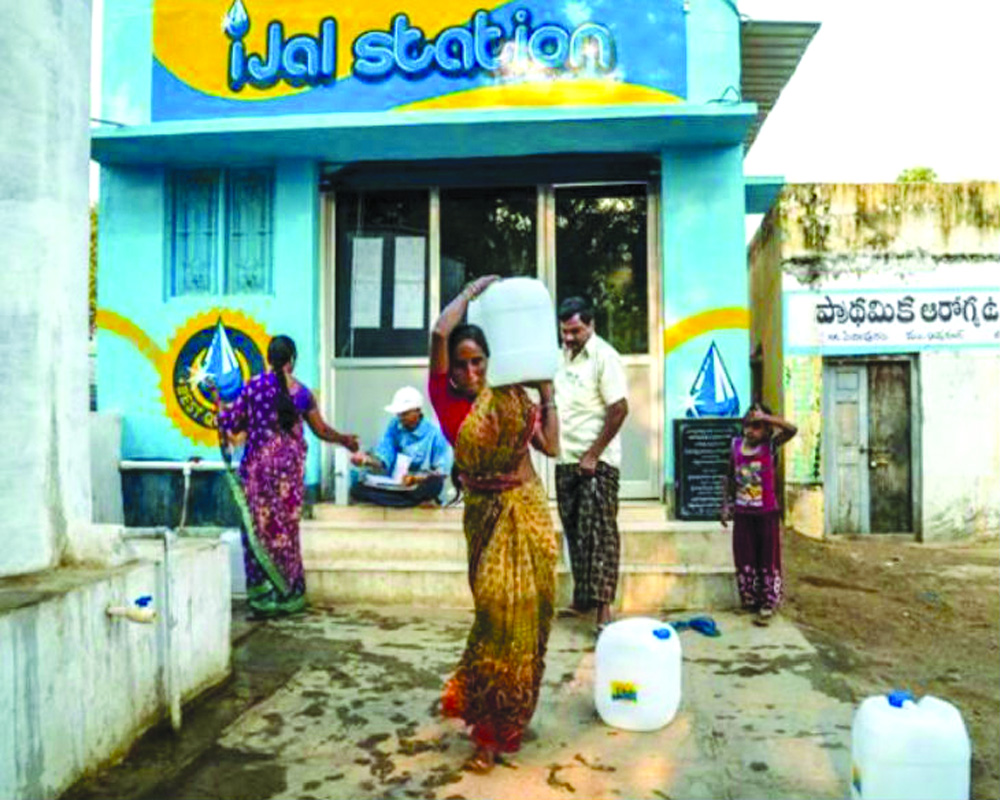 Water ATMs have been installed in several districts of Maharashtra which have led to a decline in the number of people falling sick. By Preeti Mehra

The black soil, locally known as regur in Maharashtra’s Aurangabad district, may be ideal for growing cotton, jowar and bajra, but its ground water is not potable. A drinking water quality report by the district’s health department in 2014 revealed that 4,387 of the 14,664 water samples collected were contaminated. In fact, the Aurangabad district reported 33 per cent water contamination in its nine talukas.

In almost all the villages, the primary source was ground water, which is generally extracted by a dedicated borewell or from an open well and supplied without any treatment to households. This is done in some cases through a direct pipeline or community stand posts.

However, the ground water level gets depleted for an average of five months every year from February to June. During these months, the village panchayats spend as much as `50,000 per month to supply households 200 litres each of tanker water for domestic consumption. Most families consume the tanker water without filtration, while some use muslin cloth to filter the particulate matter. But this process does not eliminate harmful bacteria or any virus present. The result was a recurrence of diarrhea and typhoid among the population.

“When we analysed the water quality, we found that water from all the major sources was unfit for consumption. The community feedback had been correct, and it was necessary to create an institutional mechanism that would provide safe drinking water to the residents,” recalls Vishnu Bhagwat Khedkar, the water expert at Sehgal Foundation.

His organisation in partnership with Anandana-Coca-Cola India Foundation selected five villages for a pilot project to install water ATMs. The 500 LPH (litres per hour) capacity RO systems, set up this year, will be managed and owned by the community. Though the initiative was conceived in 2019 and was expected to be operational by November 2020, it was delayed due to the pandemic. However, this month five water systems are up and running in two blocks of the district — Phulambri and Sillod.

Vaishali Dnyaneshwar Chopade, the ex-sarpanch of Wanegaon village, and presently a panchayat elected member, is gung-ho about the development. One of the early water ATMs was installed here and she has been seeing the difference it is making.

The pricing, the villagers say, is reasonable. The ATM water in the villages of Dongargaon, Wanegaon, Darigaon in Phulambri block, and Asadi, Sarola in Sillod block was fixed at a flexible price of `5 or `6 for 20 litres. However, for weddings and other functions it could cost a little more, but the price would not hit the roof as untreated tanker water did in the past. The ATM typically uses a card metering system where the card can be recharged when it runs out of cash.

It is not as if the villagers have woken up to their water perils recently. A private RO scheme had been put in place some years ago, but it failed badly due to poor maintenance and no planning involving the community. This time, the community-level system was strengthened before the execution of the project.

“The past experience tells us that involving the panchayat is not enough. So, we involved a school representative, a police official, women self-help groups and formed Water Management Committees which along with the panchayat and key leaders in the village, the Gram Sabha, endorsed the project. The members of the water committee were also educated on the proper usage of water and how to maintain the system. Monthly meetings were held to decide everything in detail, including the base price that villagers would pay for the RO filtered water. We also needed to build a corpus that would self-sustain the maintenance of the water system. For a start, a one lakh corpus was provided to the water committee to manage maintenance of the system for next one year and thereafter create its own fund for the same,” explains Vishnu.

It was decided that the panchayat would provide the raw water, the place where the system would be installed, and an electricity connection for the ATM. A bank account was also opened with the sarpanch, committee head and panchayat secretary as signatories. The foundation took care of training, maintenance and explaining how the water price needed to be calculated so that there was always surplus for maintenance. Wall paintings were put up across the village explaining the scheme and its uses. The water committee members were trained on the upkeep and use of the installed system.

What is most heartening is that the rejected water from the RO systems is stored in tanks and put to productive use. “The villagers are happy to have this water to wash their clothes, clean their houses, bathe their animals. And this is free for everyone. The villagers value every drop of water, hence, special effort is made to use rejected water properly,” says Vishnu.

Bhaskar Bhimrao Dakale, on the water committee of Dongargaon Kawd village and a beneficiary of the water ATM, recounts a touching tale of change. He says the water in his village used to be terrible. It was not uncommon to have ten to twenty sick people every week from 300 families that reside in his village. A doctor who used to make the rounds had a healthy business providing consultation and medicine to them. “The doctor now laments the water system. He says his business is gone as the patients have been reduced to single digit,” adds Bhaskar.

The pilot now provides a self-sustaining system of safe, clean drinking water to 10,000 villagers. It is hoped that more villages will be provided access to potable water in the future.

(The writer is a senior Delhi-based journalist who writes on development and environment issues.)