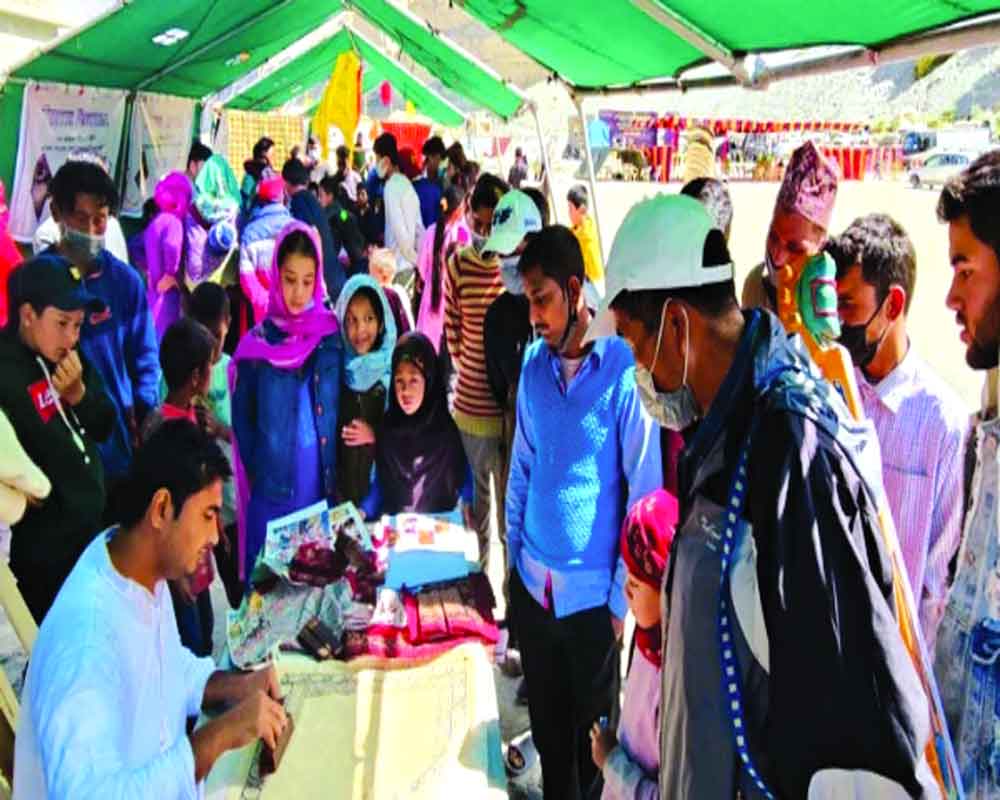 Mohammed Bilal Khatri, the master craftsman of Bagh print, is taking the art beyond the physical confines of his village, says Ruby Sarkar

With a splash of red, a hint of black, a deep indigo — Bagh print — made from natural dyes extracted from various plants and vegetables provides a source of livelihood for the people from Bagh village. It also upholds the importance of sustainable art.

The renowned traditional Indian handicraft is believed to be over 1,000 years old and is an important source of rural livelihood. From the Dhar district of Madhya Pradesh, it typically comprises geometric, paisley or floral motifs, predominantly in red or black. Mohammed Bilal Khatri, the master craftsman of Bagh print, has made significant contributions to the advancement and promotion of this traditional art form on both national and international levels. In September, he also got the opportunity to showcase his handicraft in a four-day long Turtuk Festival, organised by the Ministry of Culture.

This young artisan hails from Bagh village in Madhya Pradesh. He has learned this art form from his father, Mohammed Yusuf Khatri and grandfather Ismail Sulemanji. From the age of eight, he has been involved in this traditional handicraft and has gained more than 20 years of experience. In 2011, he was awarded the National Merit Award by the Ministry of Textiles, Government of India, followed by Russian Diploma Award from International Ethnomir ‘Dialogue of Cultures- United World’ Fund in 2014.

Sharing his experience at the Turtuk Festival, he said, “I was really delighted to be honoured by the Ministry of Culture of Government of India and secondly, by the Turtuk Executive Councillor, Ghulam Mehndi on behalf of the administration. Furthermore, coming to Turtuk village and interacting with the locals provided me with a sense of peace.”

Turtuk, the last village of India, is approximately 203 km away from Leh in the Union Territory of Ladakh. The village was under the control of Pakistan after 1947, but India regained it after the war of 1971. To mark 50 years of this historic accomplishment, the Indian government organized Turtuk Festival under ‘Aazadi Ka Amrit Mahotsav’ — an initiative to commemorate 75 years of its rich history, diverse population, culture and achievements. A total of 200 artisans from across India participated in this festival, Bilal being one of them.

“I provided complete information to the locals about the historic importance of this art. They showed great interest in knowing more about Bagh print and also tried their hand at stamping the prints,” informed Bilal.

According to him, the beauty of Turtuk, which is situated amidst the ancient Shyok river and snow-clad Himalayas, coupled with its generous locals, is unparalleled. “This area is surrounded by the Karakoram Mountain range. As far as the eyes can see, there are mountains. And besides the natural beauty, even the people here are so simple,” shared Bilal heartily.

Further, diving deeper into the details of this traditional handicraft, Bilal mentioned that the printing of Bagh prints and the treatment of fabric is a multi-stage process, which includes colour treatment, fabric soaking, boiling, drying, washing and printing. These steps are usually repeated depending on the number of colours used on the fabric.

“The process starts with soaking the fabric in raw salt, hot water and goat dung. This step is the reason for the light-yellow colour of the fabric. After this, the fabric is washed, spread and dried in the open. At this stage, the red colour is extracted by soaking and boiling tamarind seeds and alum in a big copper vessel. The red colour distinguishes the Bagh print,” explained Bilal.

The blocks are made with great precision to complement cotton, crepe, silk and other types of fabrics. After this, the fabric is spread on a plank or a table with many layers of jute, straws and fabrics which provides a flexible base for block printing, which is done skillfully by the artisans. The red colour extracted from tamarind seeds is highlighted using different blocks. There are many patterns including flowers, leaves and traditional sculptures.

“Till further instructions, the artists use their imagination to bring fabric to life by meticulously embossing the designs,” he added.