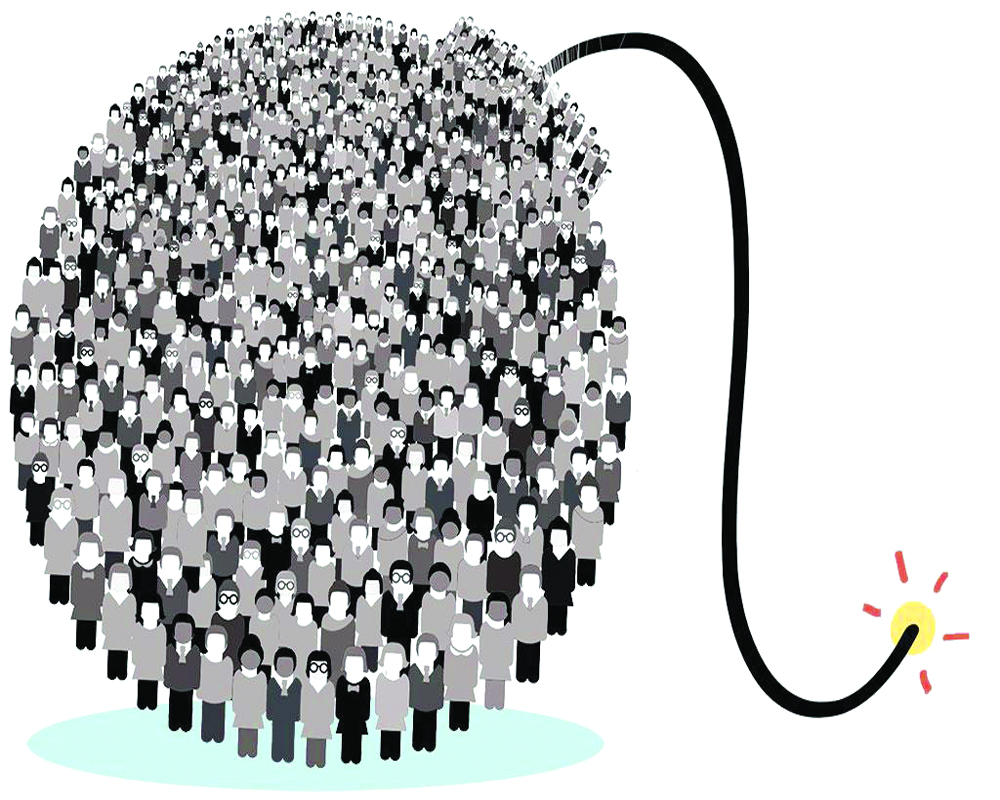 The catchy phrase ‘population explosion’, used in the context of the ever-increasing human race, is now widely murmured in elite circles. Today, every corner of India is a naked display of the increasing throbbing sea of humanity. Whether one goes to the railway station, airport, road, bus stand, hospital, shopping mall, market, temple or even at marriages, one can just see that all these places are overcrowded at every point of the day — even while we are dealing with a pandemic. This is a clear indication of overpopulation in our country. According to the 2020 final report of a technical group on population projections, India’s population is expected to grow by 25 per cent, referring to the 2011 census, to 1.52 billion by 2036. If these numbers are to be believed, then India will overtake China as the world’s most populous country by 2031. These figures have rightly been taken, by policy-makers, as a warning that any more feet-dragging will prove dangerous, for, if the population continues to grow at the present rate, then it would be a very difficult situation.

Currently, about 60 per cent or an estimated 812 million people of this country live below the poverty line and if the population growth rate is not arrested or abated even now, the problem may wreck the country's social fabric, increasing the level of unemployment and under-employment even more and further affect the benefits of economic development being imparted to people at the lower strata. Some knowledgeable people have warned that when we reach that point of population growth, we will not have adequate resources for living accommodations on this planet and our life will then be like those rats who are overcrowded in a cage or trap, suffering not only because of the absence of even minimum necessary space but also from the mental stress caused by the extreme overcrowding.

Over the years, various governments and statesmen have taken various steps to control the tremendous population growth, however, despite their efforts, the growth rate has only accelerated. The reason behind this rapid growth is man’s lack of control over sexual tendencies and that is what needs to be tackled at that level. Sterilisation and other methods deal with the issue at a very gross level. The real, and better, solution lies in spreading awareness among people and changing their attitudes because the problem is rooted deeply in their minds, attitudes and values. In such a scenario, one would have expected that the past or present government over the years would have sought the guidance, co-operation and participation of religious and spiritual institutions also since a majority of the people in India have some religious affiliation and what is explained to them on religious grounds has great sentimental value and emotional appeal for them. And, as we all know, every genuine religion appeals to its adherents to conquer lust and to observe restraint. Now, it is for the government to shed its inhibitions and seek the active co-operation of such institutions of spiritual education by appealing to religious institutions of the country to lay due emphasis, in their preachings or teachings, on practising self-control. To make people aware of the seriousness of this problem, let all religious-spiritual institutions announce the coming year as the Year of Self-Control and then, in the end, let us see what are the results. Remember, unless the attitudes and lifestyles of people are changed the situation would remain unresolved. So, let's resolve to practise self-control and create mass awareness to relieve Mother Earth from the burden of the increasing population.