The legacy of truly martial Wellington

The legacy of truly martial Wellington 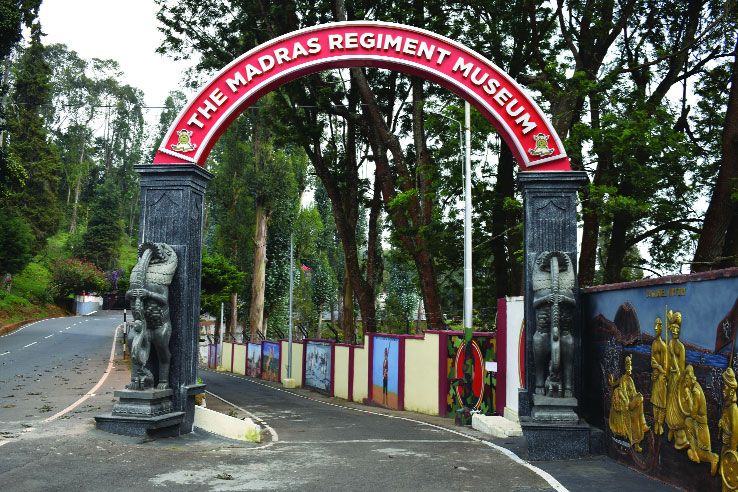 Wellington (in the Nilgiris, not New Zealand) derives its name from the famous Duke who earned his spurs in campaigns he fought in India. The place has four unmissable landmarks: Madras Regimental Centre (MRC), Defence Services Staff College (DSSC), Wellington Gymkhana Club (WGC) and Stavka. Here is a snapshot of each.

The MRC is housed around Wellington Barracks, renamed Srinagesh Barracks after the former Army chief and first Indian Colonel of the Regiment. The first military unit to occupy Wellington Barracks was the 74th Highlanders in 1860. The barracks design is unique, a blend of Napoleonic and Prussian styles. The tunnel entrance through the Assaye Gate leads to a quadrangle of barracks and virtually into an amphitheatre, giving the recruit the sense of a gladiator, walking into a vast space filled with sunshine. The work done to enhance the military splendour and the environment of MRC is breathtaking — courtesy cumulative efforts of Commandants, including incumbent Brig Rajeshwar Singh.

‘Namaskaram’ is the salutation of the Thambi, owing its origin to the Madras Native Infantry which is the oldest infantry regiment of the Army though the Punjab Regiment claims a march ahead. The Thambi, the Madras Regiment, now recruits from Kerala, Karnataka, Andhra Pradesh, Telangana and, of course, Tamil Nadu. Among its famous pre-Independence battles is the epic at Assaye during Second Anglo-Maratha War in September 1803. A number of Madras Native Infantry units fought fearlessly and, though outnumbered, Maj Gen Arthur Wellesley, the Duke of Wellington, spearheaded the victory. “Winning the Assaye battle was more difficult than Waterloo in 1915,” he ruminated.

The Madras Regiment’s post-Independence tally of battle and theatre honours is staggering. More than once, it has been adjudged the best marching contingent at the Republic Day parade. The pièce de résistance of MRC is its grand war museum, one of the best in the country. It is state-of-the-art and imaginatively laid out into nine hexagonal and two linear galleries covering every facet of Amar Thambi: From early history to the Hall of Fame. One can spend hours inside but do ask for the mobile Thambi encyclopaedia, Maj Navjot Dhaliwal, to enrich your tour.

Defence Services Staff College: ‘To War With Wisdom’, surrounded by symbolic owls, is the DSSC motto. It is a superbly laid out real estate, perfectly conducive to placing well-rounded heads on square shoulders. Tamilselvam, worlds apart from LTTE’s political czar, manages the well-stocked Officers’ Mess bar. It is here that a just arrived Air Force Gp Capt is greeted by an older Army Colonel Directing Staff with: “Haven’t we met before?” Short pause. “We were in NDA, no?” guffawed the Gp Capt. They were meeting after 20 years; such is the magic of India’s premier triservice academy. The DSSC is the second stage of jointness and integration before the third step into the ultimate institute of cross-learning, National Defence College, New Delhi. The aesthetic makeover of the college, coupled with transformational restructuring of the syllabus, makes it a truly unified institution. Majors and equivalent ranks in the other two services are equipped here to take up higher Command and Staff appointments. The DSSC imprimatur is a young officer’s open sesame to higher rank and responsibility. All things being equal, the clincher is: “Has the officer done Staff College?”

Wellington Gymkhana Club: Built in 1863 for British civil and military officers, the idea of the meter gauge railway from Mettupalayam to Ootacamund with Wellington as one of its stops was born in the club’s Gun Bar over cherry brandy between two wise owls. Tennis and squash courts, a croquet course and the challenging golf course trespassing the Staff College are in play. The Par 3 Fifth hole is as notorious for Hole in One as balls lost in crisscrossing streams. Little has changed in the geography and architecture of the Club except the Perch recently constructed to touch the fir and pine trees engulfing the club. In the 1960s, waiters used to address the clientele as ‘Master’. Today, it’s become ‘saab’/Sir.

Stavka: Stavka, which in Russian means High Command, is perched on a hillside on the Kotagiri Road and is the residence of Sam and Silloo Manekshaw. Three km beyond Simp’s Park, a high-gradient road on the right climbs up to it. Two Gorkha Gurung names are carved out on a rock below a temple near the gate constructed by them.

The ‘beware of dogs’ sign is misleading as the three canines along with three Gorkha housekeepers are extraordinarily friendly. Last month, a bear commandeered the Gurungs’ rations, even opening their refrigerator to remove mango juice. They laughed: “Our rum is safe.” On another occasion, a leopard was seated regally on the roof of the Gorkha outhouse. Even ‘Aayo Gorkhali’ did not help. The Manekshaws settled into Stavka after the Government’s promise to make Sam CDS/Member UPSC never materialised.

From the large verandah, a peek is possible of the dome of DSSC which Sam commanded. An original Maruti 800 and a Sunbeam Talbott are functional. The Manekshaws’ cellar has dried up with a rare bourbon bottle remaining. The Gorkhas keep the lawns and gardens manicured and Stavka spick and span as if Silloo and Sam were still around.