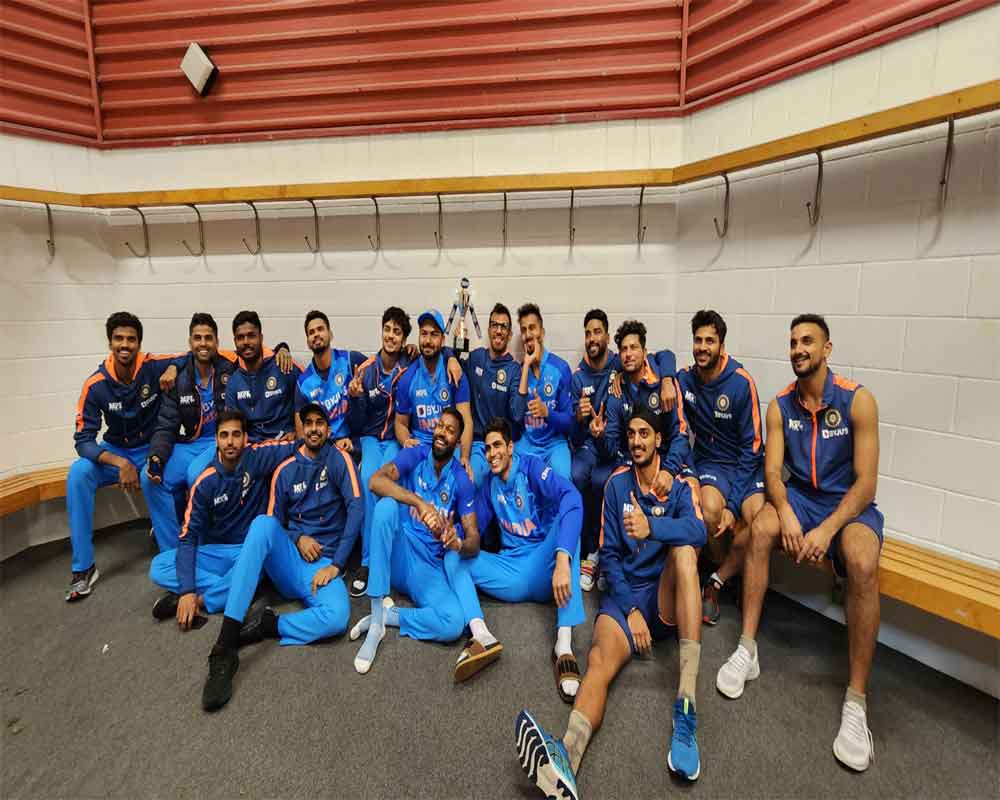 Arshdeep Singh and Mohammed Siraj stopped New Zealand in its tracks with game-changing spells before India won the rain-marred third and final T20 via Duckworth-Lewis method to claim the three-match series 1-0, here Tuesday.

Arshdeep and Siraj fired in tandem and shared eight wickets between them as India bowled New Zealand out for 160 in 19.4 overs after the hosts elected to bat.

The hosts lost eight wickets for just 30 runs after Devon Conway (59 off 49 balls) and Glenn Phillips (54 off 33) had propped up their innings.

In reply, India were precariously placed at 75 for 4 when rain stopped play. It was a DLS par-score at that time. The game never resumed and ended in a tie.

Rishabh Pant (11) after a couple of intent-filled boundaries played a lousy shot to get dismissed and Suryakumar Yadav (13) had a rare low score.

Skipper Pandya, who didn't bowl a single delivery in the series due to stiff neck, had scored a nice little 30 off 18 balls when heavens opened up.

However the last time, it was a comprehensive 5-0 win during the summer season and this time around, there was little context post T20 World Cup.

The sole point of interest was to check how India's probable long term T20 captain Pandya and a new-look team fared.

But with opening match completely washed out and final game also suffering due to inclement weather, there was little to take home apart from Suryakumar Yadav's glorious series-winning hundred in Tauranga and Siraj emerging as potent T20 option in favourable conditions.

After New Zealand opted to bat, India got their first breakthrough when Arshdeep had Finn Allen trapped in front of the wicket with a full delivery that swung in from around middle.

Allen thought about a review before deciding to walk back as the ball was clearly going to hit the stumps.

Veteran Bhuvneshwar Kumar bowled a tight third over before Conway decided to take on left-arm seamer Arshdeep, carting him through mid-wicket for a four before lofting the bowler over extra cover for a six.

He then chipped one over the pacer's head for a lovely boundary.

The fourth over yielded 19 runs and it seemed New Zealand were on their way. Bhuvneshwar Kumar conceded 14 runs in the next over as the Kiwis looked to end the powerplay, their weak area in recent times, on a strong note.

However, a bowling change put paid to all such hopes as Siraj dismissed Mark Chapman for a run-a-ball 12. Against a length ball on middle and leg, Chapman got a leading edge while trying to flick and Arshdeep completed the catch without much fuss, ending a brief but brisk partnership.

After conceding 33 runs in two overs, the Indian bowlers fought back strongly to concede only 17 runs in the next four.

Conway broke the shackles with a boundary off Yuzvendra Chahal as New Zealand reached 74 for two at the halfway stage of their innings.

In a subdued start, the big-hitting Phillips found a couple of boundaries before hitting Chahal for a four and a huge six off successive balls to help his team go past 100 in the 13th over.

Phillips them launched himself into Bhuvenshwar, smashing a four and a monstrous six that landed on the roof at McLean Park.

As many as 31 runs came from over number 12 and 13, before Phillips smoked Harshal Patel over deep square leg for another maximum.

However, Phillips got a top-edge against Siraj and Buvneshwar took the catch in the deep in what was a massive breakthrough for the tourists.

Phillips' dismissal triggered a collapse as the the hosts lost their remaining wickets for very little.