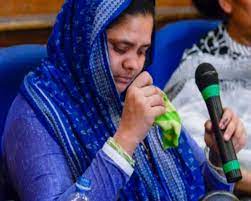 Bilkis Bano on Wednesday challenged the remission of sentence and release of convicts in the 2002 rape and murder case filing a plea before the Supreme Court.

The top court said it will consider listing the matter for hearing.

A bench comprising Chief Justice D Y Chandrachud and Justice P S Narasimha took note of the submissions of lawyer Shobha Gupta that the victim herself has challenged the grant of remission and release of the convicts, and the matter be listed for hearing.

She said that Justice Ajay Rastogi, who was part of the bench which had heard other similar pleas against the remission, was now part of a Constitution Bench hearing.

"The review has to be heard first. Let it come before Justice Rastogi,” the CJI said.

When the counsel for Bano said let the matter be heard in open court, the bench said, "Only the court concerned can decide that."

The CJI said that he would take a call on the issue in the evening.

Earlier, a bench of justices Ajay Rastogi and C T Ravikumar had said that it would hear a fresh plea moved by a women's organisation, National Federation of Indian Women, challenging the remission of sentence and the release of convicts in the case.

The gang-rape case also involves the killing of seven of Bano's family members during the 2002 Gujarat riots. Bano was gang-raped while fleeing the riots that broke out after the Godhra train burning incident.

Her three-year-old daughter was among the seven of her family who were killed.

The 11 men convicted in the case walked out of the Godhra sub-jail on August 15 after the Gujarat government allowed their release under its remission policy. They had completed more than 15 years in jail.