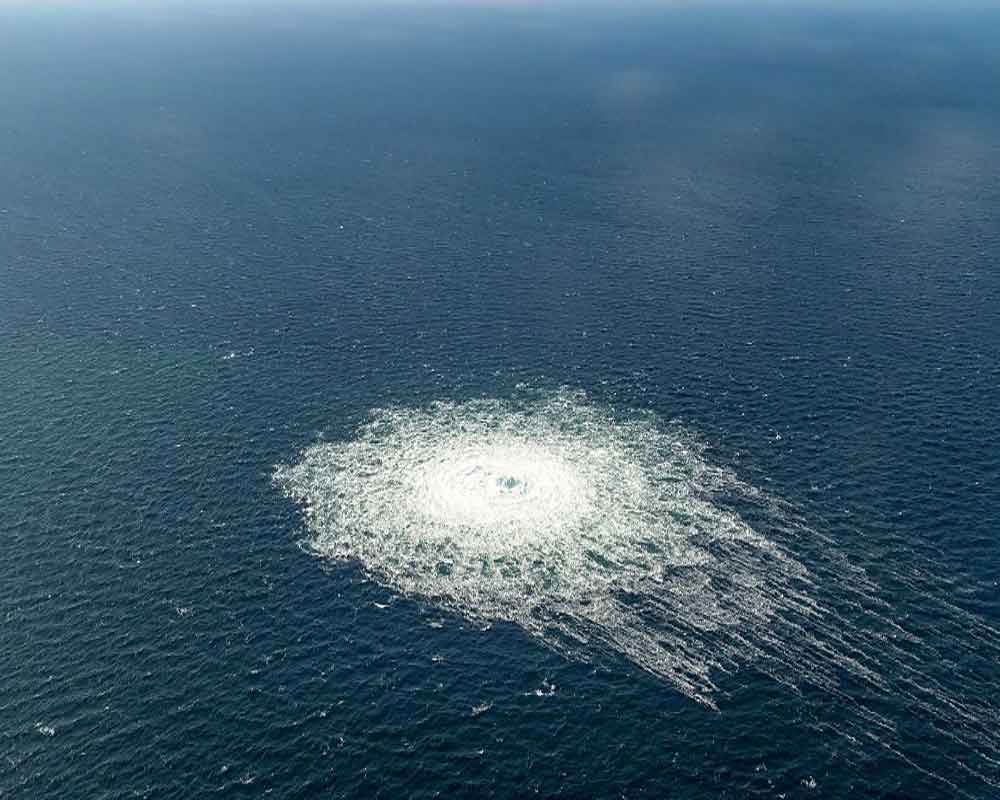 The explosions that rocked natural gas pipelines under the Baltic Sea ahead of huge methane leaks “probably corresponded to an explosive load of several hundred kilos (pounds)," Denmark and Sweden wrote Friday in a letter to the United Nations.

Norwegian researchers published a map Friday projecting a huge plume of methane released by the damaged Nord Stream 1 and 2 pipelines will travel over large swaths of the Nordic region.

Moscow has requested an emergency meeting at the U.N. Security Council to discuss the pipelines and called for a thorough international probe to assess the damage to the pipelines, which carry natural gas from Russia to Europe. Russia says “it looks like a terror attack, probably conducted on a state level.”

Norwegian researchers published a map Friday projecting a huge plume of methane released by the damaged Nord Stream pipelines will travel over large swaths of the Nordic region.

The map released by the Norwegian Institute of Air Research shows the expected path the planet-heating gas is likely to take following leaks in the Nord Stream 1 and 2 pipelines.

“We assume the wind on the leak area blew the methane emissions north until the Finnish archipelago, then bends toward Sweden and Norway,” Stephen Platt, a professor with the Norwegian Institute for Air Research, said.

The independent institution is part of the Integrated Carbon Observation System, a European research alliance, which said s was confirmed by ICOS ground-based observations from several stations in Sweden, Norway, and Finland.” the “enormous amount of methane gas” emission

These methane levels aren't dangerous to public health but the gas is a potential source of global warming.

The Danish and Swedish governments have described the ruptures as the result of “deliberate actions.”

Russia also has said the leaks resulted from deliberate acts, saying “it looks like a terror attack, probably conducted on a state level.”

Moscow requested an emergency meeting at the U.N. Security Council to discuss the pipelines and called for a thorough international probe to assess the damage to the pipelines. Kremlin spokesman Dmitry Peskov said a study would only be possible once gas stops leaking from them.

Nordic seismologists recorded explosions preceding the leaks. A first explosion was recorded early Monday southeast of the Danish island of Bornholm. A second, stronger blast northeast of the island that night was equivalent to a magnitude-2.3 earthquake.

NATO warned Thursday it would retaliate for any attacks on the critical infrastructure of its 30 member countries and joined other Western officials in citing sabotage as the likely cause of damage to the natural gas pipelines. Denmark is a NATO member and Sweden is in the process of joining the military alliance.

The first leaks in the pipelines that extend from Russia to Germany were reported on Tuesday, prompting energy companies and European governments to beef up security.

Energy infrastructure security has increased across the Nordic region.

The fear of further damage to Europe's energy infrastructure has added pressure on natural gas prices, which had already been soaring.

Russia, a major supplier to Europe, cut off deliveries earlier this year in retaliation for sanctions imposed after its invasion of Ukraine. That has caused widespread economic pain across the continent.

Authorities in Norway, a major oil and gas producer, have reported at least six incidents of drone sightings near offshore installations in the North Sea.

It prompted the Petroleum Safety Authority Norway -- the Scandinavian country's oil safety regulator -- on Monday to “urge increased vigilance by all operators and vessel owners.“ On Wednesday, Norwegian Prime Minister Jonas Gahr Støre said that there was no concrete threat against Norwegian oil and gas off-shore installations.

Danish daily newspaper Ekstra Bladet said a drone was spotted Wednesday near a Danish offshore oil and gas installation in the North Sea.

Sweden stepped up security around its three nuclear power plants.

Sweden's public power transmission network operator Svenska kraftnat, said that it doesn't not yet know if an undersea power cable that runs between southern Sweden and Poland was damaged when the Nord Stream gas pipelines some 500 metres (547 yards) away ruptured from what Western and Russian officials both claimed was intentional tampering.

“Since the cable is not in service, it can't be determined if the cable is damaged in some way,” Per Kvarnefalk, a spokesman for Svenska kraftnat, said late Thursday. “We will therefore perform tests on the cable using special measurement equipment early next week with the aim to determine if the cable is fully functional.”