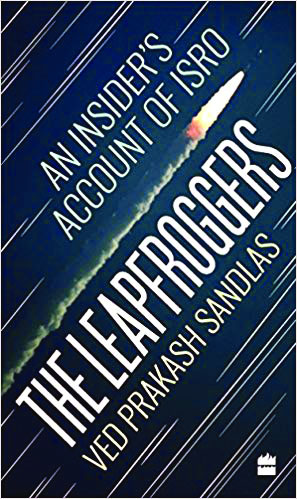 The Leapfroggers manages the rare feat of making the story of India’s success in the field of space science accessible to lay readers, writes Kumar Chellappan

The success of a scientist depends on how effectively he/she communicates with the common man. That talent is rare. The proposed Indian Neutrino Observatory coming up at Theni is a good example. Though scientists hold meetings all over Tamil Nadu to explain that the INO would in no way affect the environment and ecology of the Western Ghats, people are not convinced.

The CERN (acronym for European Organisation for Nuclear Research) experiment with its Large Hadron Collider experiments too failed to break ice with the common man. The Chief of CERN, who was in India some time back, failed to give a convincing answer to the question about how these experiments were going to benefit humanity.

There are certain research and development establishments and organisations which the common man considers as a part and parcel of his daily life. Indian Space Research Organisation (ISRO) is one such institution. We have more than 1,000 satellite television channels bringing events happening across the world ‘live’ to our drawing rooms. The country’s weather forecasts, which were a butt of jokes in the 1960s and 1970s because of the standard phrase “It may or may not rain  tomorrow” have become sharp, thanks to ISRO’s remote sensing satellites.

The country’s access to space was not a smooth affair. Engineers of ISRO built the country’s launch vehicles from scratch. Today, India is the preferred location of the community of nations across the globe to deploy satellites weighing up to 1,000 kg into the low earth orbit. We have seen even countries like the USA, Britain, and France making a beeline to ISRO to launch the satellites made by them because india’s launch charges are affordable and dependable.

The Leapfroggers: An Insider’s Account of ISRO (published by Harper Collins) is  the story of how India developed its launch vehicles literally from scratch. The author Ved Prakash Sandlas, passed away on July 6, 2017, a year before his work hit the stands.

Sandlas, an electronics engineer from Indian Institute of Technology, Kharagpur, joined Thumba Equatorial Rocket Launching Station near Thiruvananthapuram in 1967. He was mentored by APJ Abdul Kalam, the then project director of the Satellite Launch Vehicle (SLV) development mission and was fortunate enough to be guided by Vikram Sarabhai, the founding father of India’s space programme. Sandlas’ is the story of a boy born in a lower middle class family in New Delhi rising in life through hard work and perseverance.

There was a time when students interested in physics would assemble electric calling bells, radio sets and even transmission equipment with components collected from neighbourhood kirana stores. Sandlas was one such student. He assembled many electronic gadgets and went on to become a Ham Radio operator by the time he completed his undergraduate studies in physics.

His interest in Ham Radio came handy when he was posted in the SLV mission to develop a communication system. Sandlas’ writing style is reader-friendly. He even shares hilarious anecdotes from his time at Vikram Sarabhai Space Centre Trivandrum. Why Leapfroggers? He explains: “Leapfrogging is not like long-jumping where one builds momentum by a long enough run, and then jumps to land on sift and loose sand. Leapfrogging relies upon stored energy — in the legs, muscles, brain, and the entire body — to leap above unexplored territory, with calculated risk, sometimes falling flat on the face and sometimes exposing the dirtier underside”.

The Leapfroggers gives the reader a first-hand and passionate account from a space engineer who lived for electronics and communications. It is a must read for those interested in India’s Space missions and those youngsters who are keen to pursue a career in space science.