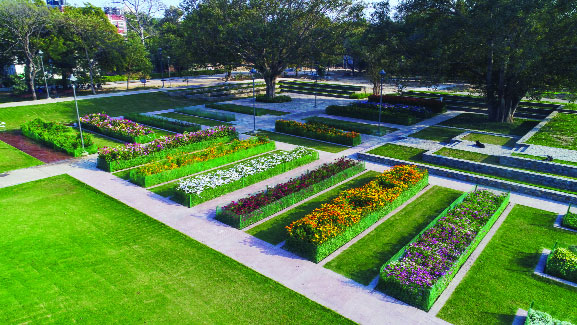 The Sunder Nursery is a haven among the urban jungle reminding the coming generations that decay is not all that stands ahead. By Uma Nair

To restore, to create, to revitalise and rejuvenate beautiful green spaces has been one of the prime goals of the Aga Khan Trust for Culture in recent years and Chief Architect and CEO, Ratish Nanda has been a part of the restoration and redevelopment project of the Sunder Nursery for more than a decade.

The TIME Magazine’s declaration of naming the Sunder Nursery (Delhi’s Central Park) amongst 100 Best Places in the World comes as a moment of recognition even as it affirms the need and urgency to create green lungs in a country that has forgotten its history, and its temples and monuments stand like fossils in a time warp.

History states that parks became a source of entertainment after the French Revolution ended in 1799. More people started going to parks; a pastime that belonged only to the rich but was made available to everyone. Recognising this growing need for public parks, emperor Napoleon III, Baron Hausmann, and engineer Adolphe Alphandunder created an urban renewal plan which swept France.

This undertaking saw the development of multiple parks and green spaces throughout France, which included a park at each of France’s cardinal points, and the placement of trees to line the main avenue in Paris, the Champs-Élysées. In 1870 alone, the acreage of parks in France increased from 47 to 4,500 and by this time, 2,300 varieties of plants had been introduced to the country.

By 1860, the French journalist Eugène Chapus wrote: “One of the pronounced characteristics of our Parisian society is that . . . everyone in the middle class wants to have his little house with trees, roses, and dahlias, his big or little garden, his rural piece of the good life.” Anchored by scenic settings and recreation, New York’s Central Park was designed in the spirit of Parisian public parks of the same period.

The Sunder Nursery development in Delhi has been christened the Central Park because it has recreated New York’s central feature by blending landscape architecture, city planning and urban park management; and ever-changing notions about recreation, democracy, and the role of public space in relation to both.

The AKTC states that the Ministry of Housing and Urban Affairs, the Central Public Works Department, and the Archaeological Survey of India, as well as  the Norwegian Ministry of Foreign Affairs and the US Embassy through the US Ambassadors Fund for Cultural Preservation have all been part of this great plan. Architect Ratish Nanda recalls the services of  hundreds of craftsmen — stone carvers, plasterers, masons and gardeners. Nanda also reveres the  memory of the late Professor M Shaheer. “He worked with the Aga Khan Trust for Culture for 18 years as the landscape architect for the Humayun’s Tomb as well as restorations in Kabul and in Hyderabad. His contribution to the Sunder Nursery project was immense, from the original master plan through to the detailed drawings,” he said.

The Sunder Nursery grounds belong to India’s cultural history. It was nearly seven centuries ago, when the Sufi Saint Nizamuddin Auliya, walked these paths and shared his teachings of universal love. His message of tolerance and humanity  infused the Mughal empire and assisted by the Grand Trunk Road spread throughout the country. What ensued was the dispersing of a remarkably pluralistic and harmonious spirit.

For Nanda and his team the Sunder Nursery beholds the same spirit of universal harmony. Aligned with the large entrance plaza of Humayun’s tomb, Sunder Nursery features a spectacular pedestrian central axis conceived in three parts, as a progression of formally arranged gardens around the heritage structures and merging at its end with the proposed arboretum and water gardens.

“An arboretum exhibiting the flora of the Delhi region was a central objective of the landscape plan,” explains Nanda. “This recreates various micro-habitat zones of the NCR, showing the richness and versatility of the native or naturalised flora; these include kohl (hill), khadar (riverine), bangar (alluvial) and dabar (marshy) zones, which are all representative of Delhi’s fast disappearing biodiversity.”

As Delhi’s first arboretum, it has almost 300 tree species, the largest number in any of Delhi’s parks. A contiguous stretch of dense green cover across Sunder Nursery continues on to the adjoining National Zoological Park and the Batashewala Complex, providing a protected bird habitat for the ground nesting national bird, the peacock.

“Over the last decade, hundreds of truckloads of construction rubble were removed and 20,000 saplings planted, drawing 80 species of birds to the site. Many more are expected now that the water bodies are full. 60 species of butterflies have already made the park their home,” affirms Nanda who has worked hard to create an oasis of biodiversity.

In more ways than one, the Sunder Nursery preserves the past and honours the future and that is the message for the millennials that urban decay need not be essential to modern day living. Between the water gardens and the horticulture haven here’s a piece of history that brings harmony.