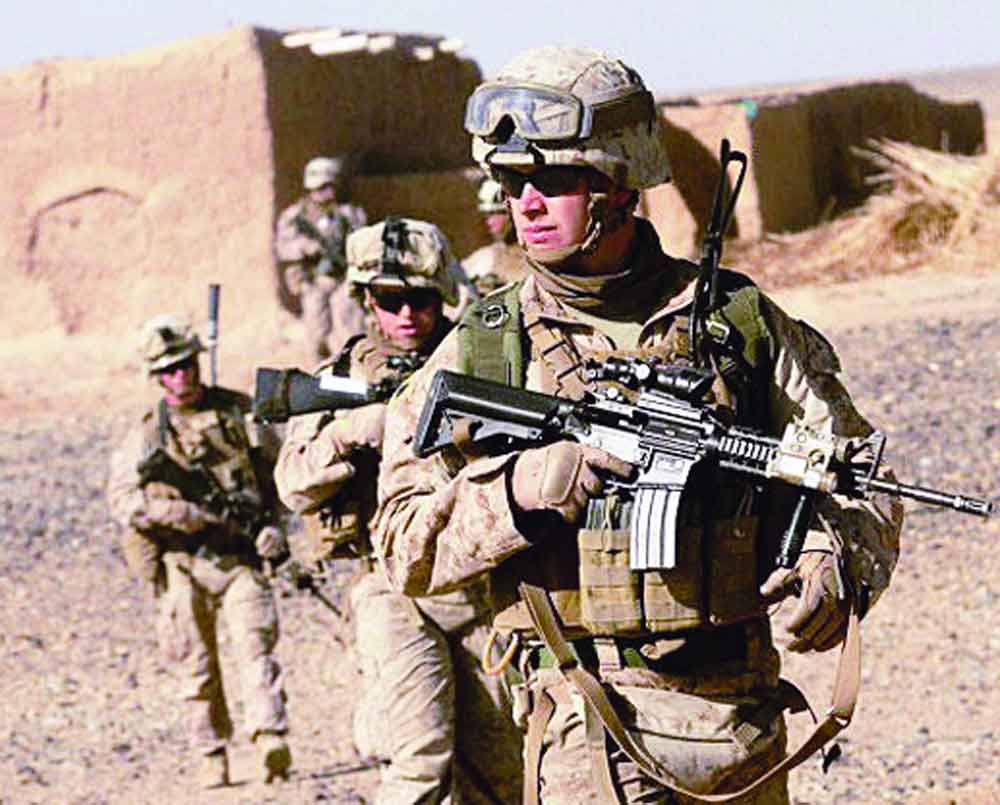 Late in the last week of December 2018, for a full one week, reverberations from US President Donald Trump’s surprise announcement to cut 14,000 American troops from Afghanistan by half continued to rock Kabul like serial suicide attacks by the Taliban. Trump’s decision (including the withdrawal of 2,000 combatants from Syria) was motivated by getting most troops back home to defend the US’ borders; though it was more related to the 2020 presidential elections. Besides, Defence Secretary James Mattis’ resignation, this announcement created an uproar among the US allies. Then after a week, suddenly, a White House National Security Council spokesperson announced that Trump had not made any decision to cut troops in Afghanistan. Both, Chairman, Joints Chiefs of Staff, Gen Joseph Dunford and Commander of the US forces in Afghanistan, Gen Scott Miller, said that they had received no orders for troop cuts in Afghanistan. But if they do — and they had been working on it — it would be all right. Trump has remained silent, so esoteric is decision-making in the White House.

Any hint of de-induction of the US forces — at a time when the peace process in Afghanistan is uncertainly poised — would amount to a partial victory for the Taliban, whose prime demand is the exit of foreign forces; and also destabilisation of US Envoy Zalmay Khalilzad’s vigorous attempts for face-to-face talks between Kabul and the Taliban. The last time such talks were wrecked was in 2016, under the Pakistan-sponsored newly-constituted Quadrilateral Coordination Group, comprising the US, China, Pakistan and Afghanistan, as the Taliban failed to show up. The Taliban’s absence meant Pakistan signalling its centrality to the peace process. This outraged the then US President Barack Obama so much that Taliban supremo Mullah Akhtar Mansour was taken out in a drone strike in May 2016.

Was the now rescinded Trump decision a fallout of  the failed peace talks at Abu Dhabi, once again sponsored by Pakistan, last November? This time around, the Taliban refused to meet the 12-member Kabul delegation after three meetings with Khalilzad in the last six months. Pakistan and the Taliban have again publicly let down the US. Remember, Trump had written to Prime Minister Imran Khan in December after his “all we’ve got from Pakistan is lies and deceit” jibe and sought his help. Khalilzad then flew to Islamabad to meet Gen Qamar Javed Bajwa.

It is a truth, universally acknowledged, that the road to Kabul passes through the General Headquarters, Rawalpindi. Khalilzad met a four-member Taliban delegation,   asked for a six-month ceasefire and name members of a future care-taker Government. The Taliban rejected a ceasefire, adding  that its nominee be appointed to head a care-taker Government and if the UAE, Saudi Arabia and Pakistan stand guarantors, a ceasefire could be considered. The new  Abu Dhabi dialogue format included the above-mentioned countries that the Taliban demanded and the only ones which had recognised the Taliban Government in 1996. Never earlier had all the boxes for talks with the Taliban been ticked as before Abu Dhabi. Still, Trump in double entendre, said, “We are in very strong negotiations but have little confidence talks will succeed”. Khalilzad met the Taliban for a third time in Abu Dhabi where he was told, according to Taliban spokesman Jabidullah Mujahid: “We will talk to the US only when foreign forces leave Afghanistan.” The official outcome at Abu Dhabi will never be known, but in sum, Khalilzad met with the Taliban, who in turn rejected the idea of turning proximity dialogue into face-to-face talks with Kabul (as it is a US puppet).

Afghanistan President Ashraf Ghani has also been under immense pressure, domestically and by Trump, to talk to the Taliban. He has been most earnest in his efforts since he became the President in a controversial election in 2014. Ghani met the then Army Chief, Gen Raheel Sharif, in 2015, which led to the Murree talks in July 2015. The talks were derailed as Rawalpindi tried to hoodwink  Kabul with a Mullah Omar-recorded statement when he had died two years earlier. Then the 2016 fiasco happened. Still, in February 2018, Ghani offered unconditional talks and ceasefire, which were accepted for only three days during Eid by the Taliban. The Afghans remain hopeful of some agreement to end violence before the presidential elections in April 2019. Khalilzad wants the elections to be postponed to accommodate the Taliban.

Despite the onset of winter, Taliban suicide attacks in Kabul continue with deadly precision and regularity. One of the reasons for Trump’s decision to pull out was US combat deaths, which have risen to double digits in the last six months. In the UN last November, Ghani said that 30,000 Afghan soldiers and police had been killed since 2015. This is much lower than the actual number. Civilian casualties ranged between 800 and 900 in 2018, which is a 40 per cent increase over 2017 figures. US Central Command chief Gen Kenneth Mackenzie said that combatant death rate cannot be sustained unless training, recruitment and desertion issues are fixed. The latest report (November 30, 2018) of the Special Inspector General for Afghanistan Reconstruction described the present condition as an “impasse.”

After parroting for years that India has no legitimate role in Afghanistan, it was surprising that Pakistan Foreign Minister Shah Mohammed Qureshi said on December 10  that India also has stakes in Afghanistan and its cooperation will be needed as Pakistan alone cannot bring peace to Afghanistan. In September 2017, Pakistan had accused India of being a spoiler in Afghanistan. Briefing the media after Mattis’ visit to India, the Pakistan Foreign Affairs spokesperson noted: “Under the garb of development assistance, India has been using Afghanistan soil to carry out subversive activities against Pakistan”.

So why this strategic benevolence? Is Pakistan making a virtue out of necessity? For its failure to do US bidding — bringing the Taliban around for direct talks with Kabul —  Islamabad in the past used the alibi it has limited influence and control over the Taliban. This is patently untrue and only a bargaining ploy.

Qureshi’s suggestion, that bringing the Taliban for talks is a shared responsibility, explains the lean on India which has some influence on Kabul. Rawalpindi is telling the US “we can bring the horse to water but we cannot make it drink.” Mattis’ resignation over troops pullout may be less justified than his abject failure to make his “last chance” threat for Pakistan work. He had assured US Congressmen in the context of Afghanistan in 2017 that it would work. Because Rawalpindi, if it wants, can make the horse drink water.