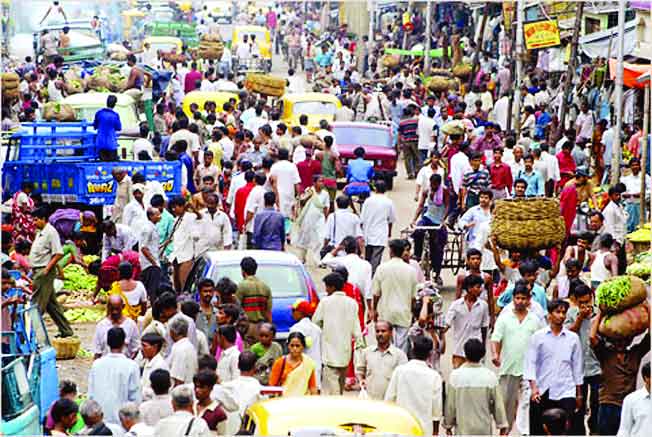 We will be in serious trouble if our population growth is not addressed far more seriously. Even with declining growth rates, we will still be 1.65 billion by 2059

As it settles down to govern, the new Government at the Centre needs to deal with the critical issue of population growth. Yet another indication of the pressing need for this is provided by the report titled, ‘World Population Prospects 2019: Highlights’, published by the United Nations Department of Economic and Social Affairs, which says that India’s population — now standing at 1.37 billion — will overtake China’s — now 1.43 billion — by 2027. Things are not going to stop there. According to the report, the country’s population is expected to rise by 273 million between 2019 and 2050. Subsequent increases are likely to take the total to the peak of 1.65 billion in 2059, following which there will be decline with the population stabilising around 1.5 billion by the end of the century, when it will continue to have the world’s largest population followed by China’s, projected at 1.1 billion.

Some people hold that an alarmist view of population rise is uncalled for. The annual population growth rate, which was 2.2 per cent in 1981, has declined significantly to 1.2 per cent in the 2010-2019 period. Besides, the consequences of increasing population are not entirely negative. Among other things, it means an increasing availability of labour force, the numerical decline of which now poses serious problems in several countries leading to the recruitment of foreign migrant labour and the consequent social and racial tensions. India, one can argue, is in a particularly advantageous situation in this context. According to the United Nations Population Fund’s (erstwhile United Nations Fund for Population Activities) report titled, ‘State of World Population, 2019’, two-thirds of India’s population is in the working age group of 15-64 years, which means that there will be no manpower shortage in the foreseeable future.

Such arguments, however, have to be taken with caution. While the rate of population growth may be declining, a population of 1.65 billion will make the task of the removal of poverty much more difficult besides posing serious problems in providing food, healthcare, transportation and ensuring waste management and access to sanitation. Employment will be a major issue considering that 12 million people are joining the country’s workforce every year.

It is not just a question of numbers but of uneven increase and density of population. Some parts of India are recording much higher rates of population growth than others. Unfortunately, these parts are also economically the least developed, with the result that increasing population will accelerate the rate of migration. Also, both inter-State and intra-State migration will continue to increase given the widening scope of employment in the service sector catering to the consumption needs of the growing middle class. The process will be compounded by global warming causing migration from coastal areas of the country, swallowed by advancing sea water and the huge tracts, stretching over States, which will become too hot for human life and work. Inherent in the entire process is the very real danger of the migrants being viewed as outsiders threatening the livelihoods and patterns of social relations of the locals. One has already witnessed this phenomenon in the form of attacks on taxi drivers from Bihar and Uttar Pradesh in parts of Maharashtra and, earlier, on South Indians.

As, if not more, serious will be the consequence of a migration-accelerated increase in the density of population, which, 345 per square kilometre in 2005, is set to rise to 504 per square kilometre in 2050, causing enormous problems of over-crowding and tensions. The problem is already acute given the nature of humans. According to Desmond Morris in his incisive work, The Human Zoo, the urban civilisation is only a few thousand years old, while humans have evolved as tribal hunters “not for a few centuries, but for a million hard years.” Speaking in evolutionary terms “this dramatic change [from a rural tribal way of living to an urban one] has been almost instantaneous…” Humans have “adopted brilliantly” to their extraordinary new condition,” but have not had time to change  biologically, to evolve into a new genetically civilised species.” Deep inside, they remain a tribal hunter.

There is insufficient space here to describe Morris’ detailed study of how humans have continued trying to adjust and the consequences thereof. Suffice it to say that critical problems remain and failure to find solutions may cause the extinction of humans as a species. I have dwelt on the matter because of its critical importance and the fact that the challenges facing humans will be all the greater given the simultaneous, massive increase in urbanisation. According to the Global Commission on the Economy and Climate’s New Climate Economy Report released in September 2014, India’s urban population, which increased from 217 million to 377 million over the last two decades, is expected to reach 600 million, or 40 per cent of the population by 2031.

In addition to the problems associated with a general increase in population mentioned above, such a massive rise in urban population would cause problems relating to urban traffic as well as waste management. Besides, there will be a pollution-caused decline in green cover following the felling of trees for constructing buildings and concentrated greenhouse gas emissions from surrounding industries and use of air conditioners. Of course, there will continue to be other, generally applicable causes like energy generation, vehicular emission of greenhouse gases and the burning of post-harvest plant stubble. There is hardly any need to dwell at length on the consequences of pollution. According to the New Climate Economy Report cited above, urban pollution caused 620,000 premature deaths in India in 2010, marking a six-fold increase from 2001. It cites “recent estimates” as showing that environment degradation caused by sprawling cities was reducing India’s GDP by 5.7 per cent or about $80 billion!

Furthermore, an article published in The Lancet, one of the oldest and most respected medical journals in the world, states that 1.24 million deaths in India in 2017 — 12.5 per cent of the total — were attributable to air pollution, including 0·67 million from pollution caused by ambient particulate matter and 0·48 million by household air. Of these deaths attributable to air pollution, 51·4 per cent were in people younger than 70 years.

The question, with apologies to TS Eliot, is: After such knowledge, what action? Not much has been done so far. India will be in serious trouble if the issue of population increase is not addressed far more seriously than hitherto.

(The author is Consulting Editor, The Pioneer)