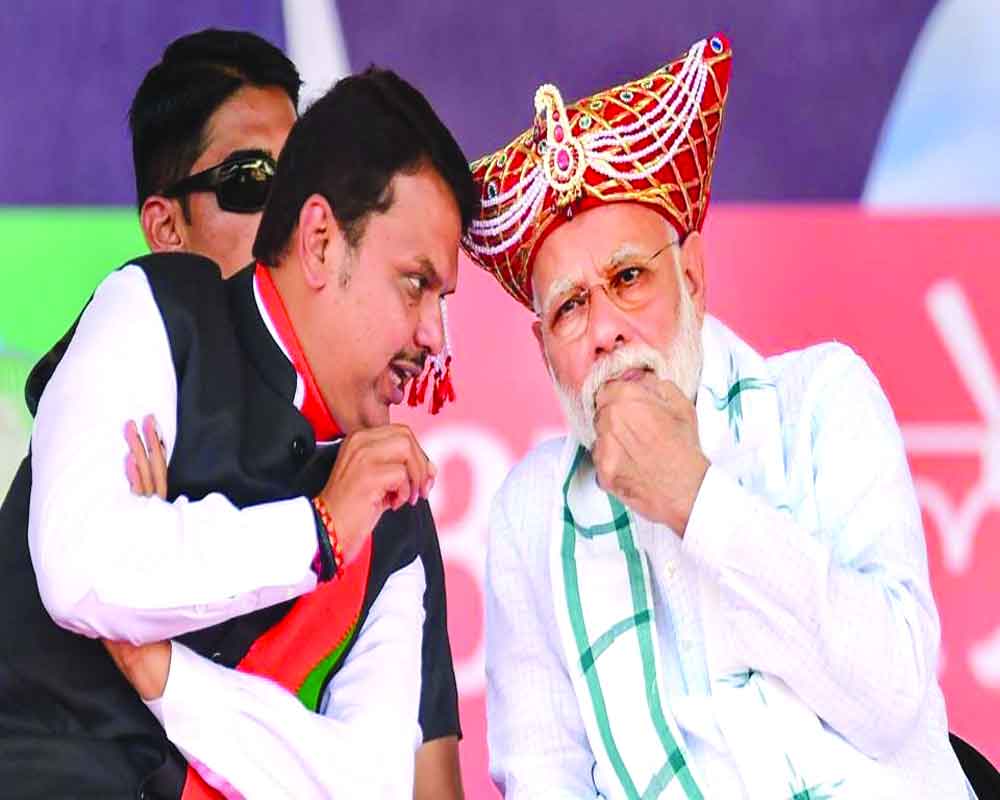 With the ruling BJP-Shiv Sena combine’s return to power in Maharashtra becoming more or less certain, the debate preceding the State Assembly polls scheduled for Monday has narrowed down to numbers. Notwithstanding the saffron alliance’s confidence of winning more than 220 out of total 288 seats, the numbers are quite not adding up if reports from the ground are anything to go by.

The BJP and the Shiv Sena, which had contested the 2014 Assembly polls separately, had together won 185 out of the total 288 seats, as against 83 seats bagged collectively by the Congress (42) and the NCP (41).

It is the rebel factor that is threatening to play a spoilsport for the ruling saffron alliance in the polls. Nearly 50 rebels, belonging to both the BJP and the Shiv Sena, are in the poll fray in as many constituencies across the State. Almost all the rebels are contesting the polls against the saffron alliance’s official nominees after having been denied tickets by their respective parties. At least 30 to 35 of the rebels have the potential to sabotage the chances of the official candidates of the two parties. The BJP is facing the brunt of rebels in the fray.

Sensing a certain victory, a large number of candidates had sought tickets from their respective parties, especially the BJP, even in seats that have gone to the other saffron party in the alliance.

Two days ahead of the withdrawal of nominations, Chief Minister Devendra Fadnavis had sent out stern message to rebels to opt out of the fray and said that there would be no place for rebels in the BJP-led “Maha-Yuti”.

On his part, Shiv Sena president Uddhav Thackeray - at his annual Dussehra rally held on October 8 -- subsequently apologised to those party workers who have been denied tickets, in an effort to defuse rebellion within the party ranks over the distribution of tickets. Both Fadnavis and Uddhav have not succeeded in reining in the rebels.

Together, the BJP and Shiv Sena established leads in 227 out of total 288 Assembly segments, in the 2019 Lok Sabha polls. It is the figure of the leads in the 227 Assembly segments that has prompted ruling saffron alliance leaders to claim that that the two saffron parties would win more than 220 seats in the Assembly polls.

Between April-May 2019 Lok Sabha polls and now, there has understandably been a sea change in the political scene in the State. The ruling saffron alliance is taking on a very weak Opposition, especially after the Congress and NCP have suffered a body blow in recent months - in the form of large-scale election-eve desertions from their ranks.

The desertions by 30-odd sitting MLAs and leaders in the last three months have not only eroded the traditional bases of the Congress and NCP, but they have made matters easy for the ruling BJP and Shiv Sena to prepare for the State Assembly polls.

Such is the level of the confidence in the ruling BJP circles that Prime Minister Narendra Modi, BJP president Amit Shah and Chief Minister Devendra Fadnavis have repeatedly gone to town, saying that the BJP-led saffron alliance’s victory in the State Assembly polls is a foregone conclusion. Modi and Shah have anointed Fadnavis as the next Chief Minister. On his part, Fadnavis has said that the saffron alliance would sweep the polls with an unprecedented majority.

Contrast the BJP-Shiv Sena alliance’s confidence with the already down-in-the-dumps mood prevailing in the Congress and NCP.

Hemmed in by the crisis triggered by the resignation of Rahul Gandhi as the party president and the delay in Sonia Gandhi taking over as his successor, the Congress does not look like a national party once it was. The recent resignations by party’s sitting MLAs and leaders have weakened the Congress’ organisational structure at the grassroots levels.

The Congress’ campaign has been listless from the beginning. That the Congress leadership has given up on Maharashtra well ahead of the polls could be evidenced from the fact that while Congress leader Rahul Gandhi addressed mere six public rallies, party president Sonia Gandhi and its leader Priyanka Gandhi Vadra stayed away from Maharashtra. Confined to their respective constituencies where they are contesting and the neighbouring areas, senior Congress leaders like Ashok Chavan and Prithviraj Chavan could not campaign much across the State.

The predicament that the NCP faced was of two folds. First, the switchover by a large number of its MLAs to either the BJP or the Shiv Sena has resulted in unprecedented erosion of its base in its stronghold of sugar cane-rich western Maharashtra. Secondly, the NCP has psychological jolt after its founder-president Sharad Pawar, former Deputy Chief Minister Ajit Pawar and several of its leaders across the State have been booked by the Enforcement Directorate for alleged irregularities and its senior leader Praful Patel’s name figured in a deal with the wife of Iqbal Mirchi, an aide of Karachi-based don Dawoon Ibrahim.

Sr Pawar was the lone full-fledged campaigner for the NCP. Pawar, who undertook two rounds of tours across the State, addressed a total of 65 rallies.

Chief Minister Devendra Fadnavis - who is leading the ruling BJP-Shiv Sena alliance into the Assembly polls - has been the only leader who has campaigned extensively across the State. As part of his 4,000 km-long campaign tour “Mahajanadesh Yatra” and also in the run-up days to the Assembly polls, Fadnaavis covered 220 constituencies across the State.

From the Shiv Sena side, both its president Uddhav and Yuv Sena leader Aditya Thackeray addressed 50 rallies each.

Local issues took a backseat in the campaign in the State. At their rallies, Prime Minister Modi and BJP president Shah by and large concentrated on the Centre’s recent decision to abrogate Article 370 in Jammu & Kashmir.

On his part, Chief Minister Fadnavis spoke on some local issues, including making Maharashtra a drought-free State by 2024, connecting rivers in coastal Konkan region with those in western Maharashtra, creating water grid in Marathwada region to address the drinking water problems, initiatives like loan waiver and crop insurances taken by the State Government to address farmers’ distress and the development push it has given in urban areas, including Mumbai, Nagpur, Thane and Pune, through various infra projects including the Metros and expressways.

Like in the Lok Sabha elections, the Opposition Congress leaders campaigned on issues like agrarian distress, continued farmers’ suicides, improper implementation of loan waiver scheme, ineffective handling of recent floods by the State Government, allegations of corruption faced by the Ministers in the Devendra Fadnavis Government, massive unemployment and economic recession in the country.