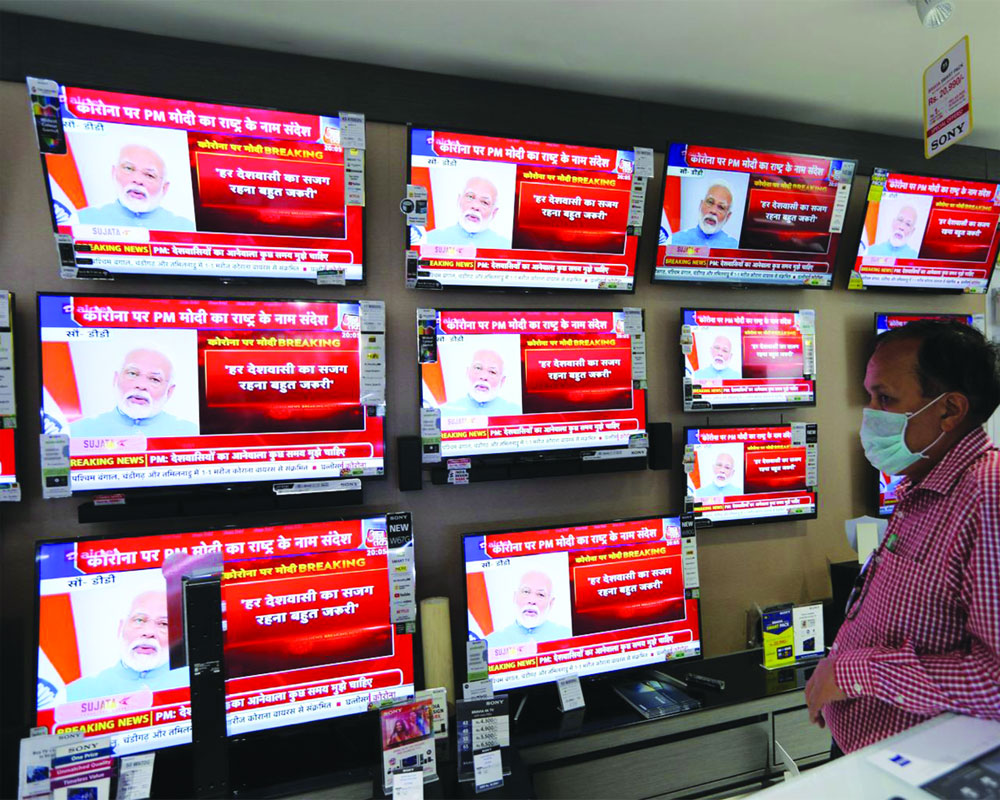 In times when the world is facing an existential crisis, the Western media must look closer home than build false narratives about India and its handling of the Corona pandemic

In an interview to German television Deutsche Welle (DW) on April 17, writer-activist Arundhati Roy accused the Government of India “of exploiting the Coronavirus outbreak to inflame tensions between the Hindus and the Muslims”, adding dramatically, “the situation is approaching genocidal.” Given their experience with a democratically-elected leader in 1933, one expected the Germans to show better sense in their reportage and choice of guests. Still, we remain grateful for the submarine ride that helped Netaji get to Japan.

Roy’s nauseating statements may please a certain audience but with no evidence to even tangentially support her wild allegations, DW has tarnished its journalistic standards by inviting her bilge against India at such a sensitive time. In reality, several South Asian nations hold the Tablighi Jamaat responsible for the rise of Coronavirus hotspots within their borders. Sensible Muslims are embarrassed by the Nizamuddin event, which led to the extension of the national lockdown; hopefully, it will end on May 3.

Recent weeks have also seen reports of a temple yatra and one high-profile wedding where none of the guests wore masks. In South Korea, a little known church emerged as a hotspot linked to nearly 5,200 confirmed cases in February. Singapore banned the local activities of this sect. Further, a high-profile election guru was recently smuggled from Delhi to an Opposition-ruled State in a transport plane. As he was visiting a State regarded as a Coronavirus hotspot, one expected the authorities to enforce the 14-day quarantine at the airport, on his return. Hopefully, he will not be allowed to smuggle himself back.

To return to the Tablighi Jamaat, around 250,000 people attended a five-day Ijtema in Raiwind, Lahore, Pakistan, on March 10. Authorities say over 2,258 people, who attended the event, were found positive for Coronavirus. On April 16, Maulana Suhaib Rumi, 69, head of the sect’s Faisalabad branch, who attended the Raiwind Ijtema, died of Coronavirus; five members of his family were also infected. Pakistan’s Science and Technology Minister Fawad Chaudhry held the “stubbornness of the clergy” responsible for the spread of the contagion. Pakistan’s first set of cases came with Shia pilgrims returning from Iran, one of the worst-affected nations, but the problem was then less known.

In Malaysia, nearly 16,000 Tablighis attended a meeting at Jamek Mosque, Sri Petaling, Kuala Lumpur (February 27-March 1) and spread the disease in Southeast Asia. Only half the Malaysian participants reported for testing, despite requests from the authorities. The guests included 1,500 foreigners from Brunei, Thailand, Canada, Nigeria, India, Cambodia, Vietnam, the Philippines, Indonesia, Australia, China and South Korea. The authorities in Brunei (50 cases), Singapore (5), Cambodia (13) and Thailand (2) have confirmed the link between the meeting and the disease. One Filipino man, who attended the event and was being probed for suspected Coronavirus infection, died in the city of Marawi.

The India-baiting New York Times published an article, In India, Coronavirus Fans Religious Hatred, on April 12 and said that the Delhi Government had banned meetings of more than 50 people on March 16, but on March 19, Maulana Saad Khandalvi, the head of the Tablighi Jamaat, announced that Coronavirus was “god’s punishment” and not to fear it. Days after the nationwide lockdown began on March 24, after two deaths at the Markaz, doctors found nearly 1,300 people at the centre without masks or protective gear. By then, hundreds had moved and spread the virus to many States, including the Andaman Islands. Quick action by the authorities intercepted the Malaysian guests at the airport before they could leave the country.

The Ijtema undeniably led to a spurt in India’s Coronavirus cases. Medical staff dealing with patients and quarantine cases also suffered very difficult situations, even as they risked their lives to save lives. In a related development, the Union Home Ministry has asked State Governments to help trace Rohingya migrants from different States, who attended the Ijtema in Delhi (March 25) as they might have contracted the Coronavirus. It appears that the incubation period of the virus varies and sometimes takes longer than the projected two weeks to manifest. The Delhi Police has reportedly charged Saad with culpable homicide, but he is untraceable. Worse, it appears that a meeting was also held in Mewat (Haryana).

For foreigners, to find a mote in the Indian eye and not look at the beam in their own,  has given pain to a nation that has always prided itself for adhering to the most exacting and challenging civilisational values. Bigotry does not come naturally to Indians; Western journalists should look closer home.

If I may show the mirror, George Packer writes, “When the virus came here, it found a country with serious underlying conditions and it exploited them ruthlessly. Chronic ills — a corrupt political class, a sclerotic bureaucracy, a heartless economy and a divided and distracted public — had gone untreated for years…. It took the scale and intimacy of a pandemic to expose their severity — to shock Americans with the recognition that we are in the high-risk category.” (We Are Living In A Failed State, The Atlantic, June 2020 issue)

The analysis of American preparedness to cope with the crisis is crisp: “When test kits, masks, gowns and ventilators were found to be in desperately short supply, Governors pleaded for them from the White House, which stalled, then called on private enterprise, which couldn’t deliver. States and cities were forced into bidding wars that left them prey to price gouging and corporate profiteering. Civilians took out their sewing machines to try to keep ill-equipped hospital workers healthy and their patients alive. Russia, Taiwan, and the United Nations sent humanitarian aid to the world’s richest power — a beggar nation in utter chaos.”

In India, First Lady Savita Kovind and thousands of women across the country are stitching masks to ensure that every citizen has at least one. In America: “A few Senators and corporate executives acted quickly — not to prevent the coming disaster but to profit from it.”

Above all, the virus, George Packer laments, exposed the inequality rampant in America: The wealthy and connected managed to get tested, though most had no symptoms, while “ordinary people with fevers and chills had to wait in long and possibly infectious lines, only to be turned away because they weren’t actually suffocating.” Unsurprisingly, most victims were poor, Black and Brown.