Crime against Canada’s sons of soil

Crime against Canada’s sons of soil 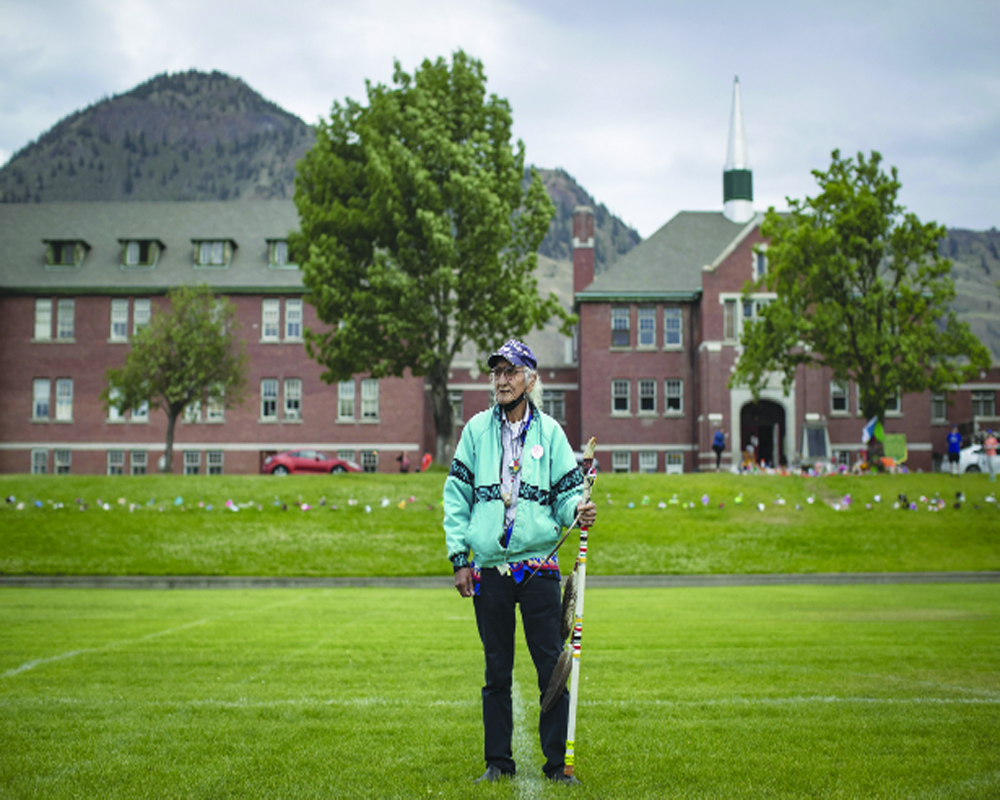 Best touted as the beacon of democracy, Canadian values are supposed to be emulated by the rest of the world. Its good governance practices and rich Human Development Index are categorised as a cornucopia of an ideal modern society. However, the way it is dealing with its persecuted indigenous people reflects the legacy of its dark colonial past. Behind its glittering facade of social justice and equality lies the legal discrimination and violence against the natives.

Racial discrimination and violence towards the indigenous people is not new to North America. The history, culture and society of countries in the region are replete with endless racial suffering of the aboriginals. With the passage of time, these ills of the colonial empire of Britain have taken roots in the social system in this part of the world.

The recent news of Kamloops Indian Residential School in the Canadian province of British Columbia, where the remains of 215 children were found in an unmarked grave brought to light the systematic torture and killing of indigenous people leading to cultural genocide. In fact, the Truth and Reconciliation Commission in Canada determined in 2015 that Canada committed “cultural genocide”. The state did it by forcing nearly 1,50,000 indigenous children to residential schools across the country. This happened between 1870s and 1990s. The purpose of this initiative was to simply assimilate the indigenous children into Canadian society as shaped by centuries of British colonial rules, mores and institutions, besides converting them to Christianity.

The National Enquiry into Missing and Murdered Indigenous Women and Girls in June 2019 found Canada guilty of both historic and ongoing genocide against indigenous people. The same enquiry also concluded that Canada specifically targeted women and girls. After testifying thousands of witnesses and experts, supported by its own rigorous research and legal analysis, it stated, “Canada has displayed a continuous policy with shifting expressed motives but an ultimately steady intention, to destroy indigenous peoples physically, biologically and as social units.”

This was more than sufficient to buttress the claim that aboriginal people in Canada are fighting for their survival against the onslaught of a state-run campaign directed towards their total extinction.

Searing stories of families whose children went missing and probably were killed indeed tell a horrific tale of Canada’s colonial past. Almost six years back in August 2015, the UN Human Right Committee (UNHRC) in its report flagged concerns about Canada’s human rights records. This should have been a wake-up call for the Canadian Government. The UNHRC regularly reviews whether states are living up to their obligations under the binding International Covenant on Civil and Political Rights. The report clearly indicated that Canada was failing indigenous people. Also, the UNHRC made more than a dozen recommendations for carrying out fundamental changes in Canadian law and policy in regard to the treatment of the First Nations, Inuit and Metis peoples.

Again, the violence and discrimination against aboriginal women was highlighted in its annual report to the UN General Assembly by the Committee on the Elimination of Racial Discrimination (CERD) in 2005.

There are three categories of indigenous people in Canada: Inuit, Metis and First Nations. The First Nations are the aboriginal peoples of Canada, occupying lands south of the Arctic.

Only by 1970s, the native Americans in Canada started using the term First Nations to refer to themselves to the world. Subsequently, the Government of Canada adopted the First Nations term, but sadly without offering it a legal recognition. Ironically, the Metis and Inuit people refused to call themselves First Nations.

Today, what prevails in public narrative is the term “aboriginal people” to collectively refer to all of First Nations, Inuit and Metis in Canada.

Article 1 of the UN Declaration on the Rights of Indigenous Peoples, passed on September 13, 2007, says indigenous people have the right to the full enjoyment as a collective or as individuals, of all human rights and fundamental freedoms, as recognised in the Charter of the United Nations, the Universal Declaration of Human Rights laws.

Despite efforts by the numerous indigenous groups and the Canadian Government, studies show that the statistical gap between incarcerated natives and the non-natives is yet to narrow down. The fact is that there is no magic solution for long-standing issues like crime and discrimination in Canadian society. What has been noticed over the years is that, there are massive gaps in education, employment and in social services.

It has been observed that even today many of the policies in regard to policing, prevention and corrections aimed at indigenous peoples are largely based on government models applicable to the non-natives. Hence, the long process of alienation and subjugation of the aboriginals persists.

Is it Canada’s democratic deficit? Is it blatantly violating the universally recognised basic human rights? It can rightly be termed as the generational effects of colonisation. Generations of poverty, abuse and cultural stigma have had a critical impact on the First Nations in Canada. By denying their due place and dignity in public space, the Canadian Government is simply violating the basics of universal human rights.

Justin Trudeau, the Prime Minister of Canada, seems appalled by what has happened to the indigenous people of the country. However, what many believe is that the reconciliation process is not only insufficient, but it is almost dead. The indigenous people have lost their faith in the Trudeau administration as the persecuted survivors of the Kamloops type schools for the First Nations are yet to get the damages and recognition of the level of torture they underwent. Though some of the steps taken by the current Liberal Government could be referred to as historic, they have all morphed into no action as of now.

The rant and rave of the indigenous peoples must reach the right forum. The old colonial tactics to exploit the sons of the soil can’t work if Canada wants to retain the global recognition as a liberal democratic society.

However, with Trudeau’s admission of genocide of the First Nations by the state, it is hoped that these persecuted voices will be heard. Bringing the perpetrators to justice remains a Herculean task for Tradeau. But if he, unlike past Governments, doesn’t crush the passionate movements of the indigenous peoples for justice, Trudeau’s name will be written in golden letters in Canada’s history.