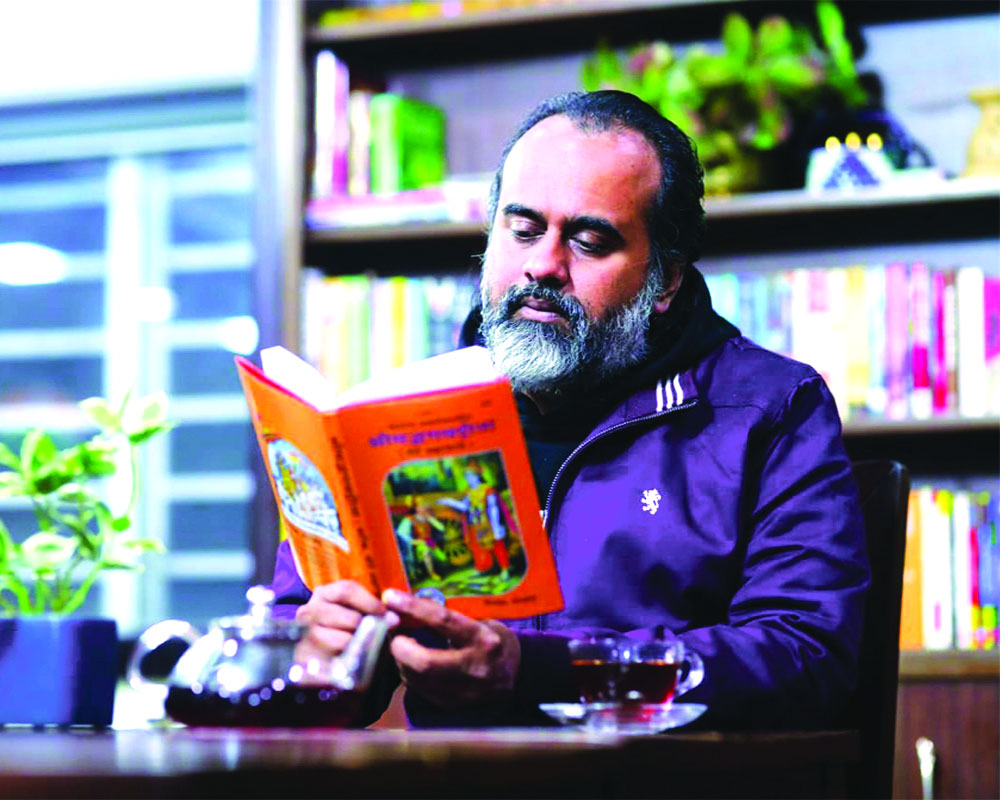 Acharya Prashant decentres action in the totality of karma, in a heart-to-heart with Khushbu Kirti

Prashant Tripathi, also popularly called Acharya Prashant, is an Advaita teacher and author. His recent book Karma: Why Everything You Know About It Is Wrong has hit the Amazon bestsellers’ list and there’s only infinite definitions of the concept of ‘karma’ that Acharya unveils. The IIT-IIM alumni teaches 17 forms of Gita and 60 forms of Upanishads. The intellectual and deeply philosophical leanings of the author have attracted a wide audience of readers.

Here are certain excerpts from the interview:

Your book Karma: Why Everything You Know About It Is Wrong is supposed to shatter the prejudiced notions of ‘karma’. Could you summarise your definition of the same?

This generation is still so much influenced by the ideals of Western philosophy, how do you propose to bring them back to the roots? And, is that your aim?

The bias is not towards the East or the West, but towards the Truth. In this context, I clearly see that Indian philosophy has a lot to offer. Whereas the Western view preoccupies itself with the world as an objective fact, the Indian approach is to explore into the consciousness that perceives the world. The Indian approach is, thus, inward looking and more intimate.

The concept of binaries, so prevalent in the West, stands opposite to the Eastern idea of ‘aham Brahamasmi’. Care to weigh in?

In the common normal world of the ego, binaries do exist. The first dualistic binary is me and the world - ‘I am not the world and the world is not me’, and that becomes a binary.

‘I feel the world exists and I feel I exist.’ In general, my notion of myself, as well as my notion of the world both are false. I am conditioned and the world that I perceive is, therefore, an illusion. Just as a person, with misty and cloudy eyes, perceives nothing but illusions.

Now it is the Truth within shining as the Truth outside. Only now, can one say ‘aham Brahamasmi’. So, the notion is not something that is rightfully available to the common ego state to utter. In the common state, aham is just aham, not Brahma; and when aham is just aham, obviously aham and sansaar are two ends of duality, together but never in union.

A deeply spiritual person alone has the right to say, ‘aham Brahamasmi’.

As an Advait philosopher/practitioner, you are known to propagate the teachings of Upanishads and the Gita, what challenges have you faced in teaching the modern audience?

Popular modernity is a lot about belief in the self and a blanket repudiation of the past. Together these two form a lethal, self-destructive combination. Firstly, the belief in the self as a genuine, original or authentic entity is misplaced; secondly, a lot that can dispel that belief is stationed in the past. So, when you have a strong, even if false, belief coupled with an aversion to that which can probe and dispel this belief, then you are in a situation that is not only false but also designed to keep the false secure, and that is the challenge that I face with the so-called modern mind and that is the problem that modern mind faces with itself. One of the problems with popular misinterpretations of modernity is that they accord the self and its desires a very high, actually the highest value, without ever bothering to enquire where the self comes from and whether it deserves such a high value. So, the ego’s nature is such that it is extremely self-protective and the notion that convinces it of its infallibility becomes very valuable and indispensable to itself. So when it is faced with the oriental scriptures whose central idea is the falseness of the ego self, the first reaction of the ego is to resist them, find faults with them and declare them outdated.

Who are the seminal philosophers you follow and why?

Philosophy is authentic only when it makes one come to the self. Therefore, philosophy has to be spirituality; and philosophy has to be a way of life, not merely a structure of thought. The philosophers who appeal to me would include the Rishis of the Upanishads, Sage Ashatavkra, Adi Shankaracharya, Plato, Socrates, Gautama Buddha, Kabir Saheb, Krishna, Lao Tzu, and Nagarjuna from the Buddhist tradition.