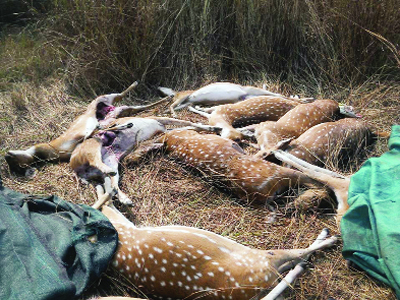 At least 22 spotted deer were found dead under mysterious circumstances in Kanan Pendari zoo at Sakari in Bilaspur district of Chhattisgarh on Wednesday, zoo officials informed The Pioneer. Although, the exact cause of death is yet to be confirmed, it was suspected that the deer died of poisoning.

Divisional forest officer (DFO) Hemant Pandey said the exact cause of the death would be known only after autopsy, but the sudden demise of such a large number of deer at the zoo, which is left with just 31 deer now, sent shock waves through forest department officials who were unable to say anything specific on the matter.

Pandey said the incident came to light when a member of the zoo staff went to the open enclosure of the spotted deer to feed them on Wednesday morning. The deer had been fed last on Tuesday morning and visitors were allowed till 8 pm on Tuesday.

Some zoo officials said the authorities had planned to relocate some of the deer to other zoo. Usually the animals are administered drugs like diazepam ahead of shifting to lessen transit discomfort. Some people suspect the deer were given an overdose. An eyewitness said that bloods were oozing out of the deer’s mouths.

Forest officials, however, denied the charge and said there was no plan to shift the deer. Ruling out the possibility of miscreants’ hands behind the incident, the DFO said that a three-member team, including senior wildlife experts and forensic experts, had reached the spot from Durg Veterinary College to investigate the cause of the deaths.

However, the DFO said that samples of cattle feed given to the animals last evening have been collected so that chemical tests could be conducted to investigate further. Few years ago, some deer died in the same zoo due to administration of drug overdose ahead of shifting.