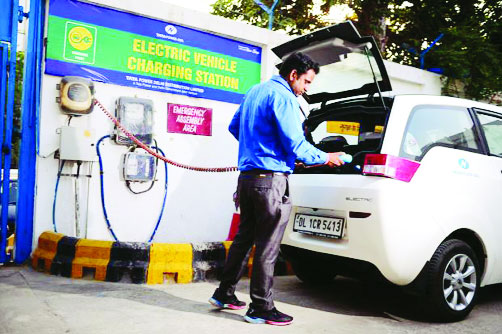 Electric mobility offers a promising long-term solution to reduce dependence on fossil fuel. But clarity of thought must take primacy in policy-making over hype and emotions

India, for the first time, organised the Global Mobility Summit on September 6, 2018. Needless to say, it was a mega show, very well attended by global CEOs which adequately demonstrated the importance of Indian market in the contemporary auto world. Kudos to the event management skill of the NITI Aayog. Indeed, magnificent but what perplexed most analysts assessing the outcome of this impressive show was that there was no policy declaration, leave alone lack of any firm commitment from Original Equipment Manufacturers (OEMs) to invest in India.

Even the much awaited FAME-II declaration was missing. Instead, debate was dominated by the only concern about subsidies for electric vehicles which presumably can result in import substitution of crude oil; albeit with import of expensive electric vehicle (EV) parts like lithium ion batteries, motors and electronics for the singular objective of reducing pollution. This is really surprising as these imported parts constitute more than 65-70 per cent of the value of an electric vehicle and in 2017, the import of electronic parts alone was around $47 billion, third highest after oil and gems. The Indian auto industry is competitive in traditional engine and transmission parts that constitute approximately 40 per cent of its turnover.

In 2017-18, India exported auto components worth `90,571 crore while imports that included 27 per cent from China stood at `106,672 crore. Hence, there is a justified worry that policy push for electric vehicles without addressing the issue of existing auto component industry and the local manufacturing of EV parts may only end up increasing the net import bill, worsening the current account deficit situation in the short to medium term.

However, shift to electric vehicles is a promising long-term solution to reduce  dependence of the transport sector in India on fossil fuel. And without initial Government support, there will not be enough demand to justify any investments for manufacturing of EV parts in India. Hence, this seems to be a classic chicken and egg story. It is essential for our policy makers to find a viable approach to overcome this dilemma.

The import implications of advance batteries for EVs is even more serious than electronic parts import as batteries constitute almost 55-60 per cent of the total value of an electric vehicle. Hence, it is obvious that we need to try quickly to facilitate the manufacturing of advance batteries in India. For this, aggregation of demand from other applications such as renewable energy storage, energy back up for telecom towers, defence requirements, and home applications, among others, are needed where Government incentives can help. However, this in itself will not be enough given the fact that China, which has the globally largest and fully integrated battery manufacturing industry, will attain 73 per cent of the global market share by 2021. Hence, at the global stage, access to latest battery and process technology and secured raw materials supply are essential for these investments to be viable. Moreover, even if we start today, it will take at least three to four years for these plants to go on line. So, can India afford to carry on with a business-as-usual approach in the intervening period? The answer is clearly no.

Some analysts propose that a cess be levied on all fossil fuels vehicles which can be used to incentivise electric vehicles, thereby resulting in demand generation which will in turn lead to efficient manufacturing eco-system created in the country. To my mind, this is myopic, over simplistic approach and clearly fails to address many fundamental questions.

For instance, what are the costs and benefits of such an approach? Is this the optimal pathway for creating viable demand for EV parts manufacturing? Does it not mean taxing the Indian industry to create demand for imports from China? Does this approach support other technology options that substantively help in fossil fuel substitution as well as higher fuel efficiency?  It must be clearly understood that through electric mobility what we are fundamentally attempting to do is to reduce fossil fuel consumption and, hence, reduce pollution too. Therefore, the answer to these questions warrants that in addition to securing sizable battery manufacturing in the country, a two-pronged approach is needed.

First, all technologies that either help substitute liquid fossil fuel consumption like bio-fuels, CNG, LNG etc or technologies that give fairly high fuel efficiencies like hybrid electric vehicles, need to be encouraged by a transparent policy framework. Taxation policy (GST) based on oil consumed by the vehicle ie carbon taxation is one such powerful transparent policy tool that will encourage auto companies to adopt such technologies very quickly. This has already been adopted by many other countries, including Thailand.

Second, full range of electric vehicle technologies, including electric hybrid technologies, should be supported in the transition phase since they use the same parts (batteries, motors, and electronics) and, thus, can help in creating demand for EV parts, thereby leading to faster localisation. By being technology agnostic we can rapidly replace millions of petrol/diesel vehicles by these technologies so that the vehicles of today  are cleaner and consume lesser fuel for the next 15 odd years as they ply on Indian roads before being replaced by electric vehicles. Hence, clarity of thought with ‘India first’ approach based on pragmatism must take primacy in policy making over hype and emotional pitch.