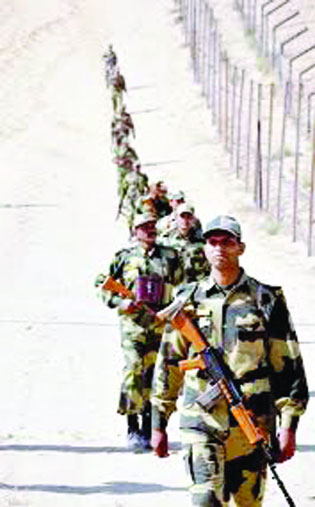 The unquestioned call of duty entrenched in a soldier is respected by this Government. Putting soldiers’ welfare at the forefront is a matter of policy now and not a mere slogan

On the second anniversary of surgical strikes conducted by the Indian Army that dealt with terrorism on Indian soil with an iron hand, ‘ParakramParv’, an exhibition to showcase the contribution in Indian Army in nation-building, is being observed all across the country. The manner in which India answered its enemy with an attack, laced with strategic precision and political will, took the world by surprise.

Ever since the Narendra Modi Government came to power, there has been minimal political constrains on the Indian forces dealing with conflict situations. This has instilled a great deal of confidence not only in the top leadership of the Armed Forces, in formulating retaliatory measures against enemy designs, but also in the soldier who protects the borders while putting his life on the line. In the aftermath of the Uri attack, the Army acted with precision to take down terror targets on the other side of the border with full backing of the Government. It demonstrated exemplary military prowess of the Indian forces when provided with a bold political leadership that reposes full faith in their capabilities.

The Prime Minister has, time and again, articulated his unflinching support to the Indian forces through his actions that speak volumes about his intent. Take for instance, One Rank One Pension (OROP), a long-standing demand of the Army personnel, that saw little traction in the Government ranks since the past 43 years. The previous UPA Government came up with a frivolous amount of Rs 500 crore to be set aside for the implementation of OROP.

Prime Minister Modi embraced the onerous task of ensuring justice to the Army servicemen and delivered on his promise with utmost urgency. After conducting a thorough budgeting exercise, the Modi Government allocated one lakh crore rupees in the Budget 2016-17 towards payment of defence pensions. The resolve with which the Government acted showed that the dispensation at the Centre is sensitive to the struggles of the Army personnel and their families. It was an expression of Indian citizens’ reverence and gratitude for the Armed Forces, and a sincere acknowledgment of their sacrifices.

In Kashmir, which is deliberately being kept on boil by anti-India outfits, the Army has been given enough room to take decisions depending upon the war-like situation at hand. This has come as a great relief to the soldier who is faced with terrorists firing bullets or with volatile crowd pelting stones at him. However, victories are as much about keeping morale of the soldiers high as it is about ammunition and strategy. Given India’s tricky neighbourhood and myriad external threats, the Indian Army faces ‘war-like’ conditions ever so often.

India’s rise as a flourishing economic power is a well-stated fact now. In the last four years, there has been a significant shift in global perception in view of stabilising economic parameters and an inviting atmosphere for businesses and capital to park. However, India’s military power had been reeling from lack of modernisation.

Considering the onerous task of defence procurement, the Modi Government formulated the Defence Procurement Procedure (DPP) 2016, that focused on “institutionalising, streamlining and simplifying defence procurement procedure to give a boost to ‘Make in India’ initiative of the Government, by promoting indigenous design, development and manufacturing of defence equipment, platforms, systems and sub-systems.” The new policy gives weightage to Indian defence manufacturers with a view to promote innovation and self-reliance. The Government has taken several steps to implement the policy on the ground:

i) In a recent move (June 2018), the Defence Acquisition Council approved procurement of equipment and armaments for the Defence Forces, including Rs 9,100 crore worth Aakash missile systems.

ii) India signed 182 defence contracts in the last three years, including the current year, displaying urgency in its actions.

iv) A $100 million contract for the purchase of 1.58 lakh bullet-proof helmets has been done with an Indian facility in Kanpur.

vi) Expenditure on purchase of defence equipment from Indian vendors for the three services during the last three years is steadily increasing.

Under Prime Minister Narendra Modi, modernisation of the Armed Forces has been fast-tracked and critical defence deficiencies in weapons and infrastructure are being met through fast processing of defence procurement agreements while creating a robust climate for defence set up under the ‘Make in India’ initiatives.

The unquestioned call of duty entrenched in a soldier’s psyche reflects a relationship of trust between him and his Government — that no matter what, he has thebacking of his people. With the advent of the Narendra Modi Government, issues faced by the Army have become a major focus area. Putting soldiers’ welfare at the forefront is now a matter of policy and not a mere slogan.

(The writer, a BJP MLA, is leader of Opposition in Delhi Assembly)