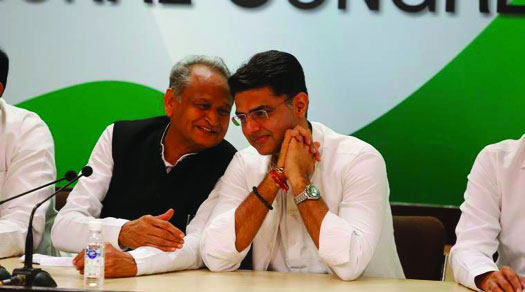 Congress can smell a win in the State Assembly poll. So, it’s balancing internal power structures to avert a last-minute mishap

Rajasthan Chief Minister Vasundhara Raje, as her political opponent and Congress State unit chief Sachin Pilot put it on a television show a couple of days ago, is the only BJP leader who has managed to get the better of her national party president. His reference, of course, was to the open secret that Amit Shah and the BJP top brass were contemplating a change of leadership in the State earlier this year given the pretty strong anti-incumbency mood there but Vasundhara Raje was having none of it and she eventually prevailed. That, however, may be the last major political victory for her this year. For, the ground reports are getting quite unambiguous — the Congress looks like it’s on the comeback trail in Rajasthan, helped in no small measure by a coherent poll campaign, led by former Chief Minister Ashok Gehlot and Pilot with former Union minister CP Joshi too given due respect, which seems to have succeeded in leveraging the anti-incumbency sentiment against the BJP Government. Sensing the wind, BJP leaders including a couple of sitting legislators have joined the Congress which has also got its caste/community social coalition right this time around with only the Rajput community and the urban middle-class and trading communities seemingly not wildly keen on it though here too the Vasundhara administration does draw some flak.

The Congress has got wide acceptance in the OBC, Gujjar and Brahmin communities (projecting Gehlot, Pilot, Joshi would have helped) and has made sizeable gains among the Jats after their agitation against the State Government demanding reservations. The Meena community is being assiduously wooed by the Congress and the minority vote seems headed their way too. But the Congress has become adept at snatching defeat from the jaws of victory in recent years, not least because of internal dissensions and sabotage. To prevent precisely such a situation from coming to pass, the leadership has adopted the ploy of announcing, in advance of the issuance of its official list of candidates, that both Gehlot and Pilot will be contesting the Assembly poll. There is no word yet on CP Joshi, another contender for the chief ministerial chair, most likely as a compromise candidate if the two dominant factions led by the former Chief Minister and the PCC president get recalcitrant in the event of a Congress win at the hustings. While the party has been careful not to let this decision appear as counting their chickens before the eggs have hatched, it does show that the leadership is not fooled by the surface bonhomie on display. It augurs well for the party that it is getting hard-nosed about its internal power dynamics. Now, for the little task of actually winning the election!