The problem with joblessness

The problem with joblessness 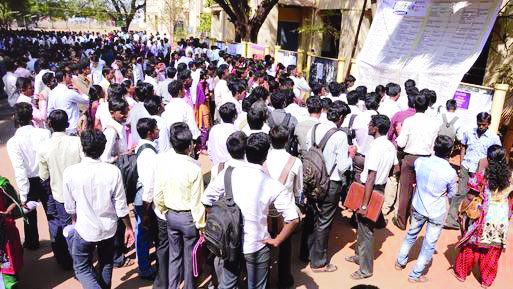 Unemployment rate among graduates is increasing. This is a disturbing development for a country having the world’s largest young population and needs urgent attention

India has the world’s largest people in the age group of 15 to 29, referred to as the ‘youth’. As per 2011 census, youth of our country comprises around 28 per cent of the total population, and contributes about 34 per cent towards India’s national income. The country is going through a phase of transition due to which, the share of youth in the total population is increasing with an average age of around 29 years.

This ‘demographic dividend’ comes at a time when the rest of the world is ageing with average age of 29 years in the US; 46 years in Europe; and 47 years in Japan. It is often argued that if the ‘youth’ is properly skilled and absorbed in the labour market, it can contribute to higher economic growth. Hence, one of the most important concerns for our policy-makers and Governments is the expansion of quality education and employment opportunities at an adequate pace to reap the benefits of demographic dividend.

However, rising unemployment rate and other reasons for seething unrest among the youth in recent years has become a hot topic for discussions and debates. Because a large section of this segment comprises first-time voters, their anger will be big factors in the coming State and Assembly elections.

The Indian economy is now on the path of recovery and is placed among the six largest economies in the world. Several schemes of the Union Government for the promotion of youth employment, such as Skill India, Startup India, Pradhan Mantri Mudra Yojana and other self-employment initiatives, are in the right direction.

On the contrary, a few recent reports suggest a disturbing trend of rising unemployment rate in our country. As per  a report by the International Labour Organization (ILO), as many as 18.3 million Indians were unemployed last year and this is expected to rise to 19 million by 2019. Data by the Centre for Monitoring Indian Economy for August  2017, revealed that India’s unemployment rate stood highest at 6.2 per cent in the last two years. On the one hand, joblessness among the youth is visible in the form of increasing participation in agitation, violence and other illegal activities across the country, on the other, a large number of youth applied for a few Government jobs in the last few years. Over 2.8 crore applicants applied for 90,000 jobs offered by the Indian Railways; two lakh applicants applied for 1,137 police constable jobs in Mumbai; 12,500 applicants applied for a peon job in Rajasthan Assembly, 25 lakh appeared for 6,000 group ‘D’ jobs in West Bengal. Many more cases like these can be traced.

The above figures point to the present unemployment situation among youth in the country. A large number of applicants for these low paid formal jobs were technical and professional graduates reveal high unemployment rate among educated youth.

Similarly, the annual labour bureau survey conducted in 2016 showed that one out of every sixth (16 per cent) youth, and one out of every third (35 per cent) graduate youth was unemployed. In particular, the unemployment rate among graduate women (47.8 per cent) was significantly higher than their male (29.7 per cent) counterparts, which is more evident in urban areas.

Further, unemployment among youth graduates across major State was highest in Himanchal Pradesh (57.1 per cent), Jharkhand (48.6 per cent) and Uttar Pradesh (47.7 per cent), while lowest in Gujarat (8.2 per cent), Delhi (11.7), and Karnataka (13.7 per cent). This reflects that unemployment rate among graduates is more prominent in northern and eastern backward States, while less visible in highly industrialised and urbanised region of the country. The credit for high and low youth unemployment rate should be shared by the policies of respective State Governments’ than the Centre.

These facts clearly show regional inequality in the creation of enough jobs for the educated youth. To accelerate the process of job creation, different Ministries at the Centre as also the State Governments need to include job creation in all their programmes and policies.

Employment creation must be an integral part of their macro and other economic policies. The northern and eastern parts of the country have not been able to experience growth and employment creation as in western and southern parts. Such regional inequality needs to be corrected so that local youth are able to get employment in the regions itself.

If appropriate steps are not taken in the near future, the growing educated unemployed youth will become a curse for the country. Due to absence of job, they may get engaged in theft, violence and other illegal activities.

(The writer is Fellow, Institute for Human Development, New Delhi)