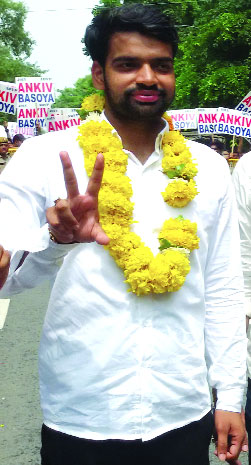 Delhi University Students’ Union (DUSU) president Ankiv Baisoya on Thursday tendered his resignation from the post on the advice of the Akhil Bharatiya Vidyarthi Parishad (ABVP), which suspended him from the organisation over his fake degree controversy.

The ABVP has suspended Baisoya from the organisation till enquiry in the “fake degree case” is complete. The rival National Students’ Union of India has criticised the ABVP claiming that the decision was taken under pressure ahead of the High Court hearing.

After Baisoya’s election as the DUSU president, the Opposition party claimed that he submitted a fake bachelor’s degree to fight elections.

“The moment ABVP won DUSU elections by 3:1, NSUI and other student organisations started raising questions on the authenticity of Baisoya’s previous degree and his admission to the DU. Keeping in mind students’ struggle, emotions and expectations and in order to maintain the genuineness, the ABVP asked Baisoya to resign from his post and also removed him from all the responsibilities of the organisation till DU completes its verification process,” said ABVP spokesperson Monika Chaudhary.

The High Court is hearing the case on a plea of NSUI student leader Sunny Chillar, who has sought from the court that Baisoya’s election be set aside after news reports said the registrar of Thiruvalluvar University had “unambiguously and unequivocally” declared Baisoya’s certificate “fake and forged”.

Chillar has also alleged that DU was “deliberately delaying” the verification process as no fresh polls would be held for DUSU presidency in case Baisoya’s election is set aside over the fake degree issue after expiry of the two-month period.

However, the Opposition party AISA and NSUI claimed that the ABVP and the varsity are playing ‘game’ with the students as the time limit for the re-election has been crossed.

“ABVP made Baisoya resign after the 60-day time period for re-election is over. After Baisoya’s resignation, the ABVP will still retain the presidential post as Shakti Singh, current DUSU vice-president, will take over,” said AISA Secreatry Madhurima Kundu.

On the other hand, the NSUI Delhi State president Akhay Lakra said, “This is clearly a decision under pressure by the ABVP and in light of the upcoming HC order on October 20, when it is near certain that Baisoya would have been disqualified anyway. However, it is an attempt of ABVP to retain the DUSU presidentship as the time period for the re-election has crossed. NSUI demands fresh elections. If DU administration continues to show itself to be servile to the interests of the ABVP, we will pursue this matter in court.”

According to Lyngdoh Committee guidelines on university elections, if a post fell vacant within two months of declaration of results, fresh polls would be held, his plea has said.