WII study to find if killer virus can cripple tigers

WII study to find if killer virus can cripple tigers 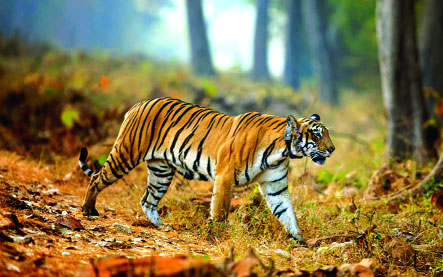 The National Tiger Conservation Authority (NTCA) will soon commission a Wildlife Institute of India (WII) study to assess if the canine distemper virus (CDV) — the deadly pathogen that recently killed over 5 lions in Gir forests — can affect the health of the tigers too.

Sources said the decision to conduct the study was discussed at a NTCA technical committee meeting last month. Incidentally, the WII proposal had been gathering dust for the last several years with the two departments of the Dehradun-based Government’s premier wildlife research body in tug-of-war to conduct the study.

“However, now all the issues have been sorted out and the WII experts will soon start the study in a few tiger reserves which will soon be identified. CDV is a highly contagious disease and we should not be seen caught unprepared in the matter,” the sources quoting officials said. He was referring to the death of 23 lions in Gujarat’s Gir sanctuary in less than a month, most of them due to CDV and protozoa infections.

The lions, an endangered species, are now being vaccinated with shots of the vaccine against the virus which have been imported from the US.

CDV is considered a dangerous virus and had been blamed for wiping out 30 per cent population of African lions in East African forests. CDV is mainly found in wild dogs, jackals and wolves. It attacks the immune system and other vital organs in animals. In most of the cases, the infection is fatal.

Sources in the NTCA said the study is being conducted with an aim to assess and suggest preventive measures to tackle the virus if it is found to be lurking around. There are just over 2,500 tigers left in the wild, with majority of them in India. Threat from poaching and shrinking habitat has always been a major concern to survival of these highly endangered striped cats.

Following a report in Veterinary Science’ which cited how a dead Asiatic lion from Gujarat was detected with a lethal virus in its tissues after the animal came in contact with other infected animals like cattle, buffaloes or dogs, the NTCA had issued an advisory to the tiger reserves to vaccinate stray cattle and dogs living around reserves on a regular basis.

Though, in India there has been no report of tiger death due to the CTV virus, global studies have pointed out that it can wipe out the striped cats.

According to a 2014 study from the Wildlife Conservation Society (WCS), CDV has the potential to be a significant driver in pushing the tigers towards extinction. The authors evaluated these impacts on the Amur tiger population in Russia’s Sikhote-Alin Biosphere Zapovednik (SABZ), where tiger numbers declined from 38 individuals to 9 in the years 2007 to 2012. In 2009 and 2010, six adult tigers died or disappeared from the reserve, and CDV was confirmed in two dead tigers leading scientists to believe that CDV likely played a role in the overall decline of the population.

Joint investigations of CDV have been an ongoing focus of scientists since its first appearance in tigers in 2003. The finding shows that smaller populations of tigers were more vulnerable to extinction by CDV. Populations consisting of 25 individuals were 1.65 times more likely to decline in the next 50 years when CDV was present, as per the WCS study.