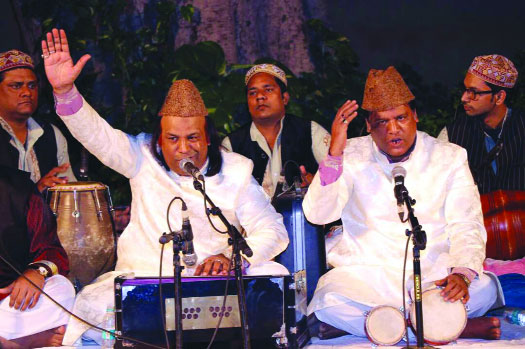 The Qutbi Brothers Qawwals are revered as one of India’s most celebrated qawwali singers. They come from an 750-year-old school of Indian musical.

“This is an old tradition and qawwals don’t know the status of it. It comes third in the musical heritage of the country. First is Shastriya sangeet then Bhakti sangeet and then Sufiyana qawwali. Sufi is a tool for the soul to meet god,” said Idris Qutbi.

He laments that traditional qawwali is not shown on screen. In films, it is only for entertainment. In very few portrayals, like Khawaja mere Khwaja, the portrayal is real. He blames this on lack of good qawwali artists. “To become a qawwal you spend close to a decade serving your mentor. After 12 years, they would start the actual lesson. They tested how much ability you had to learn the craft,” he said.

To become a good qawwal in these times, one has to find a good mentor, serve them and learn from them. “They should carry the ishq inside them to their teachers,” he said.

The record-breaking singer, who sang 12 hours non-stop at an event organised by the Sangeet Natak Akademi to promote the Qawwali tradition, in November 2016, will soon begin his institute for Sufiyana qawwali since he says that there is a lacuna in this space. “There are academies for Kathak, Classical, and more performing arts but not to teach qawwali in India whereas people as far as Europe, South Africa, UK and Bangladesh are learning,” he said.

In their career spanning across several decades, they have enraptured audiences all over the world in several prestigious music festivals. However, he laments that there have been no qawwal who won the Padmashri. “Musicians, ghazal singers were awarded but not qawwals. The last qawwal to be awarded was back in 1970s and there have been no others since,” he added.

The singer has taught his two sons, Arshad and Adnan, to continue the tradition and wants to take it to more people. “They have also been educated in Indian classical,” he said.

We are trying to keep the traditional alive. The origin of qawwali was in India. Khwaja Mouinuddin Chrishti laid the foundation in India followed by Ahmed Khwaja Quttubuddin Bakhtiar Kaki, who laid down his life as a devotee of the tradition. And the Qutbi brothers derive their name from the latter. The tradition came from Ajmer to Baba Farid and then was taken forward by  Nizammudin Aulia Amir Khusrau.

They performed yesterday at an event by the Salaam Baalak Trust. The Qawwali evening with Qutbi Brothers was organised to raise funds for underprivileged children.

“The fund raiser helps us to connect with our donors as well as raise funds for the program”, says Tanya Alag, head, resource mobilisation.