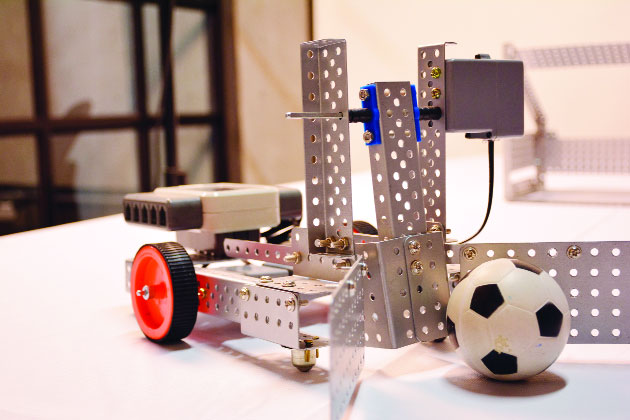 Robotics is growing and offering lucrative options. Tarun Bhalla tells you how

The field of robotics is rife with opportunity as it makes headway right into the heart of India. Slowly but surely, it’s gaining traction as robotics becomes an integral part of our lives. Look around and you’ll realise that robots are making human lives easier and much simpler. From restaurants to operation theatres, from nursing homes to classrooms, to our homes; robots are slowly but surely transforming our way of life.

How the face of robotics will change in the next five years?

Robotics is a trendsetting industry with constant advancements being made year on year. New and improved techniques are being invented, assimilated and applied as we speak with a view to revolutionise the way we live, work or entertain ourselves. Recently, a cafe in Tokyo launched service rendered by robot waiters. The four feet tall Minato Ward robots are being remotely controlled by people with physical disabilities such as amyotrophic lateral sclerosis (ALS — a form of motor neuron disease), enabling them to perform a job they wouldn’t be able to otherwise. Robots are proving to be a gamechanger in a number of fields — be it at home, public security, education, surveillance, defense or entertainment.

Think of robots cooking complex meals on demand. Too outlandish? Well, you’d be surprised to know that Spyce, a restaurant based in Boston, Massachusetts is a robotic-powered restaurant which prepares meals in under three minutes. Some restaurants are using self-ordering tablets for taking customer orders. Hospitals are increasingly making use of surgical robots to perform surgeries with precision, smaller incisions, decreased blood loss, less pain, and quicker healing time for patients. And you may not even realise but a majority of us are using robots at our homes too.

In case you fear that more robots mean fewer jobs for humans, think again. In fact, in a recent study conducted by Indeed (an Indian job portal) revealed a hike of 186 per cent amongst job seekers looking for opportunities in the robotics sector in India between May 2015 and May 2018. And during the same period of time, job postings in the sector saw a growth of 191 per cent.

Robotics is a fast-growing sector in India with sectors such as manufacturing, healthcare and construction leading the demand for robotics talent. And there’s a huge scope for its application in other sectors too as access to Internet connectivity and open source applications become more widespread in the country which will prove conducive to the sector’s growth. Even though people have a fear of automation taking away jobs from us humans, in fact, more job opportunities are being created for skilled personnel. Maharashtra is creating the most robotic jobs in India followed closely by Karnataka and Telangana.

So, all you parents out there can take heart from the fact that this is a viable industry which is going from strength to strength. And this is the opportune time to get your kids involved in robotics. Inculcate a love for making in them as that will help them explore and search within themselves whether they’re truly passionate about robotics or not. When children get introduced to robotics at an early age, they can develop and hone skills like creative thinking, collaboration, programming and coding and have good ol' fun while doing it.

Avishkaar is one such entity which is working towards this vision with a fervour. With an emphasis on promoting the culture of making amongst children and adults alike, through its range of DIY robotics kits.

To sum up, robotics has a bright future ahead in India with career opportunities in diverse fields like aerospace, defense, manufacturing, healthcare and medical research, entertainment, construction and more. As they say, the proof is in the pudding, and boy this pudding is definitely worth a try.

The writer is Founder-CEO, Avishkaar