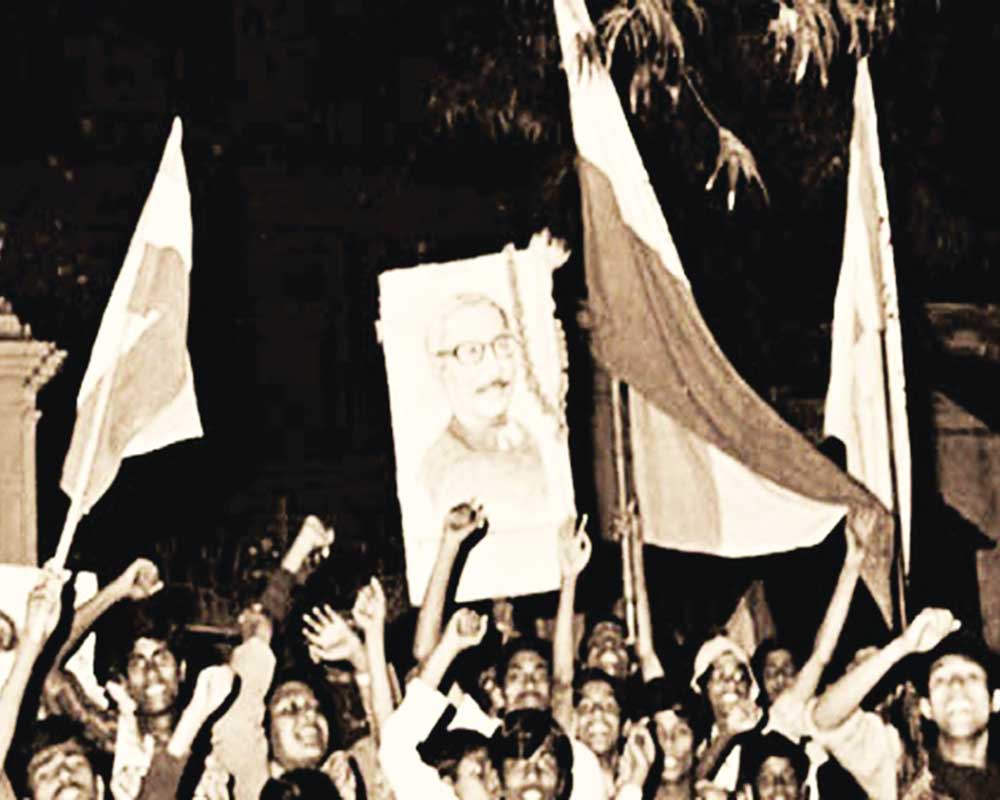 The atrocities against humanity during the Bangladesh Liberation War were such that no country could forget them. Dhaka, too, is making efforts to keep the memories alive

December 3, 1971, saw the beginning of the third India-Pakistan war with Pakistani aircraft treacherously attacking India’s military bases in the country’s north-western parts. The war, which ended in Pakistan’s ignominious defeat, also led to the culmination of Bangladesh’s (then East Pakistan’s) liberation struggle in the form of its complete independence and emergence as a sovereign State. Further, it paved the way for the revelation of the full, chilling dimensions of the genocide and mass rape perpetrated by the Pakistani Army and its Bangladeshi collaborators from the night of March 25, 1971, when Islamabad’s military launched its savage crackdown, to December 16, 1971, when Bangladesh emerged into freedom.

Reports from across the border had already conveyed some idea of the horrendous atrocities unleashed by the Pakistani Army and its collaborators. Now the complete picture began emerging. The cold figures — three million people slaughtered, perhaps as many as over 500,000 women raped (against the initial official figure of 200,000), more than 10 million fleeing to India as refugees and 30 million internally displaced — are horrifying. No country can forget such massive trauma. Unfortunately, there was a time when it appeared that Bangladesh might, given a concerted effort to ensure collective amnesia.

It is hardly surprising that the Jama’at-e-Islami Bangladesh (Jama’at), its students’ wing Islami Chhatra Shibir (Islami Chhatra Shangha until 1971), its allies like Nezam-e-Islami and spawns like al-Badr, al-Shams and Razakars, and other collaborating organisations and individuals, did their best to deny the genocide and the mass rapes. Maj Gen Zia-ur Rahman (Zia), who grabbed power following Sheikh Mujibur Rahman’s assassination, also did the same besides rehabilitating the collaborators and trying to annihilate the Awami League. This was in keeping with his mindset as revealed by his drive to Islamise Bangladesh, destroying the secularism enshrined in its post-Liberation 1972 constitution and establish close ties with Pakistan.

Zia’s attitude towards the victims of the Liberation War, in which he is said to have been forced to participate by Bengali troops of his regiment who had made him their prisoner, was revealed by his Government’s closure of the rehabilitation centres for raped and tortured women, established when Sheikh Mujibur Rahman was in power. His assassination on May 30, 1981, did not change matters. Lt Gen HM Ershad, who came to power on December 11, 1983, following the removal of two civilian Presidents through two coups, pursued the same approach until he was forced to resign as President on December 6, 1990, following a massive popular upsurge.

What Zia, Ershad and the other generals, who either supported — or did not oppose —them did is entirely understandable. In the introduction to his book, Bangladeshi Generalder Mon (The Mind of Bangladeshi Generals), Muntassir Mamoon points out that they were steeped in the Pakistani mindset. The latter included extreme communalism and sectarianism, use of religion, the furtherance of group interests, violence, unbelievable anti-Indianism and destruction of civilian authority. Mamoon further states in his introduction that 20 out of the 21 Bangladeshi Generals had been trained as officers at the Pakistan Military Academy at Kakul, Abbottabad, in the Pakhtunkhwa province, where they had come to acquire the Pakistani mindset. The influence of their training was so strong that they could not get over it despite their participation in the Liberation War. It is no surprise then that they had a natural affinity with the Jama’at, whose weltanschauung was very similar to the Pakistani mindset.

The Bangladesh Nationalist Party’s first innings in Government, stretching from 1991 to 1996, with Begum Khaleda Zia as Prime Minister, had a different agenda. It sought to project Zia as the sole hero of the Liberation War and simultaneously sought to play down Sheikh Mujibur Rahman’s role as the architect of the country’s freedom struggle and the Father of Bangladesh as a nation. It, therefore, sought to project some aspects of the events of 1971 and relegate the rest.

Yet the memories did not die. They were too horrific to be forgotten, particularly by the families of the victims and their children and grand-children. Nor were they forgotten by the witnesses to the mass slaughter and rape. There, however, was the serious danger that, with the passing of generations, memories would burn in fewer and fewer hearts and be reduced to a passive presence in the backwaters of the popular mind. It seems that far from this happening, a beginning has been made  for increasing salience in the public mind thanks to two remarkable organisations and their leaders.

The first was the Ekatturer  Ghatak Dalal Nirmul Committee (the Committee for the Eradication of the killers and Collaborators of Seventy-one) that, established in January 1992, has tirelessly sought to bring to justice those who killed and collaborated with the Pakistanis in 1971. Shahriar Kabir’s landmark book, Ekattorer Ghatak O Dalalra Ke Kothaye (The Killers and Agents of Seventy-one: Who Where), has played a signal role in identifying and locating them. The organisation has played an important role in keeping alive the memories of 1971 by focussing on Bangladeshis like Ghulam Azam, Ali Ahsan Mohammad Mojaheed and Quader Ali Molla, all from the Jama’at, who perpetrated atrocities along with the Pakistanis. Needless to say, all of them were from the Jama’at.

A more direct role has been played by the 1971: Genocide-Torture Archive and Museum founded on May 17, 2014, at the initiative of the noted Bangladeshi historian, Professor Muntassir Mamoon. The only genocide museum in Bangladesh as well the whole of South Asia, its importance was recognised by Sheikh Hasina, who offered it a plot of land and a building. The museum began functioning from its own premises from March 26, 2016. It is now going to have a much bigger building of its own.

Of the many ways it seeks to keep memories of genocide and Bangladesh’s struggle against it alive is by holding conferences and seminars. The latest one was an international conference, held on November 22 and 23 in Dhaka and was titled, “Genocide of 1971: Golden Jubilee of Bangladesh and Birth Centenary of Bangabandhu Sheikh Mujibur Rahman.” The deliberations covered a whole gamut of subjects, including Sheikh Mujibur Rahman’s architectural role in leading Bangladesh to freedom, the Liberation War, the mass murders and rape that occurred and the need to bring the perpetrators of the last to justice. Condonation of genocides encourages further genocides.