Anxiety in the N-E

Anxiety in the N-E 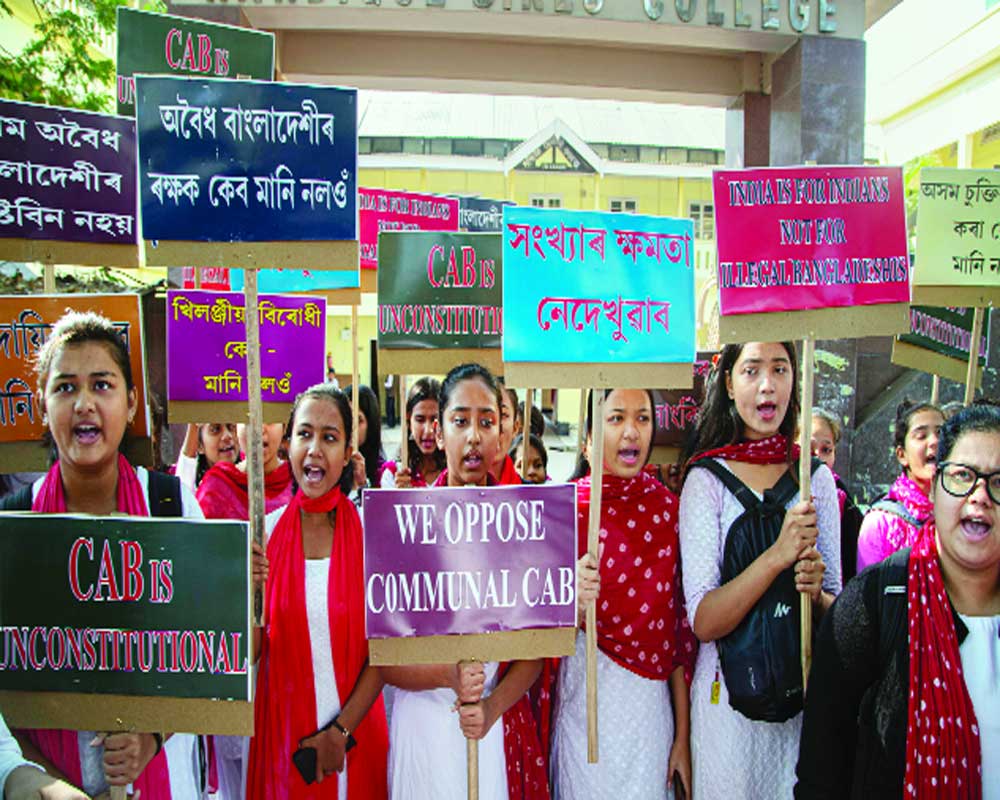 The problem with identity politics is that it thrives on resentment and insecurities of social groups, fragmenting them further instead of galvanising them into a cohesive social structure. The manipulative politics of extremism feeds off mutual anxieties, creating an entirely different context of relevance that does not depend on governance. So the Citizenship Amendment Bill (CAB), 2019, which was passed by the Lok Sabha on the strength of the numbers of the ruling dispensation, is a deeply unsettling piece of legislation as it pits all kinds of otherness versus each other. This is the reason why there’s a huge unrest in the North-east with indigenous groups fearing the influx of Hindu refugees from neighbouring Islamic countries that the Bill enables would swamp their culture and economy as it has historically. There have been torchlight vigils, students have taken to the streets in massive numbers and the 12-hour bandh has stalled all North-eastern States. This despite assurances that the Bill would not be applicable to Arunachal Pradesh, Nagaland and Mizoram where the Inner Line Permit (ILP) system exists and those tribal regions of Assam, Meghalaya and Tripura which are governed under the Sixth Schedule of the Constitution. The Bill proposes to grant Indian citizenship to fleeing Hindus, Sikhs, Buddhists, Jains, Christians and Parsis, who are residents of Pakistan, Afghanistan and Bangladesh and are persecuted there. It does not reference other neighbouring countries like Sri Lanka, Myanmar or China from where refugees could come in but predicates it solely on the championship of the post-Partition Hindus, namely those left in Pakistan and Bangladesh. So it excludes persecuted Muslim sects from the same countries, the Shias and Ahmadiyas. In other words, non-Muslim immigrants would not face deportation and Muslims would, making religion a key criterion for asylum. It also proposes to reduce the mandated 11 years of residence in India for eligibility to six years, thereby hastening the cooption of Hindu refugees into the mainstream. The BJP wants to neutralise the Muslim infiltration in border States, encouraged by votebank politics of past years, with a Hindu influx and effect a demographic change. But this nationalist spiel, in turn, threatens locals, particularly in Assam.

Ethnic Assamese groups have consistently raised concerns about the Bill being contradictory to the spirit of the Assam Accord and the just-released National Register of Citizens (NRC) list. They argue that the Bill granting citizenship to Hindu refugees from across the border till the cutoff year of 2014 would swamp Ahom identity and the right of indigenous people over their land, opportunities and resources. Truth be told, the BJP has been pushing the citizenship Bill so that lakhs of Hindu families left out of the NRC would automatically be rehabilitated here. For the Assamese, any facilitation of Bengali Hindu immigrants is a remnant of the colonial legacy that saw Bengali civil servants and businesses take over the socio-economic matrix. For a long time, till 1876, Bengali was the operable language in the State. By virtue of territorial contiguity, the Bengali-domination meant a continuous infusion of Bengalis, exacerbated by the Partition and then the 1971 Bangladesh war. So even if their tribal pockets are protected, the Assamese fear that if Bengali-speaking illegal immigrants, especially those in the Barak Valley, are granted citizenship, they would outnumber the locals, as it has happened in Tripura where Hindu Bengalis have edged out indigenous people from even claiming the political space. The royal scion of Tripura, Pradyot Manikya Debbarma, has been spearheading the cause of the tribals. In fact, the BJP may be playing down the dissent in Assam but language and cultural pride of the Assamese have led to emotion-driven mass movements. Let not anyone forget the Bongal Kheda or the organised ethnic cleansing of Bengali Hindus that originated in the late 1940s and continued into the 1960s. The turbulence saw significant property damage, ethnic policing, street violence, conversion of Bengali-medium schools into Assamese and attacks on Bengali students in educational institutions. Similarly, the Mizos, who have struggled to establish their supremacy in power structures, are fearing a massive influx by Buddhist Chakmas. In turn, the Chakmas fear they could be denied citizenship under NRC and with Mizoram exempted from the CAB, protectionist permits would mean that they would be displaced despite being settlers for decades and have to move to other States. With discriminatory attacks, there will be large-scale internal displacement of people for which nobody has any answers. The sub-nationalism of ethnic groups may just take the wind off the sails of Hindu-dominant nationalism.