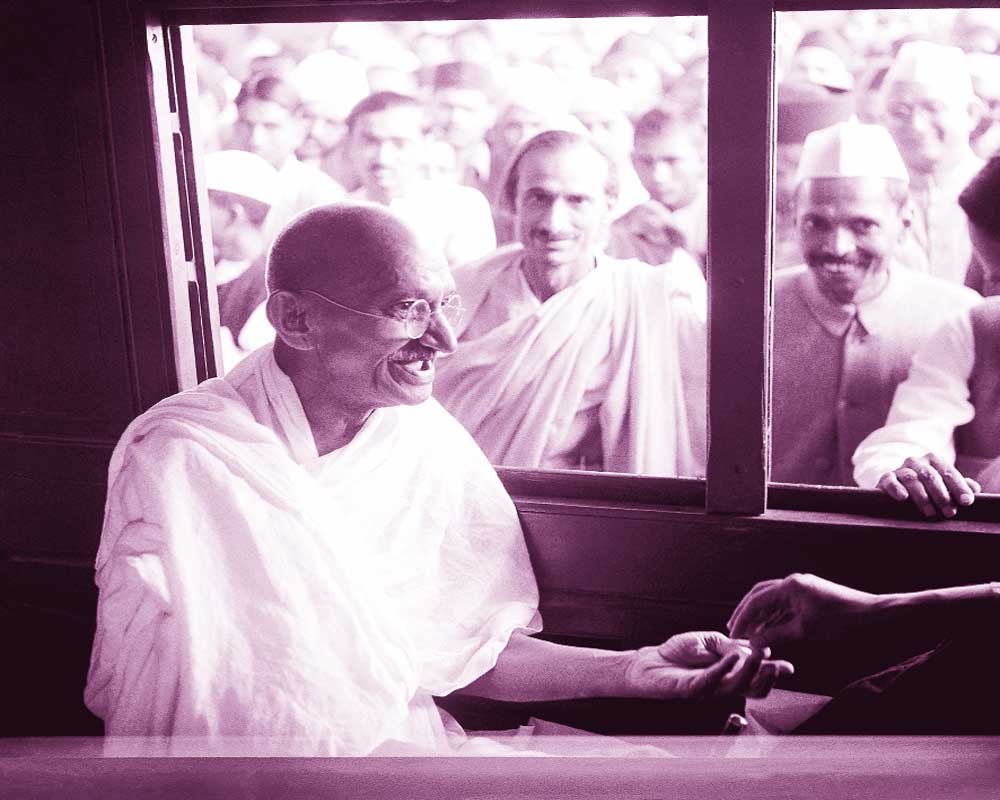 Though the Mahatma elicited devotion, he remained in a dialectic relationship with most of his contemporaries, including Tagore, Ambedkar and Jinnah

Mahatma Gandhi had to struggle all his life to make people understand his ideas and beliefs. Though his devoted followers gave him unconditional support and responded passionately to his calls, a gap always remained between his ideas and their implementation. He was misunderstood all through his life and afterwards. Though the Indian National Congress (INC) accepted non-violence as its creed, it had more than once defied him. Gandhi had to put his life at risk to demonstrate the power of satyagraha (power of truth) to his followers.

It was in 1922 when the gap between him and his followers was the most explicit. His decision to immediately stop the Non-Cooperation Movement after the Chauri Chaura incident, in which protesters set the local police station on fire, killing all 22 policemen, baffled everyone, including his close associates like C Rajagopalachari and Jawaharlal Nehru. Some of them even took it as a betrayal and termed him a British lackey.  But Gandhi stood firm, saying that the people were not yet ready for a non-violent struggle.

The disillusionment was so deep that many young people, including Ram Prasad Bismil, Chandra Shekhar Azad and Bhagat Singh, joined the armed struggle. INC and Gandhi had to counter the creed of violence during the remaining part of the freedom struggle.

Ten years later, the same thing happened. Gandhi successfully led the Civil Disobedience Movement in 1930 that started with the dramatic Dandi march and forced the British Government to abolish salt tax and formally recognise the INC as the representative of the Indian people. The outcome in terms of social reformation and organisational penetration was also huge. The movement resulted in the Government of India Act, 1935, which provided local provincial governments to Indians.  Above all, British authority was discredited and eroded.

However, it could not satisfy an influential section of Congressmen for the movement failed in gaining independence.  They concluded that the Gandhian way of struggle would not yield results. These leaders, who were lodged in Nasik jail, decided to form the Congress Socialist Party to revolutionise the Congress. The group had people like Acharya Narendra Dev, Jai Prakash Narain and Ram Manohar Lohia.  The Congress socialists openly opposed non-violence as the guiding principle and declared Marxism as their philosophy. However, Gandhi blessed the party and helped it grow. In later years, Narain, Lohia and most other leaders shunned Marxism as their creed and became followers of Gandhi. But by that time the Mahatma was not there to see the change.

Gandhi remained in a dialectic relationship with all his contemporaries, including Rabindranath Tagore, BR Ambedkar and Muhammad Ali Jinnah. Misunderstandings between them had serious repercussions for the Independence struggle.

After returning from South Africa, Gandhi went straight to Shantiniketan and stayed with Tagore for a month. The interaction led to a life-long friendship. Gandhi called him Gurudev and Tagore gave him the title of Mahatma. However, Tagore was a staunch critic of the charkha (spinning wheel) and also angry over Gandhi’s ideas on the caste system.

Gandhi’s relationship with Ambedkar was never smooth. He was very critical of the Mahatma’s ideas of gram swaraj. For Ambedkar, the village system was oppressive and he believed that the only way to bring social democracy in India was to modernise the villages. He was also strongly opposed to Gandhi’s ideas on removal of untouchability and never endorsed the term “Harijan” for the depressed classes. He impressed upon untouchables the importance of self-help, self-elevation and self-respect and preferred direct action against untouchability. Gandhi never supported Ambedkar’s direct action programmes because he felt that they would invite backlash from caste Hindus.

Misunderstanding was at its peak when Ambedkar supported separate electorates for the lower classes given under the Communal Award, 1932. Gandhi found it divisive and went on an indefinite fast. It forced Ambedkar to sign the Poona Pact on September 24, 1932. Dalit leaders never accepted Gandhi’s move and considered it treachery. They argued that the general electorate did not allow true leadership to emerge and only stooges of the upper castes got elected. Was Gandhi opposed to the cause of Dalits? When we look closely at the Poona Pact, we find that Dalits got almost double the number of seats in provincial Assemblies and the Central Assembly. They were given reservation in jobs and education. Above all, the upper caste leadership recognised their rights after discrimination and exploitation of centuries. Till date, reservation plays an important role in taking Dalits towards their rights.

Gandhi faced a long and torturous trial in the 1940s. Generally, his visit to Noakhali, his Brahmacharya experiments and fast at Kolkata are considered as the final trials. However, his trials began on September 1939 with the declaration of World War II and ended on January 30, 1948 with his death. During the period, his ahimsa was on trial on several occasions.

Initially, Gandhi was sympathetic to the British but opposed to the war. The INC was hardly ready to accept his form of non-violence and the party was divided on supporting the British Government in its war efforts. His most trusted lieutenant Nehru was ready to join the Allied forces to defeat the fascist forces. Gandhi’s other disciple, Subhash Chandra Bose ultimately joined hands with the fascist forces. One of his trusted friends Rajagopalachari was so desperate to join the Government that Gandhi had to ask him to resign from the Congress. His loyal soldiers such as Rajendra Prasad and Sardar Patel showed deviations and supported the Bardoli resolution which stated that Indians would cooperate in the war if the British Government agreed to grant them independence. The Bardoli resolution of December 30, 1941, even accepted Gandhi’s request to relieve him from the responsibility of “guiding” the INC. He had made this request because he believed that supporting war efforts would mean an abandonment of non-violence.

However, the INC soon went back on its acceptance of Bapu’s request to relieve him and Gandhi was again at the helm of affairs. However, Congress leaders were not ready to accept his interpretation and they viewed his insistence on non-cooperating with the British in their war efforts as support to Japan.

Nehru was extremely unhappy over it and he vehemently opposed Gandhi’s resolution at the Congress Working Committee (CWC) meeting at Allahabad in April 1942. However, Nehru did not take much time to amend his line and supported the Quit India resolution, which was a clear opposition to the British and the allied forces.

Very few are aware of the painful events that followed Gandhi’s arrest on August 9, 1942, a day after the Quit India resolution was passed by the All India Congress Committee at Mumbai. He was imprisoned at Yerawada Jail in Pune. Kasturba Gandhi was also arrested and she was imprisoned in Arthur Road Jail in Mumbai. But was sent to Pune after she became severely ill.

When Gandhi saw Kasturba in Aga Khan Palace, his first question was, “Did you ask for your transfer?” How could she ask for a favour when total non-cooperation was going on against the Government?  After remaining ill for nearly 18 months, Kasturba died in the prison for want of proper medical care. Gandhi had already lost his closest associate Mahadev Desai within a week after his imprisonment at Yerawada Jail.

When the British released Gandhi on finding him in precarious health, he saw that the people had violated his principles of non-violence and most of the Quit India Movement was violent and bloody. He denounced the violence. Though Nehru and Patel took responsibility for the violence during the movement, Gandhi distanced himself from their sacrifices. It came as a shock to the heroes of the Quit India Movement but Bapu did not change his stand.

The final trial began when India’s Independence was nigh. He tried hard to preserve unity but failed. Jinnah was not ready to believe him and the Congress leaders were not listening to him.  Communal violence across the country shook Gandhi. He always claimed to be a devout Hindu but was killed by a fanatic Hindu who considered him as an enemy of the Hindus. Did he deserve the trial?

(The author is editor of a news portal and writes on politics and rights issues.)