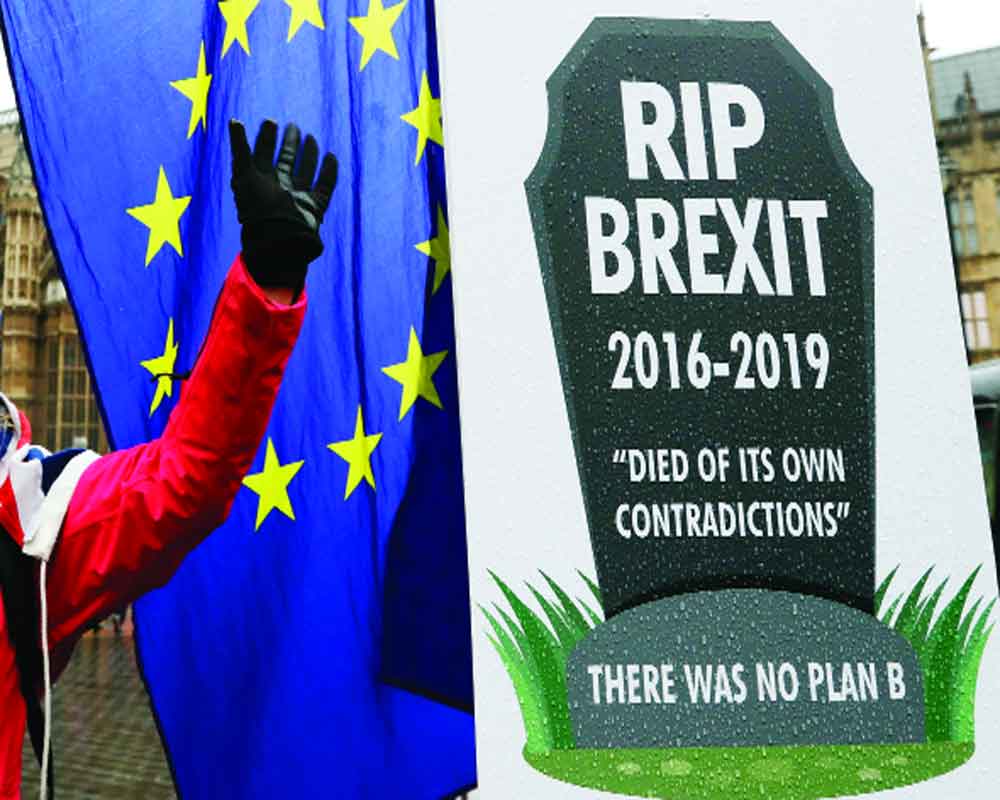 Best course of action for the UK is to delay the Brexit date. This will simply allow the Britons to decide whether to remain within the EU or get out. With more time, a new deal could be negotiated wherein both UK Parliament and the EU may come to an agreement either for a permanent customs union or a Norwegian-style model

Brexit or no-Brexit — each seems to be an uncharted territory for British Prime Minister Theresa May. It is even worse for the people of Britain. Britain is tired of Brexit. It is more of an equivocal issue today that demands serious consideration of the grievances of both the “Remainers” and the “Leave Campaigners”. Much beyond this, the politicians of all hues in Britain must realise that instead of mudslinging, they all need to bring the Brexit debate to an end.

Today, many of the chatbots are airing the public anger that is strongly noticeable across many parts of Britain. Brexit is not as murky as many of us think and interpret. Initially, a considerable section of the academia, journalists, political pundits and commoners veered around the view that it is beneficial for the EU, the UK, and the Commonwealth if Britain remains within. This was the centre point of many debates and dialogues that preceded the historic referendum on June 23, 2016.

Indeed, a concatenation of issues that are questioning the very existence of the EU system finally led to this referendum vote. Also people are bringing home the message that their existing political system has less and less to do with the lives of the ordinary folks.

On that fateful day of Brexit referendum, the exit camp prevailed over the Remainers, but not by a significant majority. The Leave Campaigners received 51.9 per cent votes, whereas the Remainers got 48.1 per cent. The turnout in the referendum was 71.8 per cent, with more than 30 million people voting at that moment. Though the margin of votes between the two groups was thin, the protest registered by the leave campaigners was very significant. When the historic vote took place almost three years back, it clearly showed the differences among the people across the country. England voted for Brexit by 53.4 per cent to 46.6 per cent and for the Wales region it was 52.5 per cent to 47.5 per cent. However, both the Northern Ireland and Scotland backed their demands of remaining in the EU. The Scottish voters backed the remain vote by 62 per cent to 38 per cent, whereas 55.8 per cent in Northern Ireland voted in favour of the Remainers and 44.2 per cent supported the Leave Campaigners.

Many of the people who supported the Remainers camp now feel that they have misjudged the depth of common public anger and their serious disenchantment with the EU. Writing on the wall is clear: Britain can no longer remain in the EU the way it used to be before the Brexit deal. It is interesting to note why the current imbroglio continues around Brexit. It is in public domain today that UK has to leave the EU by March 29 this year. For the UK to formally leave the EU, the former had to invoke Article 50 of the Lisbon Treaty that offers two years time to both the parties to decide the terms and conditions of separation. Prime Minister May initiated this formal process two years back on March 29, 2017, meaning the UK is leaving the EU in coming March 29. However, the EU court ruled that the UK can decide to stop the formal split. Again, the entire process can be extended if all 28 members of the union agree for the same.

Now the problem around the Brexit deal is that May has made separation process a law. Hence preventing the Brexit with the EU would immediately require a drastic change in this law in the UK. On December 10, 2018, the European Court of Justice ruled that the UK could cancel Article 50 even without the permission of the rest of the 27 members and remain within the Union as per the existing statutes, provided the decision follows a democratic process. But the question is that how that democratic process will follow, looking at the current splits within the rank and file of the Conservative Party and the Labour Party. Worse is that there is a marked difference and confusion among the MPs of all the political parties.

What is shocking is that no plan by any modern British Government has been so humiliatingly rejected the way the Brexit deal was by Parliament on January 15. After five days of continued debate, it was rejected by 432 MPs while only 202 stood by it. Sadly, her own Conservative Party backbenchers voted against the agreement by three to one.

For May, it was a humiliating defeat and for the Brexiteers it would be really difficult to look for a fresh withdrawal agreement in the near future. The deal was the fulcrum of May’s career as the Prime Minister as she took over nearly two years ago while hammering it out with the uber bureaucrats in Brussels.

The way the Brexit impasse appears today is because of May’s ways and means in trying to force her lawmakers to vote for it. Before the vote, she warned the Conservative MPs saying voting against the deal would lead her Government to “no Brexit at all”. Her doggedness led to what the international community witnessed on January 15.

When it comes to the main Opposition party, the Labour, its leader Jeremy Corbyn is equally confused and frustrated about what is really happening in Parliament and outside. Just before the vote on the Brexit deal agreement in Parliament, Corbyn made it clear that his party will vote against it. But he failed to offer a plausible course of action on his party’s behalf. Experts call it the abdication of Labour’s responsibility as a credible Opposition which directly makes it complicit in the current crisis. Sadly, his indecisiveness demonstrates his hollowness of the promise that he is in favour of handing over power to his MPs to voice over crucial issues that Britain is facing today. What irritates many of his MPs is that he is time and again ignoring their call for a second referendum on the Brexit deal. He argues that the separation terms from the EU must provide the same benefits to Britain as it would to any other existing member country of the single market and should allow his country to manage the issues related to migration on its own. The EU would never ever agree to it even if Corbyn comes to power in future. His fervent attempt is to try for a fresh election wherein he hopes his party will form the next Government. But he is not supporting another referendum. He appears to accept that any referendum must have an option to remain in the EU. Even after making such remarks, he confuses people by saying “we can’t stop Brexit”. His shock doctrines may simply drive Britain to more catastrophe and finally to his unique style of disaster socialism of sort.

Best course of action is to delay the exit date. This will simply allow the Britons to decide whether to remain within the EU or not. But the EU shows no interest in renegotiating the Brexit deal. Hence the only way to sort out the crisis is to ask the EU for some more time. With more time, may be a new deal could be negotiated wherein both UK Parliament and the EU may come to an agreement either for a permanent customs union or a Norwegian style model. Succinctly, both of them demand compromises on the part of the EU and British Parliament. What brings home contrast is that the modern British political history is witnessing a clash between direct democracy and indirect democracy. When the offer of referendum was given to people they voiced their concerns, but their representatives are now struggling in Parliament to either say yes, or no on what the people voted for.

Hope the exit deal does not remain elusive as it appears today. The British MPs may restrict themselves from haring off in all directions, irrespective of their party affiliations. For the Prime Minister to stay on course, while venturing out to hammer ‘must’ from her colleagues, it is better to consider and ponder over what ‘May’ happen in the coming days. Her short premiership should not be so evanescent that she is remembered only as a mother of all messes.