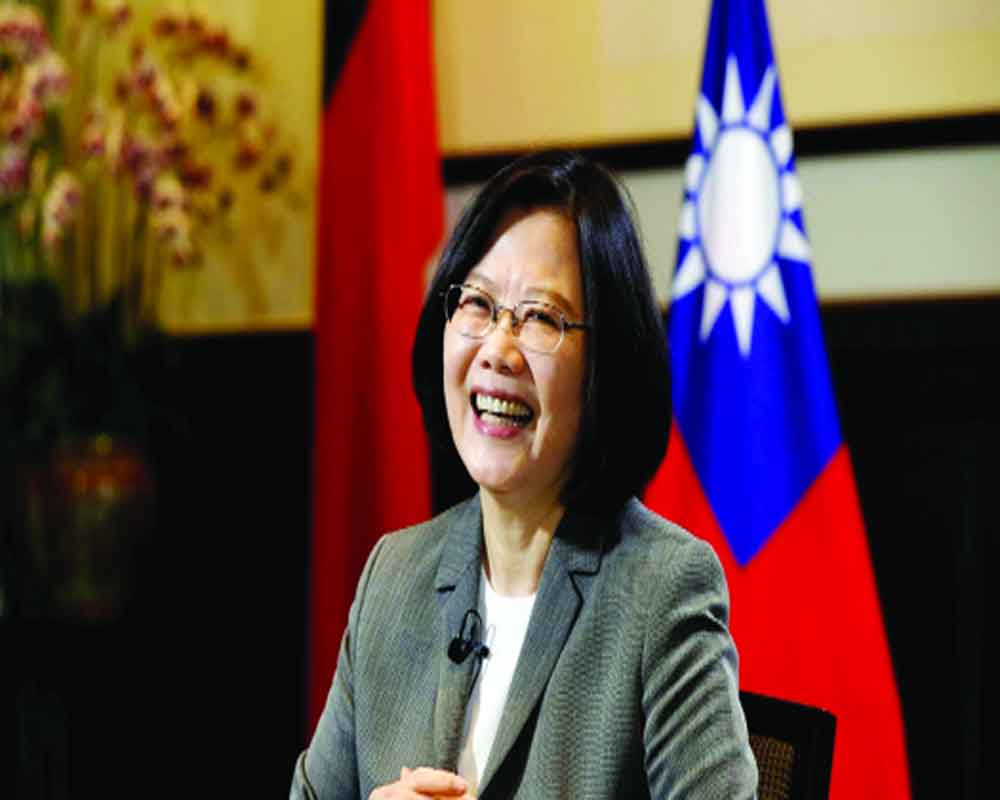 It’s imperative for the Middle Kingdom to recognise that any provocative statement will make the Taiwanese people more resilient against it. Only peace talks can resolve matters

Delivering a speech to mark the 40th anniversary of the 1979 ‘Message of Compatriots in Taiwan’ on January 2, Chinese President Xi Jinping said, “A Taiwan independent from mainland China is not an option and no person or party can stop the trend towards unification.” Xi also reportedly said that China would not renounce the idea of using force to re-unify Taiwan with China. He further said, “Independence would only bring profound disaster for Taiwan” and assured the island a bright future under a “one-country, two-system framework.”

In an equally strong reply to President Xi’s speech, Taiwan’s President Tsai Ing-wen argued that her Government does not accept the “1992 Consensus,” and emphasised that a vast majority of Taiwanese stand resolutely opposed to “one country, two systems.” She further said that the development of cross-strait relations must be based on “the four musts”: China must face the reality of the existence of the Republic of China (Taiwan) and not deny the democratic system that the people of Taiwan have established together; China must respect the commitment of the 23 million people of Taiwan to freedom and democracy and not foster divisions and offer inducements to interfere with the choices made by the people of Taiwan; China must handle cross-strait differences peacefully, on the basis of equality, instead of using suppression and intimidation to get Taiwanese to submit; and it must be the Government or Government-authorised agencies that should engage in the negotiations. Any political consultation that is not authorised or monitored by the people cannot be called “democratic consultation.” This is Taiwan’s position, a democratic one.

Of course, the tension between Taiwan and China is not new. In fact, the genesis of the conflict between them goes back to 1949, when losing the mainland China to the Mao-led Communist Party of China, Chiang Kai-Shek retreated to Taiwan, establishing Taipei as the capital of the Republic of China Government. Subsequently, China and Taiwan claimed to represent all of China.

The ouster of Taiwan from the membership of the United Nation General Assembly and its Security Council as well as the US’ decision to recognise China as a country, ending its diplomatic ties with the Republic of China in 1979, boosted China’s position against Taiwan. At the same time, the Chinese leadership focussed on using the 1992 Consensus between representatives of the Chinese Communist Party and the Kuomintang (KMT) party of Taiwan as the strongest tool to claim Taiwan as a part of China.

However, since President Tsai came to power in 2016, she made one thing very clear that her Government does not recognise the 1992 Consensus. At the same time, Tsai’s New Southbound policy to strengthen Taiwan’s ties with Southeast Asian countries and build a strong relationship with South Asian countries, including India, and other developments caused heartburn in the Chinese leadership. As if these developments were not enough for China to initiate punitive actions against Taiwan, US President Donald J Trump’s special focus on elevating ties with Taiwan accentuated the rift between China-Taiwan relations. This is evident from the fact that after being elected as President, Trump received a telephone call from Tsai Ing-wen and also initially questioned the ‘One China Policy.’ Trump signed into law the National Defence Authorisation Act (NDAA) for the 2018-19, which mentions strengthening defence partnership between the US and Taiwan as continuing US legal commitments.

The NDAA also stated that the US should invite Taiwan to participate in military exercises and consider re-establishing port-of-call exchanges between the navies of the two sides. Trump signing the Taiwan Travel Act cleared the way for the visit of high-ranking officials to Taiwan. A new de facto US Embassy was inaugurated in Taipei, among other things. In December 2018, the US President signed into law the Asia Reassurance Initiative Act, which reiterates American commitment “to counter efforts to change status quo and support peaceful resolution acceptable to both sides of the Taiwan Strait.”

In turn, while China has been extensively using its economic power to force several countries — Nigeria, Panama and others — to de-recognise Taiwan as an independent country, it also opened a new air route over the narrow Taiwan Strait separating China and Taiwan and has been carrying out military details in the vicinity. China put pressure on the International Civil Aviation Organisation to not initiate Taiwan as a guest of the Icao Assembly in September 2016. Beijing wrote letters, asking dozens of international airlines to change the way they refer to Taiwan on their websites and threatened to disrupt their operations in China if they did not comply.

Amid China’s offensive strategy against Taiwan, the defeat of the Democratic Progressive Party (DPP) in the local elections of Taiwan encouraged Beijing because the Chinese leadership saw the DPP’s electoral loss as the rejection of the Tsai Government’s efforts to make Taiwan an independent country. At the same time, the victory of the KMT in the elections was a welcome development, given its pro-China stand. In fact, Chinese state-run media depicted the election reversals as a vindication of Xi’s measures to isolate Taiwan and undercut its international standing.

But the fact remains that the defeat of the DPP in the local elections must not be seen as an indication of the change in the thinking of the people of Taiwan as far as the country’s independence and sovereignty are concerned. The reality is that in a poll, 75 of the Taiwanese respondents saw China and Taiwan as two different states. Viewing mainland China as a perverted form of Chinese culture, Taiwanese also consider their culture and tradition as pure Chinese and feel proud of their democratic institutions, freedom of Press and other liberal values. They do not want to give up these hard-earned markers.

To argue that the DPP’s loss in the elections resulted from the Tsai Government’s assertive policy towards China would be misplaced. In fact, a number of domestic issues, including her Government’s labour and pension policy, Tsai’s poor leadership, lack of strong strategy, her Government’s performance on marriage and economic policy among others were responsible for the DPP’s loss in the elections. On the other hand, the KMT planned an effective election strategy to defeat the DPP.

While saying that the use of military power cannot be ruled out to bring Taiwan under the control of China, the Chinese President completely overlooked the fact that today, Taiwan enjoys strong ties, although unofficial, with a number of countries, including all the other major powers of the world. It is also a fact that countries across the globe have recognised Taiwan as a champion of democratic institutions. At the same time, it is also a core interest of the US to see Taiwan flourish as a promising democratic and independent country. Given the fact that the people of Taiwan are aware of China’s dubious stand on ‘one country, two systems’ in Hong Kong and Tibet, Xi could not win over Taiwanese with these tactics.

Thus, it is imperative for the Chinese leadership to recognise the direction of the wind as far as the China-Taiwan issue is concerned. Any provocative statement will only make the people of Taiwan more resilient against China. At the same time, it is also the responsibility of the global community to see that Taiwan must remain a strong democratic country. It is only through peace talks that the two sides can end conflict, leading to strengthening peace, security and development in the Taiwan strait and the region.