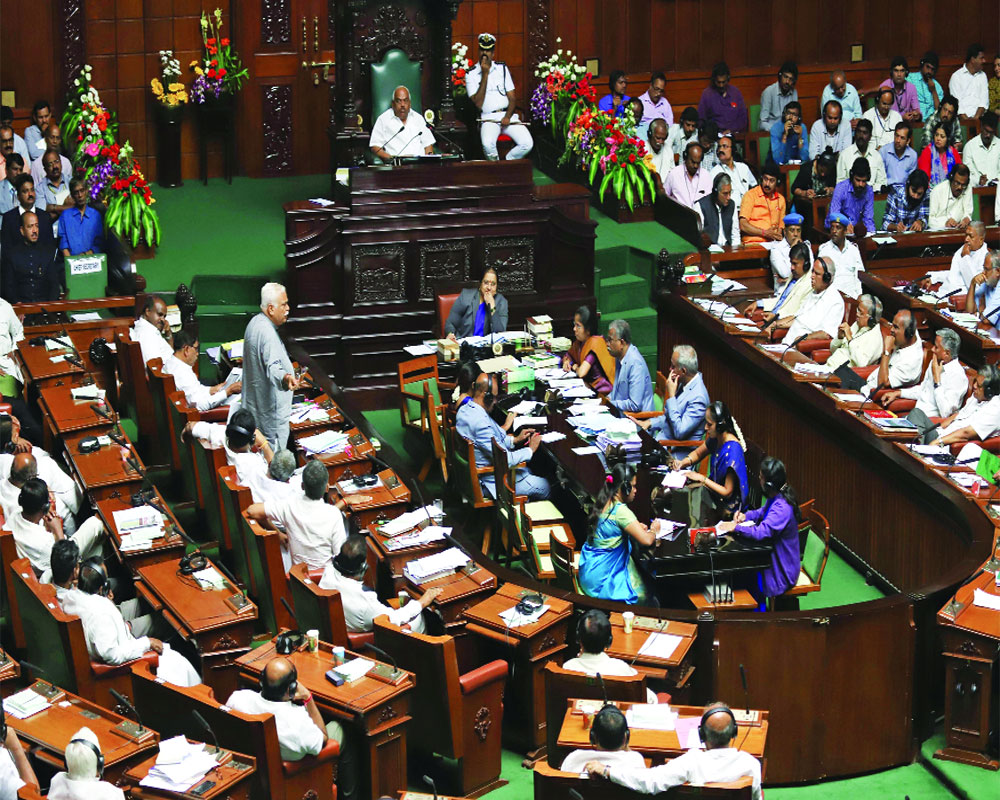 The ugly political drama in Karnataka has finally ended with the defeat of the HD Kumaraswamy Government on the floor of the State Assembly and the appointment of a new Bharatiya Janata Party (BJP) Government headed by BS Yediyurappa.

But the story is not over yet because of the Constitutional issues that have sprung up vis-a-vis the decision of the Speaker of the Karnataka Assembly, KR Ramesh Kumar, to disqualify 17 MLAs, who had earlier sent in their resignations. The MLAs wanted their resignations to be accepted and 10 of them even appeared before the Speaker to assert their right to resign from the House. The Congress and the Janata Dal (Secular) wanted them disqualified because they did not turn up when the HD Kumaraswamy Government faced a trust vote in the Assembly. The Speaker has also barred these MLAs from contesting elections afresh during the life of the present Assembly. This will now completely upset the plans of these MLAs and the new Chief Minister, who had planned to give them BJP tickets in the by-elections. The matter is already before the Supreme Court and it is likely that these MLAs will challenge the Speaker’s decision to disqualify them. Whatever the eventual outcome, there can be little doubt that this has done considerable damage to the democratic traditions in the country.

The drama began with the Congress and Janata Dal(S) rebels going to the office of the Speaker and submitting their resignations. As the resignations were tendered in his absence, the Speaker insisted that the MLAs present themselves before him because he was duty-bound to ascertain whether they were under any duress or if they were resigning from the Assembly on their own volition. Rules of the Assembly state that when the resignation letter is handed over personally and the MLA says his action is “voluntary and genuine” (and if the Speaker is satisfied), he has to accept the resignation “immediately.” If the letter of resignation is not handed over personally, the rules give the Speaker scope to begin an inquiry on whether the resignation is voluntary and genuine. He also has the right to reject such a letter. Ten MLAs met the Speaker after the apex court directed them to do so. They complied with the directive and informed the Speaker in person that they wished to resign from their seats.

Days later, when the Kumaraswamy Government had to face a trust vote, the two parties in the ruling coalition issued whips, directing their members to be present in the State Assembly and to vote for the trust motion. The rebel MLAs, having tendered their resignations, stayed back in Mumbai. Given this chronology of events and the rules regarding the resignation of MLAs, the Speaker ought to have accepted the resignations. Since the resignations were tendered before the trust vote was taken up by the House, the rebels contended that the whips issued by the two parties were infructuous.

There was something repulsive about the fortnight long drama in the State with the leaders of the Congress and the JD(S) trying every trick to win back the dissidents. A police complaint was lodged alleging wrongful confinement of MLAs in Mumbai. On one occasion, DK Shivakumar, an influential leader of the Congress in the State and a senior Minister in the Kumaraswamy Government, who tried to enter the hotel, was “escorted out” of the hotel after the rebel legislators wrote to the Mumbai police and sought “protection” from the visiting politicians from Karnataka.

The conduct of the Karnataka Speaker is in contrast to the approach of  Venkaiah Naidu, the Chairman of the Rajya Sabha, in regard to resignations. Naidu received a letter of resignation from Neeraj Shekhar, a member of the House belonging to the Samajwadi Party, on July 15. The following day, he informed the Rajya Sabha that he had accepted Shekhar’s resignation. The Chairman called the member and asked him if his resignation letter was genuine and whether he had taken the decision voluntarily. He also asked him if he would like to reconsider his decision.

When the member insisted on resigning from the House, the Chairman accepted the same “with immediate effect” and asked his secretariat to complete the formalities. He also made a formal announcement about the MP’s resignation on July 16 in the House.

Coming back to the drama in the Karnataka Assembly, it is indeed unfortunate that the people of the State failed to give a clear mandate to one political party or a pre-poll coalition in the last Assembly election in 2018. The final verdict left the BJP high and dry with 104 seats and the State ended up having a Chief Minister from the third largest party — the JD(S) — which had 37 seats and which had the support of the Congress, the second largest party with 78 seats. In the Assembly election held in 2008, the electorate gave the BJP 110 seats in the 224-member House. Yediyurappa had to entice some Independents and form the Government, which survived precariously for some time. But this was neither here nor there, and there were no easy solutions to the problem.

Following the Constitution 91 Amendment Act, it has become difficult for poachers to get MLAs to cross the floor. Therefore, if a party falls short of a majority by a few seats, the only option available for the ruling party is to entice Opposition legislators to vacate their seats and contest the elections afresh on the ruling party’s ticket. This is what Yediyurappa  did in 2008 and succeeded in bolstering his numbers in the State legislature.

It also speaks of the maturity of the electorate that some constituencies, which had never voted the BJP before, elected candidates put up by this party and, thus, voted to provide stability to the Government. This entire operation was code-named “Operation Kamala” and came in for a lot of criticism. But this writer is of the view that a few MLAs going back to the people for a fresh mandate on another party’s ticket is far better than dissolution of the House and fresh Assembly election. This is also a much better option than the shameless defection of MPs and MLAs from one party to another, which was the case until the anti-defection law came into being.

Yediyurappa was hoping to undertake a similar exercise this time, too, and get the defecting MLAs to contest afresh on a BJP ticket. This is stymied by the Speaker’s order. We will now have to await a judicial decision. Until then, a fresh round of instability is on the cards and the people will watch helplessly as another Government will hobble along.