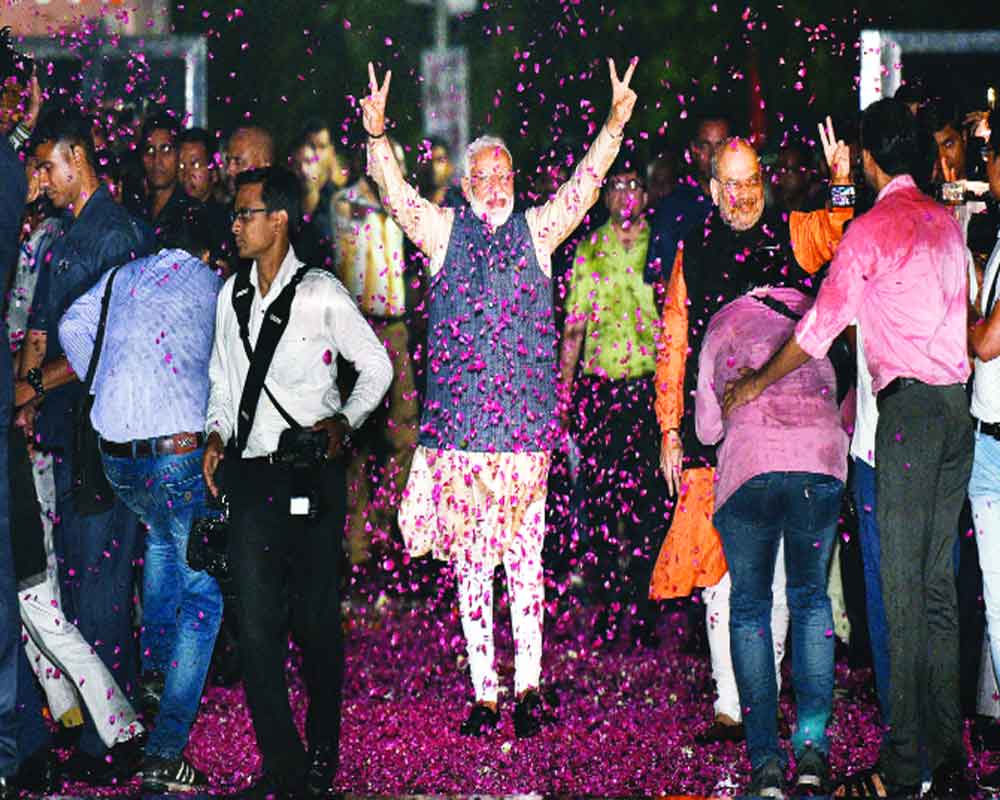 It is true that Jawaharlal Nehru was for his time, a modern person. But he could not convert modernisation into a mass movement as Modi has

The return of Mr Narendra Modi with a generous mandate for the second time makes it necessary to go into the rest of the phenomenon. When he was elected in 2014, there were experts who felt that the people had voted with their feet. Even tolerant Indians could not take the gargantuan corruption presided over by the financially honest Dr Manmohan Singh. Being entirely new to Delhi and Central politics, Modi was looked upon as a parvenu, who would play out his time rather like a cricket nightwatchman. With demonetisation, many a veteran of the Lutyens establishment was astounded. Actually, if an economy is to be modern, it cannot indefinitely run on two sledges, white and black: the latter had to be eventually eliminated. This did not make the veterans more sympathetic to Modi. Instead, in order to condemn demonetisation, they innovated and created a new expression— “informal sector” — for the Black economy.

The GST was originally initiated by the Manmohan Singh government and yet when the Modi government introduced it, the tax was repeatedly criticised by Singh’s party, the  Congress. Modi’s Pakistan policy was frequently denounced until Balakot. However, that he was the first Indian leader to be invited to address the British Parliament and to be asked for an exclusive lunch by Her Majesty the Queen at Buckingham Palace evoked no compliment from the honourable Opposition. Instead, the Prime Minister was accused of destroying institutions. In short, Mr Modi remained a parvenu in the Lutyens circle, who hoped he would be marginalised in the just held general election. In order to make sure that he does not return to power, the Congress president called him a thief on an average three times a day. Unfortunately for the Congress president and his party, the people of India decided otherwise.

Why have the people of India chosen Mr Modi for a second term in the face of the most furious opposition that any prime ministerial candidate has ever faced in independent India? Every political party in the opposition had one common programme and that was to remove Modi from power. Such a unanimous opposition agenda was last seen in 1977 against Indira Gandhi’s Emergency. But the masses of India perceived Narendra Modi as the first leader who had risen from the soil and loved his motherland more than everything else, including his own mother, whom also he loves. The people who have faith in him have not been disappointed. He has ruled for the last five years and convinced us that he has worked for the people and the country and not for himself. No previous prime minister could be tested on this touchstone. Do not think that this faith and sentiment are confined only to the Hindus; they extend to quite a number of Christians, Muslims and others, in whose veins run similar blood. Others, including many a Hindu, whose bodies reside in India but whose souls yearn for overseas, are not for Modi.

Narendra Modi is a moderniser of the country and within it. It is true that Jawaharlal Nehru was for his time, a modern person. He did think of building irrigation dams, factories that could build advanced machines, starting Indian Institutes of Technology as well as Management, giant steel plants and so on. When he became Prime Minister, the country was give or take, living in the 19th century. That India could catch up and become contemporary was not part of our thought medium. However, while Nehru did build numerous temples of modernity in a dominantly agrarian society, he did not bring about a revolution in the minds of the people that they needed to modernise and in turn, could put their shoulder to modernising the country. In other words, he could not convert modernisation into a mass movement.

Rajiv Gandhi was brought up in a contemporary environment and had spent time in England. He then learnt to fly aeroplanes; then a transport medium of the latest variety. He understood machines and certainly chose more or less the best passenger aircraft in the Airbus. An equally good choice was the Bofors artillery gun, if we overlook for a while the financial scandal attached to it. Gandhi, as it were, grew up parallel with the growth of the computer and could operate the electronic machine with aplomb, and he did try to introduce its use in government institutions. But before he could go far, he lost the 1989 election and went out of power. In any case, he might not have been able to go very far because he could not motivate men with the same aptitude he could move machines. Before we move to another prime minister, we should not forget to record that millions of telephones were installed in India during Rajiv Gandhi’s time.

Prime Minister P. V. Narasimha Rao, compelled by dire financial circumstances as he stepped into power, did bring about an economic revolution. From a party wedded to a socialistic pattern of society, it had now no choice but to overturn it into promoting laissez faire. In short, he embarked on a path of economic liberalisation as a step towards globalisation. Atal Bihari Vajpayee took liberalisation forward to some extent. His main contribution, however, was introducing the construction of modern highways, which can be considered a step towards modernisation.

To come back to Narendra Modi, he launched modernisation along with preaching its importance; of all places, from the ramparts of the Red Fort in his first Independence Day speech. He began with according  importance to society with the slogan Swacch Bharat. Even earlier, his election campaign theme of 2014 was development, which willy-nilly implied modernisation. “Sabka Saath Sabka Vikas” clearly implies participation of all for the purpose of progress.

One of the first steps Modi took after becoming Prime Minister was to abolish the Planning Commission with the help of a Cabinet resolution. This was possible because Nehru had set up the Commission by a Cabinet decision. Such a Herculean economic step was taken without going to Parliament, perhaps because Nehru was apprehensive that the comparatively conservative members of the Constituent Assembly might not approve of such a commission. After all, national planning was introduced by the Soviet Union in the name of Gosplan. Incidentally, one of the reasons for the collapse of the Soviet economy was the excessive powers assumed by Gosplan.

As the years went by, the Yojana Bhavan in India began being misused for manipulating power over the States. Money was allotted generously, provided the State Government toed the Central government line. Whether the money allocated was used or misused depended on the State Government. The Planning Commission’s work ended with sanctioning the year’s Plan expenditure. The Finance Ministry disbursed the money. Thereafter, implementation and monitoring were entirely the State’s function. In the bargain, there was over-expenditure, misuse of funds and inflation. With the abolition of the Commission, inflation has come down quite remarkably.

Many reforms were introduced, especially keeping the poor people in mind. It is not that the previous governments had not thought of them, but a large chunk of the money earmarked was kept back by middlemen. As Rajiv Gandhi in his time had said, only 15 per cent reached the poor person. Mr Modi’s policy has been to ensure that all poor people should have their own bank accounts, wherein monies due to them can be remitted directly. All in all, it would be fair to say that through the last millennium, India experienced popular badshahs and hateful nawabs, benign rajas and cruel ones and the British rulers. But Narendra Modi is the first one who truly belongs to the soil of India. A 12-year-old schoolgirl discussing Modi was quoted saying that the measure of love is what one is willing to give up for it. And Modi intends giving himself to India.

(The writer is a well-known columnist and an author. Views expressed are personal.)