No more dying to give life

No more dying to give life 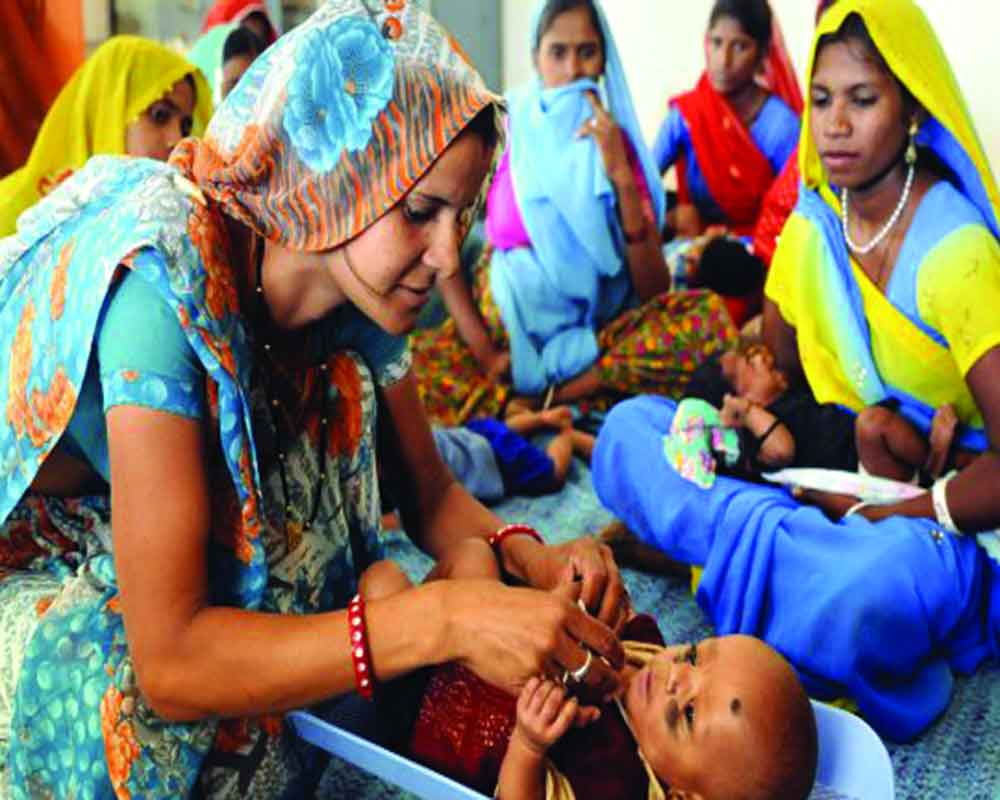 Dr Himaja is worried. Tests conducted during Chandrakala’s routine antenatal visit to the telemedicine centre in the tribal mandal of Paderu in Visakhapatnam district, Andhra Pradesh, indicate the 17-year-old is down with malaria for the second time. This is not good news, especially as Chandrakala is in her ninth month of pregnancy. Dr Himaja knows Chandrakala is a high risk case, having treated her for severe anaemia and malaria just a month ago when she came for her third antenatal visit. Then, the team at the Telemedicine Centre (TMC) had rushed her to the district hospital in Visakhapatnam, 96 km away from Paderu, and ensured she was given a blood transfusion to boost her plummeting haemoglobin. They had pooled in their own money to pay for her hospitalisation, realising it would be fatal to let the impoverished woman return to her village without treatment for want of funds. This time, too, a quick decision has to be taken if the lives of Chandrakala and her unborn baby have to be saved.

Within minutes, Dr Rajyalaxmi, the empanelled senior gynaecologist based in the State capital of Hyderabad, is contacted through video conferencing and apprised of Chandrakala’s condition. Since records of all patients of the TMC have already been uploaded, it did not take Dr Rajyalakmi much time to pull out Chandrakala’s past history. She asks Chandrakala, sitting alongside Dr Himaja in front of the monitor, a few questions. But Chandrakala, who belongs to the Kondadora tribe, categorised as particularly vulnerable tribal group by the Government, is unable to understand Telugu. She only speaks local tribal dialect. Dr Rajyalaxmi advises Dr Himaja to take Chandrakala to the hospital immediately. Chandrkala does not understand the language and is reluctant to stay in the hospital as she feels it is unnecessary. But the TMC health workers make sure that she stays and gets a blood transfusion. It is this speedy action and personalised care that ensured that Chandrakala and her 18-year-old husband could welcome their first child without further complications.

Hundreds of miles away in the tribal dominated West Singhbhum district in Jharkhand, a pregnant 20-year-old Saibani Juanga is also down with malaria. Her marital family, as is the tradition, prefers to seek help of the local faith healer. Not surprisingly, their rituals prove ineffective. When members of her village, the women Self-Help Group (SHG), learn about Saibani’s plight, they convince her husband and in-laws to take her to the district hospital. They arrange a vehicle to take her there. According to doctors at the hospital, had the women not taken immediate action, Saibani wouldn’t have survived.

India has recorded 22 per cent reduction in maternal mortality rate since 2013. Although this means nearly 1,000 fewer women now die of pregnancy-related complications each month in the country, an estimated 44,000 women continue to die annually due to preventable pregnancy-related causes. For both, Chandrakala and Saibani, it was a near miss. They would have become just another statistic had they not been brought to the hospital in time.

For Chandrakala, it was Asara, a free healthcare programme working to eliminate preventable maternal and neonatal deaths in the tribal mandals of Araku, Paderu and Chintapalle in Visakhapatnam district, which made the difference between life and death.

In fact, no maternal deaths have been reported in last two years in Araku’s 181 hard-to-reach hamlets where the programme has been working, according to Vishal Phanse, CEO, Piramal Swasthya. Even institutional deliveries increased in project intervention areas — from 18 per cent in 2011 to 68 per cent in 2017.

While central to this remarkable turnaround has been the innovative telehealth project design conceptualised by Piramal Swasthya, it is a different yet effective intervention that has brought down maternal deaths in West Singhbhum. By using a unique approach to empower  women through a monthly Participatory Learning and Action (PLA) cycle, Ekjut, a Chakradharpur-based not-for-profit, managed to bring a massive decline in maternal and child mortality.

Such has been the efficacy of the PLA method that the national Government announced its decision in 2016 to use the Ekjut model to bring down maternal and neonatal deaths in eight Indian States. At present, PLA meetings are being conducted by Government frontline workers trained by Ekjut in 40,000 villages all over the country and empowering approximately one million women to take charge of their own health.

But it wasn’t always so. Health awareness among the community was abysmal when two doctors, Prasanta Tripathy and Nirmala Nair, gave up their jobs in 2002 to move to Chakradharpur in the backward and tribal-dominated West Singhbhum district in Jharkhand. State health indicators were very poor. While Neonatal Mortality Rate (NMR) per 1,000 live births was 49 in Jharkhand, the Maternal Mortality Rate (MMR) per 100,000 live births was 371 — both much higher than the national figures. So in 2003, the husband and wife duo founded Ekjut to reach out to indigenous population living in remote and inaccessible parts of the region, especially to vulnerable women and children.

By using a unique approach to empower women on maternal and new-born health through a monthly participatory learning and action cycle — during which women first identify, prioritise and analyse local maternal and neonatal health problems and then come up with strategies to address them — they were able to bring about a substantial decline in MMR and NMR.

What began with just 20 women in three villages around Chakradharpur was scaled to eight districts, involving over 20,000 women over the next five years. The women participating in the PLA used this knowledge to bring about 20 per cent reduction in maternal deaths and 30 per cent reduction in neonatal deaths in 600 villages in rural Jharkhand and Odisha, pointed out Dr Prasanta Tripathy.

In Araku, a lack of awareness, coupled with inaccessibility of the tribal mandals, meant that the Asara programme had to provide services at the doorsteps. At the forefront of this campaign are the Auxiliary Nurse Midwives (ANMs), who traverse forests and steep hills and walk several kilometres to ensure no woman dies while giving birth. Once they reach the village, the ANM conducts basic tests like blood and urine, records weight, height and blood pressure as part of the initial examination. With anaemia and eclampsia (high blood pressure with seizures) being the most common prenatal complications prevalent among pregnant women in the district, particularly in the tribal belt, the outreach service also involves comprehensive risk profiling of the pregnant women and counselling on health seeking behaviour. Free calcium and iron folic acid tablets (IFA) are also given.

The next day, all registered pregnant women are picked up from the point closest to their village. Here, at the TMC, a staff nurse records a more detailed history. Once the data collated is digitised at the TMC, these electronic health records not only help keep track of the pregnant women but are also shared with the Government’s health facilities at the time of institutional delivery.

Both these interventions have shown that it is possible to end preventable maternal death among tribal women. While the Asara model is in the process of being introduced in all 11 mandals in the tribal belt of Visakhapatnam and Ekjut, a winner of the 2015 WHO India Public Health Champion Award for its innovative PLA initiative is using the strategy to address gender-based violence. Initial findings in Jharkhand, where about 40 per cent of the married women aged 15-49 years have experienced some form of violence by their husbands, have been encouraging.