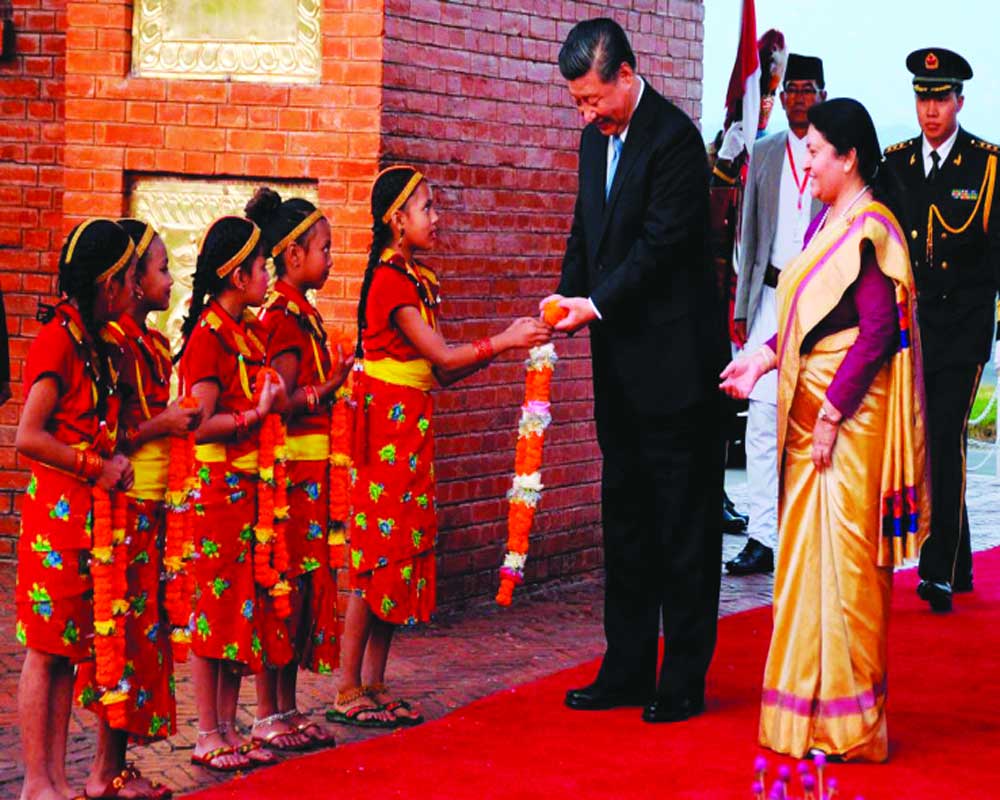 China knows that amid the unstable political environment in Nepal, people-oriented policies will continue to channelise bilateral requirements irrespective of the governments and political mood

The recently-concluded visit of the Chinese President Xi Jinping to Nepal has seen the dawn of a new phase in Nepal-China relations.

Xi’s visit to the Himalayan kingdom came 23 years after Jiang Zemin landed in Kathmandu in 1996, and the grand welcome that the President and his high-powered delegation got in Nepal overshadowed his second informal visit to India, both due to its timing and the strategic deliberations that took place.

Since the establishment of Nepal-China diplomatic relations in 1955, the relationship between the two neighbours has undergone drastic changes. From symbolic in the first four decades, to practical in the first decade of this century, their relationship has now grown into a strategic alliance marked by security, transit and infrastructural development.

As security has taken the front seat in moulding the cooperative apparatus, Xi’s visit requires close inspection and analysis in this regard.

China has deployed its Belt and Road Initiative (BRI) to widen its global outreach through land, sea and mountainous terrains. China’s unfailing advocacy in pursuing its bilateral and multilateral cooperation through the BRI platform, has in some cases, provided favourable results to Beijing.

Over the years, Chinese intentions in Nepal have been marked by a clear understanding of the geostrategic challenges and it is now making attempts to convert those challenges into opportunities. In the case of Nepal, China faces dual challenges. First is strengthen its diplomatic ties through a special economic engagement and ensuring stability in Tibet with a close eye on developments in Nepal’s deep-rooted, ‘special relationship’ with India.

Second, Nepal shares its entire northern border with Tibet, and with more than 11,000 Tibetan refugees residing in the Himalayan kingdom, fears of anti-China activities have been a real concern for Beijing.

Though Nepal and China do not have a formal strategic alliance with a defined bilateral defence policy, in last five years, the two countries have entered into security cooperation, beginning with a military exercise in 2017 and then again in 2018.

The two armies came together to exchange techniques of modern warfare and the crucial skills needed to tackle potential terrorist attacks, especially in the bordering regions. Lately, almost every defence ‘White Paper’ has categorised fleeing Tibetans and Tibetans living in Nepal and India as “terrorists”. Therefore, these joint military exercises carried the message of non-tolerance towards anti-China activities across the region.

The joint statement issued in Kathmandu during President Xi’s visit stated that the ‘two countries commit to respect each other’s independence, sovereignty and territorial integrity, and respect and accommodate each other’s concerns and core interests.’

It also witnessed Nepal’s unequivocal support to ‘One China policy, acknowledging that Taiwan is an inalienable part of the Chinese territory and Tibet’s affairs are China’s internal affairs, and Kathmandu’s determination not to allow any anti-China activities on its soil.’ As Hong Kong is witnessing violent anti-China activities with a demand for a democratic order, President Xi utilised his Nepal visit to send an authoritative message to the global community that ‘anyone attempting to split China in any part of the country will end in crushed bodies and shattered bones.’

During the visit, a total of 20 documents were signed between Nepal and China. These included pacts on the establishment of additional diplomatic missions in the sister cities; investment Cooperation Working Groups; infrastructure development in Nepal with  Chinese assistance; exchange and cooperation on governance capacity-building and early completion of the feasibility study of the China-Nepal cross-border railway project.

Out of these 20 agreements, four pacts directly focussed on the bilateral security mechanism on boundary management, mutual legal assistance in criminal matters, cooperation between the Supreme People’s Procuratorate of China and the Office of the Attorney General, Nepal and supply of security equipment from Beijing to Kathmandu.

China had also hoped that Nepal would sign an extradition treaty, but amidst criticism from the Opposition parties at home, Prime Minister KP Oli  allegedly withdrew the agreement at the last minute.

An extradition treaty with China meant that Beijing would have been able to pursue the Nepalese Government to criminalise Tibetan refugees involved in anti-China activities. This would have  jeopardised the lives of over 11,000 Tibetans who have been living in Nepal for several decades.

Though its plans have been thwarted for the moment, China still hopes that Nepal will one day accommodate its demand for the extradition treaty. That this is so, is clear from the joint statement that stated that Beijing was ‘satisfied with the signing of the Treaty on Mutual Legal Assistance in criminal matters and expressed the hope for an early conclusion of the Treaty on Extradition.’

Soon after the visit, China agreed to provide military assistance worth RMB 150 million (equivalent to 2.4 billion Nepalese rupees) to Kathmandu.

The Nepalese Deputy Prime Minister and Defence Minister Ishwar Pokharel had flown to Beijing to sign the agreement on October 19. The Defence Ministry of Nepal in its statement added that the assistance was meant for humanitarian and disaster relief works. It is a leap forward in the recent Chinese military assistance to Nepal.

China also pledged a further $493 million (56 billion Nepalese rupee) to Kathmandu to ‘uplift the living standard of the Nepali people.’

Tangibly, this was the masterstroke by Xi, because growing public support to China indeed has an impact on policy-making in Nepal. Also, Xi’s support to ‘Visit Nepal Year 2020’ was applauded by the Nepalese media and the people at large, as it will help boost tourism and hence the economy.

In his note in a Nepalese news daily, Xi added that “China supports Nepal in hosting ‘Visit Nepal Year 2020,’ and will encourage more Chinese tourists to visit Nepal.”

This move is significant as China has understood that amid the changing and unstable political environment in Nepal, the viability of trade cooperation may not provide immediate results but security and people-oriented policies will continue to channelise bilateral requirements irrespective of the governments and political mood in Nepal.

Hence, Chinese priorities in Nepal are focusing on achieving long-lasting cooperation in security, governance and people, rather than with the Government of the day.

In the changing environs of modern-day diplomacy, China’s strategy on Nepal is marked by hard gains that are critical to its national integrity and in achieving a strategic depth in the South Asian region. In order to accomplish that, Beijing has deployed a timely soft approach, involving the people of the Himalayan kingdom, young minds and soft loans.

With the advent of democracy, policymaking in Nepal has become more diverse. During the era of monarchy, decision-making was solely in the hands of the king, but the post-2008 emergence of democratic institutions has significantly involved and evolved public opinion and political biases, that have demanded that Nepal balance ties with India by leaning towards China. Therefore, the ongoing cooperation between China and Nepal challenges India’s regional presence as well as age-old ties with Nepal, which in the last five years has been marred by structural challenges, especially in the aftermath of the alleged blockade at the India-Nepal border in 2015.

Chinese assurance to South Asian countries of a greater bilateral economic and development-oriented cooperation should be an indication of the changing geostrategic environment in the neighbourhood for New Delhi. China is well aware of the fact that it lacks the socio-cultural and people-to- people ties within South Asia, whereas India enjoys an upper hand in this regard.

Hence, to tackle the growing Chinese footprint, New Delhi needs to formulate a much-required timely strategy to regain its lost ground in the neighbourhood including Nepal, if it aspires to regain its status as and remain a ‘stable power’ regionally and globally.