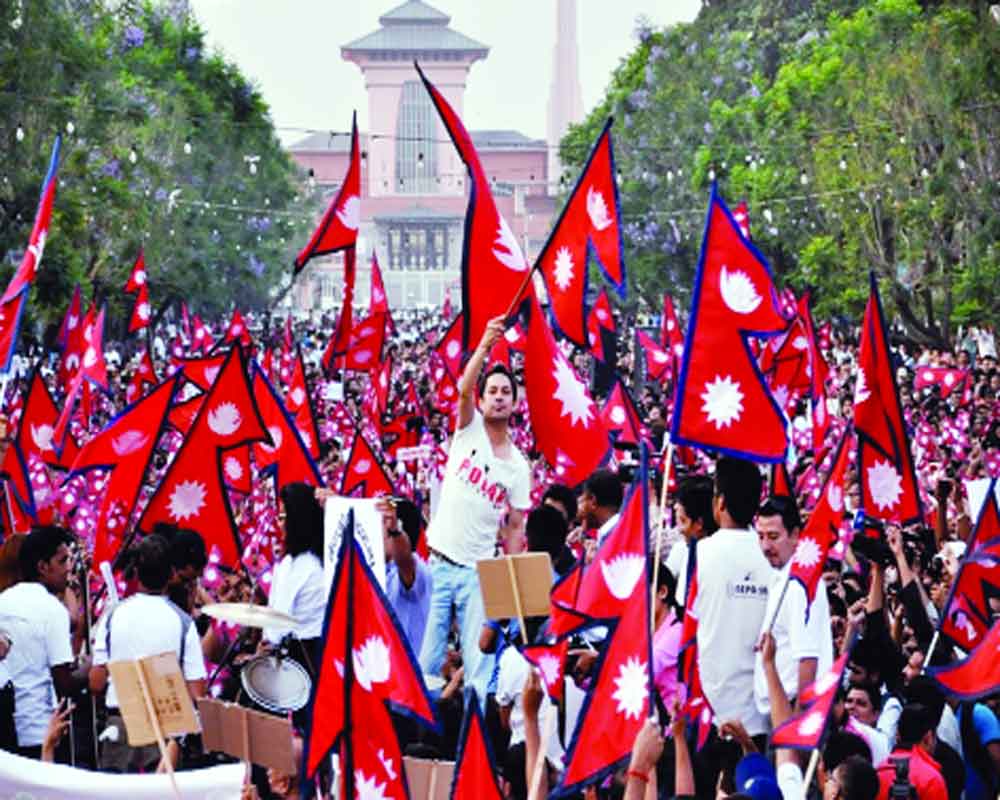 Post the economic blockade of 2015, relations between India and Nepal have moved from static to steady. The next Government must do all it can to win Nepalese hearts

In 2015, after the India-Nepal ties hit the lowest point during the promulgation of Nepal’s new Constitution and anti-India sentiment saw a new high due to an India-backed Madhesi economic blockade, bilateral ties between the two have moved from static to steady. Recovery has been through India’s hands-off-Nepal policy and New Delhi’s focus on delivery and development, in sync with Kathmandu’s prime objective of economic prosperity. The only known hiccup was last month when India’s Ambassador, Manjeev Singh Puri, met King Gyanendra at Hotel Sitasharan at Janakpur, Nepal, where the latter had gone to inaugurate the Janakpur railway project. This meeting blew up into a political row with the Kathmandu press reporting that Prime Minister KP Oli lost his cool and called off a previously accepted engagement with the Indian embassy.

With his no-show, Oli, who was to inaugurate the international Sanskrit conference a few days later at Kathmandu, left the embassy embarrassed, his displeasure over Puri meeting Gyanendra made in no uncertain terms. The accidental encounter in the lobby of Hotel Sitasharan became a storm in a teacup with Oli signalling that any Indian effort to rehabilitate Gyanendra or monarchy was not welcome. The misunderstanding was brushed aside. Some days later, India announced the visit of Foreign Secretary Vijay Gokhale to Kathmandu — days before Nepal’s prestigious international investment summit — to review the progress made on India’s developmental projects in Nepal. This is for the first time that such an exercise has been undertaken, signifying India’s earnestness to deliver on Nepal’s development.

But just then, Nepal’s Foreign Secretary, Shankar Das Bairagi, was scheduled to hold a long-delayed meeting with his Pakistani counterpart in Kathmandu. He postponed the meet to accommodate Gokhale. Not just that, a scheduled and again delayed visit of Pakistan’s Speaker of the House, Asad Qaiser, was also postponed. In India’s neighbourhood, two countries, which have been historically sensitive to New Delhi’s discomfort with their hosting Pakistani political and military dignitaries immediately before or after an important Indian visitor, are Nepal and Sri Lanka.

This de-hyphenation of India and Pakistan, especially in the post-Pulwama/Balakot environment, was seen as a friendly gesture by Kathmandu, probably intended to make up for the Sitasharan misunderstanding and appreciation of New Delhi’s reset in India’s Nepal policy. The Nepali media, which treats India with suspicion, saw its Foreign Ministry acting under New Delhi’s pressure.

India has wisely recognised that the ruling Communist Party of Nepal Government enjoys wide and popular support — an unprecedented nearly two-third majority at the Centre, majority Governments in six of seven provinces and a lion’s share in local Government posts. The No 2 Madhesi-led province is lending issue-based support to the Government. While the longevity of the Government is not in doubt, its edifice of stability is widely questioned, mainly from dissidents within the ruling party. Oli is keeping his opponents guessing by periodically announcing an imminent Cabinet reshuffle to keep alive their hopes of a Ministerial berth.

Still, never in the political history of Nepal — except in the short-lived experience with multiparty democracy in 1959 — has the country witnessed such an overwhelming political majority. Periodically, the stability of Oli’s health is questioned but if one meets him, the Kissinger quip that power is the biggest aphrodisiac, comes alive.

Still, there is Prachanda, the co-chairman of the CPN, whose prime ministerial ambitions never subside even for a third term. The integration of the Unified Marxist Leninist and Maoists in the merged CPN is essentially superficial. The joint policy document is still awaited.

A regime change is possible under two scenarios: a) an  ailing Oli falling critically ill; b) after two-and-a-half years, when the power-sharing agreement between Oli and Prachanda kicks in. Till then, Nepal will see strategic stability despite undercurrents of  tactical turbulence.

Last month, US Secretary of State Mike Pompeo congratulated Oli for completing one year in office at a time when America is revamping its interest in Nepal through its anti Tibet reciprocal move and Indo-Pacific strategies. Kathmandu is Washington’s long-standing window on Tibet.

A key political success of the Oli Government is

de-fanging the secessionist Free Madhesh-America-trained leader CK Raut through an 11-point agreement. His political platform, Alliance for Independent Madhesh, has been re-named as the Janmat Party. The main Opposition, the Nepali Congress, is accusing Oli of releasing from jail a traitor like Raut and banning underground Maoist Netra Bikram Chand (Biplav), who is demanding good governance, strengthening of institutions and probity but resorting to violence.

The Biplav group — estimated to have 300 to 2,000 cadres with 500 weapons — is the only breakaway underground Maoist entity, which was declared a criminal group last month, outlawed and served notice to surrender in 35 days, a deadline which has passed. It had disturbed the 2017 elections with the use of explosives and firearms, resulting in several casualties. It has also promulgated partially successful countrywide bandhs. The last of these coincided with the international investment summit. Fear of Biplav is palpable. Even Prachanda has admitted he could be Biplav’s No 1 target and sarcastically advised to keep one bullet for Prachanda when he does anything wrong.

Most political parties want the Government to negotiate with the Biplav group but Home Minister Ram Bahadur Thapa (Badal), an erstwhile military commander of the Maoists along with Biplav and Nand Kishore Pun (now Vice President of Nepal), has said that military/police action will be taken to bring Biplav to book.

Surprisingly, the Nepal Army reportedly issued a statement expressing that dialogue and not force should be the preferred option. The Nepal Army remains a highly respected and trusted institution in the country. Earlier it had also objected to Oli arrogating to the Prime Minister the authority to mobilise the Army in case of emergency, abridging Constitutional procedures. This is cited as yet another instance of Oli centralising power in the Prime Minister’s Office.

New Delhi is playing by the rule book in reclaiming its primacy in Nepal whose policy — amity with all, enmity with none — is being showcased by Foreign Minister Pradeep Gyawali. Despite the Wuhan spirit, the Chinese have been very active in grabbing the space vacated by India following the avoidable economic blockade. India has to win back Nepalese hearts and minds which Prime Minister Modi had captured through his memorable oratory in Nepal’s Parliament in 2014. In 2019, that will take some doing.