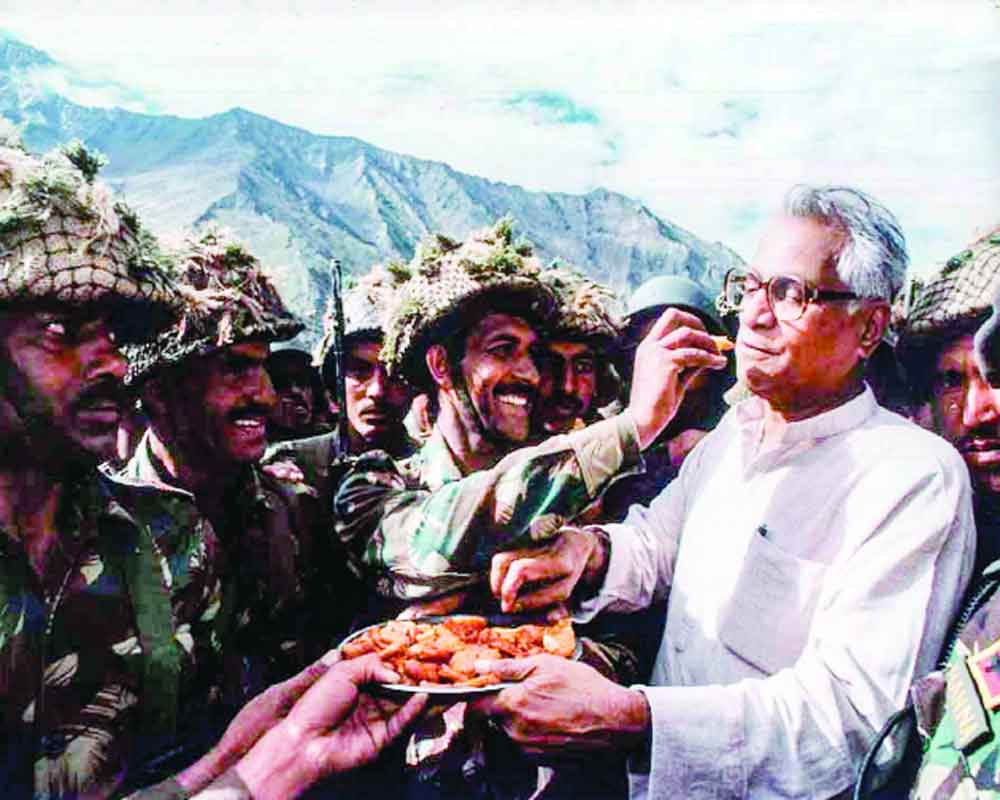 George Saab was one of the best Defence Ministers for whom the welfare and well-being of the Army personnel came first. Unfortunately, he wasn’t given his due

For a former Defence Minister, even the most unlikely, George Fernandes was laid to rest without the traditional military honours due to him at the Lodi Road crematorium. He was no ordinary Defence Minister but one under whose watch several landmark defence and security events transpired: The Pokhran nuclear tests, Kargil war, terrorist attack on Parliament, culminating in the first full-scale war mobilisation called ‘Operation Parakram’ and the implementation of the Kargil Review Committee report. There is no job description of a Defence Minister but the one Fernandes wrote out, securing the widely-acknowledged accolade of being one of the best in performance and popularity.

So, it was surprising that the Adjutant General’s Branch at the Army Headquarters failed to do George Saab the honours he eminently deserved. I saw only two Army officers in uniform, both from the President’s Secretariat, some soldiers from 5/1 Gorkha Rifles, who accompanied his body in a wooden casket carried in a 10 tonne truck instead of a gun carriage and two Army buglers, who played the Last Post without the rise.

The function was quite chaotic, apparently managed by the Delhi Police. There was no show by Defence Minister Nirmala Sitharaman and other civilian and military dignitaries. Last year, India’s most decorated officer, Lt Gen ZC Bakshi — MVC, VrC, VSM, MacGregor Medal — the last of a bygone era passed away without even an appropriate wreath being laid on behalf of the Army. George Saab would not have let this omission passed uncondoned. He was not just the Defence Minister but also the only non-BJP member on the Cabinet Committee on Security. The BJP organised an awesome and poignant funeral with full military honours for late Prime Minister Atal Bihari Vajpayee but almost next to zero for George Saab, who deserved more.

The brown wooden casket, which brought Fernandes to his final full stop, reminded one of the Coffingate controversy which was turned into an alleged scam. Up till then, soldiers killed in action in Jammu and Kashmir and the North-East were cremated in the battle zone and their ashes delivered to the next of kin. He ordered the purchase of aluminium coffins from the US for the bodies of the deceased to be delivered to their homes. By this small gesture, he added dignity and respect to the sacrifice of soldiers. For Fernandes, it was always ‘Soldier First’, their welfare and well-being was his prime concern. He would love to share dal bhaat with the jawans and rarely, if at all, did he miss a chance to pick up their grievances.

This was best demonstrated by his fancy for the most difficult terrain on planet earth, Siachen. For him, this highest troop deployment became a pilgrimage to boost the morale of soldiers deployed there. He would especially order cakes from his hometown, Mangalore and carry them to Siachen every Christmas. He visited Siachen more than a dozen times, providing the personnel manning the forbidding heights with state-of-the-art equipment for survival. When bureaucrats in his Ministry delayed the provision of stores — like the snowmobiles for Siachen — he would pack them off to experience the pain of icy heights. Siachen became the benchmark for care and comfort of jawans.

He was extremely concerned about the mounting troop casualties. When the counter-insurgency grid got disturbed due to re-deployment of troops, resulting from Kargil and Pakistan-sponsored cross-border terrorism began to hurt, he explored some antidote strategies. The first was to declare that India would respond to cross-border terrorism by launching a limited conventional war under the nuclear threshold. The other option considered was clandestine: Employing reformed Kashmiri terrorists in a counter jihad but his heart was against  what he called immoral operations with a potential blowback. So, former Defence Minister Manohar Parrikar’s idea of using a terrorist to kill a terrorist had its votary at least a decade earlier.

No one could have imagined that the man in a crumpled kurta pyjama (which he washed himself) and one whose distaste for the military and its methods was well-known, would be steel firm in the pursuit of military values and discipline. When former Navy Chief, Admiral Vishnu Bhagwat, refused to comply with the directions of the Appointments Committee of the Cabinet because they were not in sync with the Navy Act, Fernandes signed his dismissal order. This was an unprecedented act in India’s brief military history. When former Army Chief, Gen VK Singh, dared to take his own Government to court following a string of shenanigans over his age row, Defence Minister AK Antony did not say a word to him. To me, though, he said: “He’s such a big man! The COAS…!”

Fernandes also dabbled in real-time secret intelligence operations to trap Arakan rebels. But his most serious and irreparable faux pas was calling China India’s Enemy No 1 and adding fuel to fire by leaking a letter that China was the reason for India’s nuclear tests. This diplomatic earthquake had to be subdued by the then Foreign Minister Jaswant Singh, who travelled to Beijing at the height of the Kargil war in what the Beijing media called: “Those who tie the knot have to untie it first.” This amounted to Singh retracting  Fernandes, naming China as the principal adversary for India and stating that China was not a threat to India. This admission by Singh untied the knot tied by Fernandes.

Fernandes had his share of scams: Coffingate, Tehelka, purchase of Barak missiles, the last of which implicated former Navy Chief Admiral Sushil Kumar too. On account of Tehelka, he had to step down while he was being investigated. Singh took over additional charge of defence and being an Army Major-turned politician, had a soft corner for service officers.

In one instance as Defence Minister, he recommended a Lieutenant Colonel for a one-year extension in his job as English language instructor in Laos, while as Foreign Minister, he rejected the same. Singh and Fernandes were thick as thieves which played a major role during Operation Parakram.

Fernandes was fluent in English, Hindi, Marathi, Konkani and even a smattering of Gorkhali he had learnt from his cook, Durga Bahadur.  George Saab left a deep imprint on the armed forces and the Ministry of Defence. At the funeral, his erstwhile assistant, Jaswal, recognised me and we both fondly remembered George Saab. He said Ashok, his PA, had died two years ago, adding: “But George Saab will live on.” Defence Minister Fernandes, like a soldier, will only fade away.