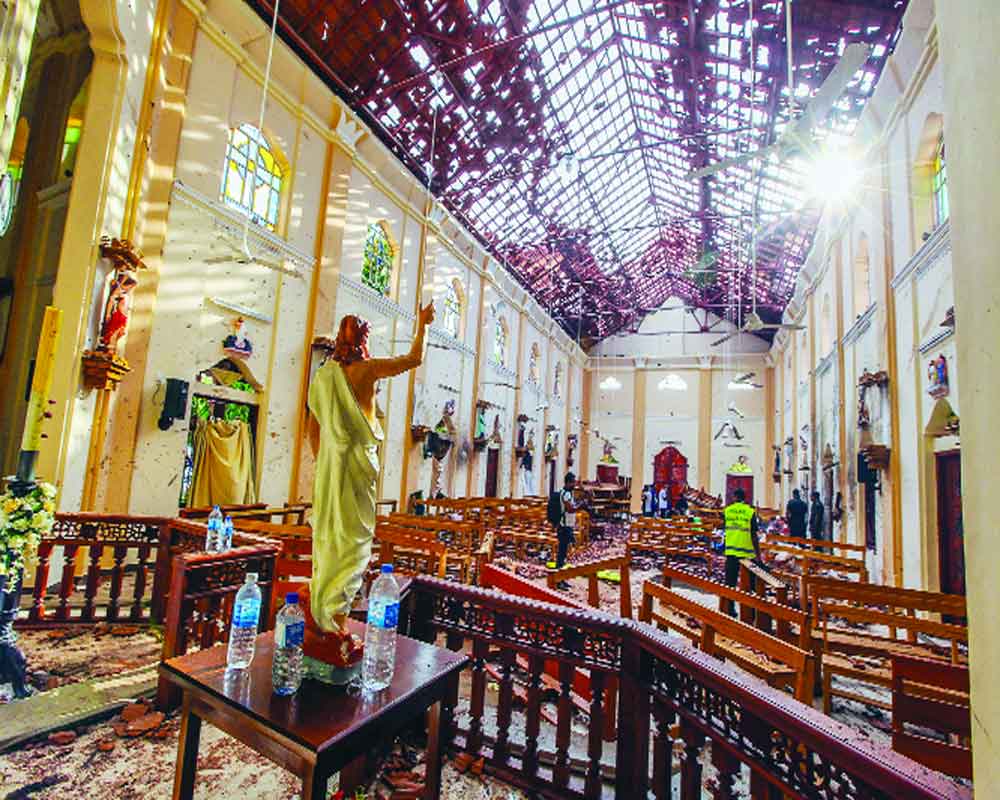 While the revival of the LTTE in the terrorist attacks in Sri Lanka has been ruled out, is a religious conflict in the offing? Or are multiple bombers the warning strikes?

Sadly, Sri Lanka earning the sobriquet of being the only country to comprehensively eradicate terrorism could survive for just 10 years. After battling several decades of guerrilla insurgency by a minority Tamil militant group, the Liberation Tigers of Tamil Eelam (LTTE), and vanquishing it in 2009, Sri Lanka was just returning to normalcy when the Easter Sunday attack on churches and high-end hotels across the island brought back its bloody and violent past. Racial tensions — between the minority Tamils and the majority Sinhalese Buddhists — leading to violence was common till 2009. But even at the height of that insurgency, no places of worship were attacked, only symbols of the Sri Lankan state. This is the first case of religious violence on an island that is worryingly close to a hub of fundamentalist Islamic activity, the Maldives.

By the Government’s own admission of an intelligence failure, at least seven to eight suicide bombers struck as far apart as Colombo, Negombo and Batticaloa, killing nearly 310 and wounding another 500 people. This is, perhaps, the most sophisticated and well-coordinated terrorist attack by well-trained and motivated, probably local Muslims, with elaborate support from an international organisation like the Islamic State (IS). So far, no group has claimed responsibility for the heinous attacks. The Government has blamed the recently formed Sri Lanka Tauheed Jamaat (SLTJ), which has been linked to the vandalisation of Buddhist statues, and declared a national emergency.

The modus operandi was like this: Terrorists checked into three hotels the night before — according to one report, with the same name — with sophisticated explosive jackets and triggered the devices at or around breakfast time the next day. Similarly, terrorists sneaked into churches and blew themselves up on Eastern Sunday mass, again, all timed at 8.45 am. This is clearly a case of thinking global, acting local. The potential bombers were motivated in Colombo and probably trained in the Maldives.

Sri Lanka has not witnessed a single terrorist attack since the eradication of the LTTE a decade ago. The Khalistani

terrorism in Punjab and Tamil Tiger terrorism in Sri Lanka are two unique instances in recent history of a state subduing terrorism.

The politically dysfunctional cohabitation of what was once a national unity Government of two national parties — Sri Lanka Freedom Party (SLFP) and United National Party (UNP) led by President Maithripala Sirisena and Prime Minister Ranil Wickremesinghe — is extracting its toll. Last year, the unity Government was rent apart in a Constitutional crisis when Sirisena dismissed Wickremesinghe and appointed the man he had defeated in the presidential election, Mahinda Rajapaksa as the Prime Minister. While the Supreme Court restored Wickremesinghe as the Prime Minister, the divide between the two leaders is unbridgeable.

Sirisena has kept the Defence Ministry, intelligence and law and order (internal security) under his charge and kept Wickremesinghe out of the loop. The senior-most military officer, the Chief of Defence Staff, Admiral Ravindra Wijegunaratne, under the CDS Act of Parliament 2009, reports to the President through the Secretary Defence, which is an administrative appointment.

In the past, the CDS used to brief the Prime Minister, too, and he used to attend NSC briefings, which evidently stopped after the Constitutional row. The intelligence failure was avoidable and has led to two parallel enquiries by the Prime Minister’s Office and the presidential secretariat.

On April 11, based on an international and Indian intelligence tip-off of April 4, the DIG, Police, warned that a Muslim organisation was planning to carry out terrorist attacks using suicide bombers. This was not shared with the Prime Minister’s Office. At a media briefing on Monday, the Government blamed the President (who was abroad on a private visit to India and Singapore) for not sharing the intelligence report and not appointing a care-taker in his absence.

The second round of feuding between the President and Prime Minister may have begun when the two should be seen to be acting in unison in this grave crisis. The guard was also let down: Ten years of not a single act of terrorism had induced complacency.

As someone who travels frequently to Sri Lanka, visits Colombo at least twice a year and as a former commander of the Indian Peace Keeping Force (IPKF), I have detected laxity in security norms at hotels and public places — all this when Colombo and its airport were in complete lockdown till 2009. After the war was won, the heart of Colombo, Galle Face Green, was freed and decked with a victory flag aflutter, courtesy the winds of the Indian Ocean.

The aggrieved minorities in Sri Lanka are the Tamils in the North and East; and the Muslims, mainly in East and South, including Colombo. The Muslims were at the receiving end at the hands of the Tamil Tigers in the East, having been expelled from the North. During IPKF’s time, relatively prosperous Muslim groups had begun to raise clandestinely armed militias. But the birth of radicalised Muslims is a new post-2013 phenomenon. The immediate triggers for the suicide attacks most likely are the unbridled attacks by Sinhalese extremists, the Bodu Bala Sena, starting sporadically in 2013 and peaking in 2018 against Muslim religious and economic interests, thus forcing the declaration of emergency.

In one of my conversations with a senior serving military officer in 2017, I asked what he considered the main security threat to the country. He said, “We have no external threat…our main concern is internal security.” He named the IS as the chief worry, adding: “We identified 32 Sri Lankans, who joined IS, one of whom was killed”. But in next door Maldives, there are at least 300 hardcore IS activists and there are 30,000 Maldivians living in Sri Lanka. Visa-free movement is permitted between both countries. So it would seem that BBS depredations could have instigated the local radical groups belonging to SLTJ to avenge their alleged state/politically supported attacks.

The current spate of suicide attacks will hurt the state. Tourism makes up about five per cent of the island’s $87 billion economy, supporting about one million jobs. It is also the third largest source of foreign currencies with India contributing a sizeable chunk: In 2018, 397,985 Indian tourists visited Sri Lanka as against 384,628 in 2017. But after the attacks, there has been a 41 per cent increase in cancellation of departure bookings for Sri Lanka from April 21 to 27 from India, with a 17 per cent drop in enquiring customers.

Let me stick my neck out. The revival of the LTTE has been ruled out. But is a religious conflict in the offing? Or are multiple bombers the warning strikes?