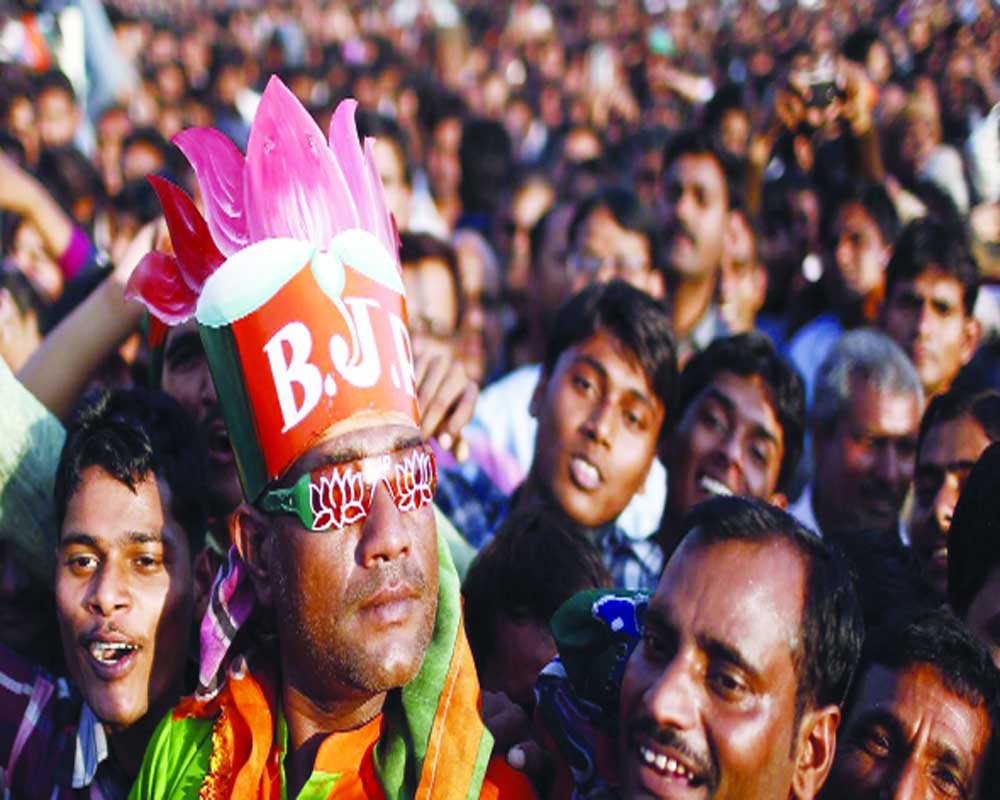 The BJP seems to have adapted some of the worst tenets of Right-wingers and foregone some of the better ones. Its very idea of nationalism is flawed

The terms “Right-wing” and “Left-wing” are now a recurrent part of our discourse. They are used as labels for “conservatives” and “liberals” and collectively those who have a view on both cultural and economic practices of a State. Originally, the two terms were coined during the French Revolution when, in the summer of 1789, members of the French National Assembly met to begin drafting a new Constitution. Delegates primarily debated on the kind of authority King Louis XVI should have. The faction that supported the monarchy and who were more conservative, the aristocratic section, seated themselves on the right of the room while other “anti-royal” revolutionaries seated themselves to the left.

The difference between the Right and the Left wing is no longer about debating the role of the monarchy. However, stemming from this accidental birth, the principles on what essentially constitutes “right” and “left” wing have become more established over time. Right-wingers or conservatives are typically characterised with a social policy of macho nationalism with a strong emphasis on things like limiting immigration. In terms of economic policy, the Right-wing is typically characterised as one which focusses on minimum governance, where the role of the State is less of a grandfather and where businesses are allowed to channel and give effect to the demands of the economy.

On the other hand, in terms of social policy, the Left-wing is characterised as a proponent of minority rights, more economic equality and plays the larger role of the State to step in for those who need them. This is still a rather relaxed characterisation but I hope it captures the essence of the two sides.

These terms are often liberally used to describe parties in our country. To cite an example, the Bharatiya Janata Party (BJP) is often identified as the Right-wing party and the Congress as more Left of Centre. Such simple classification, however, does injustice to the complex political party system and ethos in India. The BJP loves to portray itself as India’s Right-wing or conservative option. It furthers this idea through statements to the media. For example, in 2014, Prime Minister Narendra Modi declared that the BJP believes in “minimum Government, maximum governance” and will execute these values. These statements got the response the party desired as it tried to establish and strengthen its hold among middle class urban businessmen tired of the overbearing role of the State.

While the BJP identified the right pain point — that the State often turns out to be an inhibitor of entrepreneurial spirit — the past five years have shown just how disingenuous the party has been in tackling the actual problems of an overbearing Government. Instead, it has taken it one step further. From a social point of view, the role of “State” in our everyday lives could not be higher. Today, it directly (through laws) tells its people what they can eat, where they can go, how to dress and who to marry, among other things. If this is not done directly, it is done indirectly through instruments of the State like the police or through more informal means by allowing non-state bodies to get away for attacking people who dress a certain way or eat certain things.

This is hardly the brand of a “Right-wing party.” On the aspect of macho nationalism, the BJP is an extreme form of the Right-wing. It would be acceptable, even encouraged, if it advocated a strong India where its people are steadfast about their beliefs and there is pride among Indians about the country. However, that is not the version of nationalism we see today.

Instead, what we have is a chest-thumping form of nationalism. One that is so loud that one cannot even hear a murmur of dissent. This form of macho nationalism displays a strong outer core but at the same time betrays a weak inner belief, one that is scared of editorials and of protest. This form of nationalism is less about building a stronger India and more about managing the Government’s perception. In its social policy, the BJP, therefore, appears to have borrowed the worst parts of the Right-wing and foregone some of the better ones.

On the economic front, too, it appears we have been lied to. When the Prime Minister said that he believed in “maximum governance and minimum Government”, Indians assumed that this meant that the BJP would reduce the retarding effect of bureaucracy and Indian laws on a doe-eyed entrepreneur. However, this has not been the case.

Instead, the notion that the business and entrepreneurial community would gain from a “minimum Government” has been shattered. One had hoped the State would have a lesser role to play in terms of approvals or tax compliances. Instead, what we have been given is a scarier monster where direct tax authorities harass tax-paying citizens and exercise their wide berth of powers without any checks and balances.

Similarly, in terms of indirect taxes, the way in which the Goods and Services Tax (GST) was implemented has made it more intrusive than ever. The effect of this can be gauged by the comments made by many businessmen, who previously supported the BJP Government but have now come to realise that things are much worse under its stewardship.

However, this is exactly what has happened. In a recently published article in The Mint, the writer argued how through demonetisation and a shoddy GST programme, the Government essentially waged a war on the informal sector even though more than 30 per cent of the economy is completely informal and over two-third of the workforce is employed in informal enterprises.

Therefore, this has made the “BJP’s war on informality essentially a war on the economy.” The ironic bit is that the current version of the BJP, with its Right-wing social policies and far Left economic policies, is closer to a communist State (like China in the 1980s) and fails to neither be a good socialist State that takes care of those who cannot take care of themselves, nor a conservative role model with more free markets and minimum interference. Maximum governance, Minimum Government? You must be having a laugh.

(The writer is former president of Jharkhand Pradesh Congress Committee)