Why people are going Right

Why people are going Right 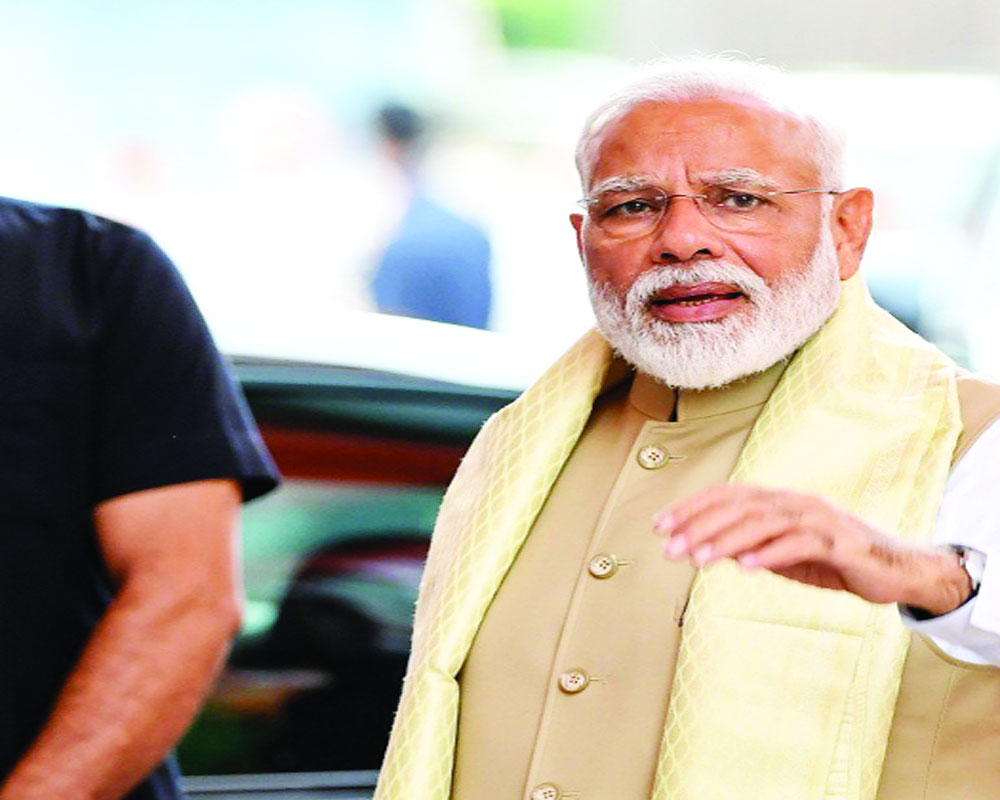 In his first speech after a mammoth electoral victory, Prime Minister Narendra Modi had summarised what could best define not just India’s but the axis shift in world politics. “For years the Left had its ideology but we translated that into reality,” he said with conviction. Justifiably so because he proved a theorem that is being borne out by the rest of the world, where the right-wing is drawing strength from all sections of people — hordes of ordinary people to be precise — to becoming a mainstream entity than just being a fringe benefit or aberration, depending on its tolerance or virulence. So the narrative is not about right-wing dominance but about right-wing populism.

In that sense, the Modi phenomenon is in continuity with a global pattern really, one that is sweeping the Far East, through the European continent and lunging across the Atlantic. If Donald Trump and Xi Jinping are the twin polarities in the West and East, then there are several in between other than Modi. Consider the frenetic rise of Brazil’s new far-Right leader Jair Bolsonaro, who crested a series of social movements that gave him the pulse of the people. Hungarian Prime Minister Viktor Orban and Turkish president Recep Erdogan have overturned the Left-inspired liberalism and made it their own. In Thailand, the compliance of conservatives is the reason for the continuity of military rule.

So what is the reason for this socio-psychological behaviour profile in a post-globalised world? It would be easy enough to dismiss it as born of hopelessness and desolation, climbing out of a similar trough seen between two World Wars whose belly fired up fascism and gave us a Hitler. He   successfully built “otherness” as a reason for  Germany’s ills before suggesting his outrageous solutions. But we are not in the Great Depression or a World War but in a globalised world which was meant to equalise and share resources. Or at least attempt to do so. What has happened in the process of an increasingly flat world of give and take, in no small part aided by the massive empowerment courtesy digitisation, is that it has led to total deconstruction of traditional social-economic structures. In its time, globalisation was a dream concept advocating free trade across borders and by extension an exchange in services, capital and ideas. All sounded good. But down the years, as industries shifted due to outsourcing from the rich to cheap-labour economies, leaving in their trail job losses in affected countries, and as home manufacturing got hit by cheap imports, like it has in India, too, the anxieties about losing identities, resources and self-worth began gaining traction. Worse, the process quickly mutated to economic imperialism and colonisation where the dominant manufacturer countries like China quickly created debt economies with hugely imbalanced deficits. In many countries, the entry of multi-nationals meant loss of land for lavish units and sweatshop conditions for local labour. The second biggest problem that arose from free movement of skilled labour was immigration, an influx that worked when subservient but not when it claimed equal stakeholdership in the host country. So if supposedly the most apolitical country like Sweden is becoming intolerant of immigrants, leave aside the crisis fuelled by Brexit, then anti-globalisation is a bigger sentiment and the neo-age protectionism advocated by Trump its mere expression. Research has shown that in the US, the regions hardest hit by globalisation have become more politically extreme.

Besides, human psychology is such that while you want to flow with the world, share the same living indices, you still crave for primacy in your manageable unit, your controllable home and the community. This rationale is tied by cultural factors, religious beliefs and a national identity, which while acknowledging the presence of all kinds of otherness, is deeply distrustful of it. It is this undercurrent, which was dumbed down by liberals and free world economists, that has bubbled up now, forcing a review of existing theories and paradigms. This deep discontent is also the reason why traditional civil liberties, of the kind that is supportive of human rights, protection of minorities and progressive and democratic values, are under attack. Simply because they do not acknowledge the crisis of “otherness,” somebody else stealing your job, somebody else taking over the economy, somebody else denying what could be due to you, somebody benefitting from doles and, therefore pushing you to poverty. In short, the classic psychological “blame game” that lets you assign victimhood to yourself. It is this idea of exclusionary torture that doesn’t fit in with the traditional idea of Left liberalism, which, as Russian President Putin and Italy’s Five Star movement have shown, has hybridised to remain relevant. This reactionary wave is the bedrock of the radical right. Seen through this prism, Modi’s “Make in India,” the projection of an enemy snapping at our borders or the one within as entitled minority and caste votebanks, make acceptable sense.

Of course, the Left, which has been reduced to a rump over a longer period of time, made the job easier. Its version of trade unionism dwindled since the 1990s and has since pejoratively been seen as a deterrent to economic activity than as a guarantor of local jobs that the Right has successfully marketed. The Singur movement, a watershed marker in the decimation of the Left, which catapulted Mamata Banerjee in Bengal, showed that for a party which initiated land reforms, it could be blatantly smug about land acquisitions too.

Most importantly, the class interests that it so abhorred were solidified by its own internecine machinery of outsourced implementers. In relying on its ground machinery of people, who might not have been ideologically committed but were communicating with the grassroots, the Left lost its empathy and the right to leadership. Which is why a slum-born Mamata seemed more credible at the time just as the tea-seller Modi, who is born of the silent suffering kind and is more local than global,  is now winning hearts.

A World Values Survey shows that people are increasingly disaffected with their government and are more willing to support authoritarian leaders, thinking that their robustness will give them a voice that civil society, so far an ivory tower of privileged and impervious intelligentsia, has denied them. Ironically, it is also the children of globalisation, the millennials — the generation that is disconnected from historicity or hasn’t lived through catastrophic world events really and whose reality is shaped by what is floating on the internet brand of unpoliced democracy — who are seeking another kind of destiny, a dream crafted on their terms than the one bequeathed.

They also haven’t felt the impact of authoritarianism unlike those in transitional generations. As they don’t have the same negative experience of authoritarian rule and are complacent about democracy and democratic stability, they are naturally inclined to any change of status quo, especially one that is iconised by social media cults. All authoritarian leaders, Modi included, are harnessing them as their neo Army and leading them to a promised land at a time when the world seems to be running out of promises in the first place.