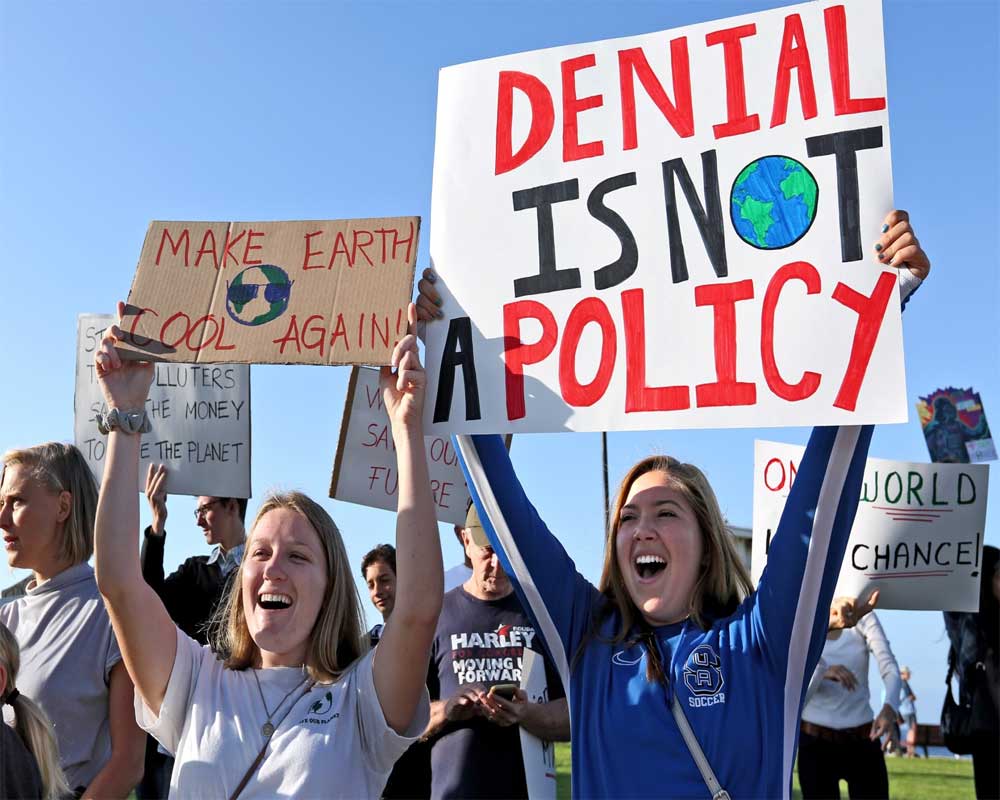 India and Sweden are co-leading an industry transition track under the high-level UN Climate Action Summit, hosted by Secretary-General Antonio Guterres, that will create stronger commitments from sectors such as steel and cement to achieving net-zero emissions by 2050.

With a view to boosting ambition and accelerating action to implement the Paris Agreement, the Climate Action Summit will focus on nine interdependent tracks, which will be led by 19 countries in total and supported by international organisations.

"The collaboration between India, Sweden, the World Economic Forum and many others to kick this process off is leadership by example and I look forward to seeing how this develops over the coming years," Amina Mohammed, UN Deputy Secretary General, said while addressing the 'Setting the context for the industry transition programme' for the Climate Action Summit here Saturday.

India and Sweden are co-leading the Industry Transition track, which will focus on creating stronger commitments from the "hard-to-abate sectors" such as steel, cement and build on positive momentum in areas such as shipping. It is supported by the World Economic Forum (WEF).

Mohammed recalled her recent visit to India for the 14th Conference of Parties to the United Nations Convention to Combat Desertification and said she saw an "amazing demonstration of what is happening at the sub-national level that is being galvanised by leadership at the helm.

"That again is leadership for things that are happening in very big countries that face huge challenges, when you talk about the numbers, the breadth and the depth of ambition that has to be had."

She said that climate crisis is the "defining challenge of our generation" and nations are running out of time to tackle it.

"The next decade is crucial for changing the emissions curve. We simply have to meet the goals of the Paris Agreement...That means cutting greenhouse emissions by 45 per cent by 2030; achieving carbon neutrality by 2050; and limiting temperature rise to 1.5 degrees by the end of the century," she said.

Mohammed noted that energy, industry, infrastructure, agriculture and food systems need to become low-carbon and climate-resilient and while there is more and more promise in the area of energy transition, in particular the development of renewable energy, the needed transition is not coming fast enough.

"That is why we need front-runners in the industry sector, particularly in cement, steel, chemicals and heavy-duty transport. These sectors annually emit around 10 Gigatons of CO2 -- some 30 per cent of global emissions. They are harder-to-abate sectors that need significant help to transition because the solutions are tougher than for most sectors," she said.

Voicing concern that the cement and steel industries remain highly inefficient, she said such sectors can be developed in a low-emission manner and steel can be produced without the utilization of coking coal.

"It is our responsibility to make sure these solutions move beyond pilots, and that they can reach the scale needed to make a difference. This is why it is so important today to see countries like India stepping upfront because there is no demonstration of scale like there would be in countries like India," she said, adding that the challenge is enormous, but "so are our capabilities when we act together."

Sweden's Deputy Prime Minister and Minister for Environment and Climate Isabella Lovin said it is a "true pleasure" to take on the task of the industry transition track together with India.

"We already have a joint innovation partnership where businesses from the two countries work together on some of our major challenges including climate," she said, adding that this is an example that a "small but hi-tech country can work together with one of the largest countries facing a major industrial and economic development."

Lovin said that building on their work in the industry track, Sweden and India together with the WEF are now preparing for the next steps and called on other nations and businesses with similar ambitions to join the two countries.

"The work we have conducted in the industry track together with India and the WEF...Clearly show that transitions are economically, technically feasible in all parts of the world given the right conditions," she said.

Among the expected outcome from the track is announcements from at least 6-7 CEOs from heavy industry and transport (i.E. Chemicals, cement, steel, aluminium, trucking, shipping, aviation), across different geographies, making commitments to net-zero emissions by 2050 with a clear plan on how this will be achieved and a clear near-term deliverable.