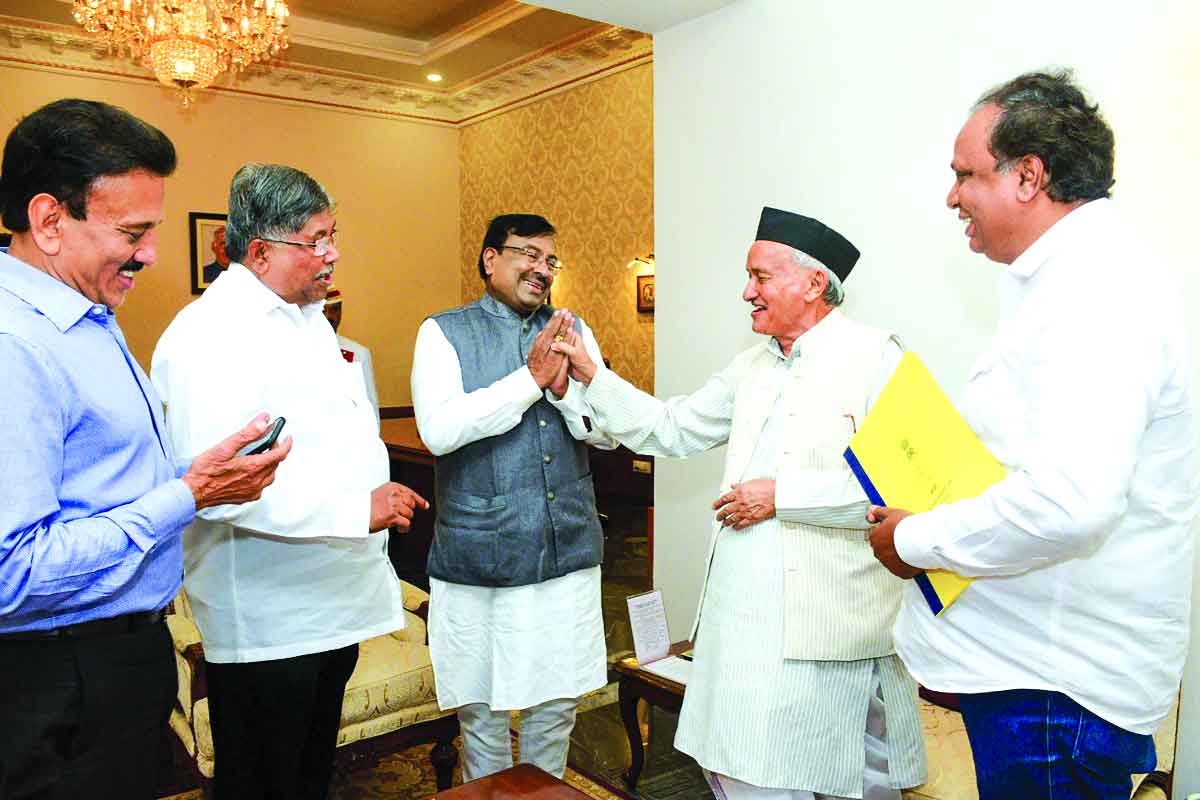 BJP meets Guv as State stares at Constitutional crisis; Shiv Sena rounds up its MLAs at a hotel

With just 24 hours to go for the expiry of the current State Assembly’s term, Maharashtra on Thursday evening appeared to be heading towards a Constitutional crisis as the single largest party — BJP — suo motu sought more time from Governor Bhagat Singh Koshyari to stake claim to form a Government in the State, thus forcing the latter to explore ways to deal with the emerging political situation.

Meanwhile, after a meeting with party chief Uddhav Thackeray, a Shiv Sena MLA announced that all Sena MLAs will stay at the Hotel Rangsharda in Mumbai till the formation of a Government in Maharashtra.

Having failed to hammer out power-sharing deal with its pre-poll ally Shiv Sena mainly over the issue of sharing the Chief Minister’s post on a rotational basis and equal sharing of Ministries, a BJP delegation, led by State party president Chandrakant Patil and Sudhir Mungantiwar, met the Governor and discussed the relevant Constitutional provisions what would help provide a “stable” Government.

Since Mungantiwar had clearly stated ahead of his party leaders’ meeting with the Governor that the party would not attempt to form a “minority” Government, it is unlikely that the BJP, in the absence of support from the Shiv Sena, will stake a claim to form a Government before the expiry of the term of the current Assembly which ends at the midnight of November 8. (The BJP is at least 25 MLAs short of a majority of 145 MLAs in the 288-member Assembly).

That being the case, will the Governor — before the expiry of the current Assembly’s term — use his discretion and invite the BJP’s newly elected Legislature Party leader Devendra Fadnavis to form the Government and ask the latter to prove his Government’s majority within a stipulated time frame?

Will the BJP — in the absence of support from the Shiv Sena — accept the Governor’s invitation to form the Government?

In effect, it remains to be as what kind of steps the Governor will take before and after the expiry of the term of the current Assembly.

It is only after the Governor exhausts all his options before him to ensure the formation of a Government that he will decide to the place the Maharashtra Assembly under suspended animation. Even for invoking the President’s Rule in the State, the Governor will have to submit a report to the Rashtrapati Bhavan giving details of the political stalemate in the State that has impeded the formation of a Government.

After the BJP delegation met him, the Governor held consultations with the State’s Advocate General Ashutosh Kumbhakoni on the Constitutional issues relating to the delay in the formation of a new Government.

Informed sources in Raj Bhavan said in the evening that the Governor — who has hitherto not intervened in the situation — might take some steps on Friday on the Government formation front.

On the political front, the Shiv Sena reiterated that it would not join the Government till such time its senior ally BJP did not agree to give it the Chief Minister’s post on a rotational basis.

At a meeting of his party MLAs held at his Bandra residence Matoshri, Shiv Sena president Uddhav Thackeray said that while his party was on its own not in favour of breaking the alliance with the BJP, while it was for his party’s senior ally to take the call. “I don’t want to break the saffron alliance on my own. It is for the BJP to take a call in the matter. We are not asking the BJP much. We are just telling them to implement the 50:50 power sharing that had been decided before the Lok Sabha polls,” Uddhav told his party MLAs.

After they stepped out of the meeting and headed to the Rangsharada hotel where they have been put up till the formation of a Government in the State, most of the MLAs said that they would abide by whatever decision the party president took in the overall interest of the State.

The Shiv Sena, which has hitherto been vacillating on the issue of walking out of the saffron alliance, will have to take a decision on continuing or otherwise in the alliance. “Unless the Shiv Sena comes out of the saffron alliance and approaches us for support, we (Congress and NCP) will not consider extending our support to it to form the Government,” a senior Congress leader said.

NCP president Sharad Pawar, who has hitherto been maintaining that the NCP and Congress had been given a mandate by the people to sit in the Opposition, has actually not foreclosed the option of extending support to the Shiv Sena.

Pawar, who was away at Karad in western Maharashtra, cut short his onward journey to Konkan region and is heading straight to Mumbai. “Pawar may either meet or speak to AICC president Sonia Gandhi on the issue of extending support to the Shiv Sena,” a senior NCP leader said.

Meanwhile, former Chief Minister and senior Congress leader Prithviraj Chavan said if no political party staked claim for formation of a Government in the State by tomorrow, there would be constitutional crisis and the Governor would have to recommend the President’s Rule in the State.

Replying to a question, Chavan said he had spoken to NCP president Sharad Pawar with whom he shared a public platform at Karad, on the issue. Meanwhile, the Congress is under intense pressure from a large section of the Congress MLAs to extend support to the Shiv Sena, to keep the BJP away from power.

Some 30 Congress MLAs shot off a letter to Sonia Gandhi in this regard on Wednesday.

Senior Congress and former Chief Minister Ashok Chavan and Rajya Sabha member Hussian Dalwai are also favouring the move to support the Shiv Sena to keep the BJP away from power.