Cong did nothing to stop loot: Modi

Cong did nothing to stop loot: Modi 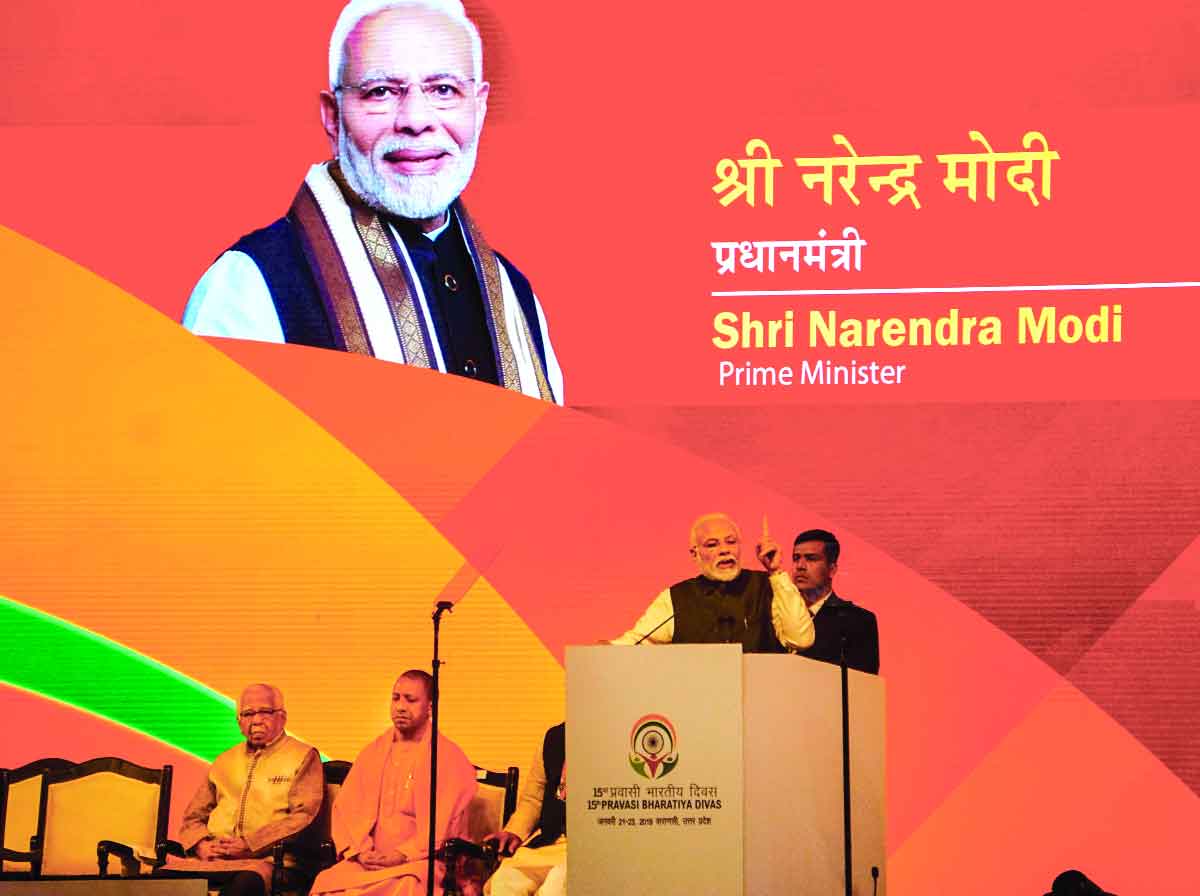 Prime Minister Narendra Modi on Tuesday referred to former premier Rajiv Gandhi’s remarks on corruption in the country to attack the Congress, saying the party that ruled for years did nothing to stop the “loot”, while his Government put an end to it and transferred about Rs 5,80,000 crore directly to the people under various schemes.

Without naming Rajiv, he alluded to the former Prime Minister’s remarks that only 15 paise of Rs 1 reach the masses and said the Congress Governments over the years did nothing to stop the “leakage”.

Addressing NRIs and Indian-origin people at the inauguration of the 15th Pravasi Bharatiya Divas convention in his parliamentary constituency of Varanasi in Uttar Pradesh, Modi described the diaspora as India’s brand ambassadors and said they were the symbols of the country’s capabilities.

The Government has changed the perception that India cannot change, he said in the presence of Mauritian Prime Minister Pravind Jugnauth, External Affairs Minister Sushma Swaraj, Minister of State for External  Affairs VK Singh and UP Governor Ram Naik among others. Chief Ministers of UP, Haryana and Uttarakhand — Yogi Adityanath, Manohar Lal Khattar and Trivendra Singh Rawat — attended the meet.

Modi said India’s contribution was being recognised at the international level, especially its role with regard to environment.

Taking a swipe at the Congress over the issue of corruption, Modi said it got to know about the disease, acknowledged the disease, but neither thought about it, nor did anything in the direction of curing the ailment.

“Many people here would have heard what a former Prime Minister had said about corruption. He had said the money that the Central Government sends, only 15 per cent of that reaches the people. If one rupee is send from Delhi, only 15 paise reaches the villages, 85 paise disappear,” Modi said, alluding to Rajiv’s remarks.

“The party that ruled the country for so many years had given the system to the country, a truth that was accepted by the then Prime Minister. But what is regrettable is that later in its rule of 10-15 years, there was no effort made to end this loot and leakage,” Modi said.

The country’s middle class kept giving tax honestly and this “loot” of 85 per cent also continued, he said.

“I also want to tell you today’s truth as well. We used technology to end this loot of 85 per cent completely,” he said.

“In the last four-and-a-half years about Rs 5,80,000 crore, about USD 80 billion, our Government, through various schemes, has directly given to the people, transferring it in their bank accounts,” the Prime Minister said.

The money has been given out for various purposes such as for a home, for education, for scholarship, for gas cylinder, and to other such ends, Modi said.

“Now just consider that if the country was being run through the old system, then even today from this 5,80,000 crore, about 4,50,000 crore would have disappeared or leaked. If we would not have brought a change in the system then this amount would have been looted like the former Prime Minister had accepted...,” Modi said.

This corrective measure could have been taken earlier also, but there was no intention or will, he said.

Modi’s all-out attack on the Congress comes at a time the Opposition has been alleging corruption in the Rafale fighter aircraft deal.

The Prime Minister said his Government also identified about seven crore fake people who existed only on paper, taking advantage of Government schemes.

“Just think about it, more than the population of many countries such as Britain, France, Italy, we had people who just existed on paper to take advantage of Government schemes,” he said.

Mauritian Premier chief guest Jugnauth, in his keynote address at the event, announced that Mauritius will host a Bhagwad Gita Mahotsav in partnership with the Haryana Government next month and also for the first time organise a Bhojpuri Festival next year.

External Affairs Minister Swaraj, in her remarks at the inauguration, said the Pravasi Bhartiya Divas had lost its sheen in the years 2004-14, alluding to the UPA rule.

Prime Minister Modi also gave a way the awards to the winners of the ‘Bharat ko Janiye’ quiz competition in which about 40,000 young Indian diaspora members participated.

He also launched a Pravasi Teerth Darshan Yojana under which a group of Indian diaspora will be taken to religious places across the country.

Modi said the diaspora is equally important in the Government’s resolve for a “New India”. He added that their safety is also the Government’s concern and cited how it took upon the challenge of evacuating more than 2 lakh Indians stranded in conflict zones.

Speaking about the welfare of Indians overseas, Modi said passport and visa rules have been simplified and e-visa had made it much easier for them to travel. All Pravasi Bharatiyas are now being linked to Passport Sewa and efforts are on to issue chip-based e-passport, he said.

Modi also said India is in a position to lead the world on many issues and cited the International Solar Alliance as an example.

“Through this, we want to take the world towards One World, One Sun, One Grid,” he said.

“Today India is a fast growing economic power in the world, and even in sports we have moved towards becoming a big power,” he said.

External Affairs Ministry official Dnyaneshwar Mulay, at a briefing, said this was the “largest and the grandest” PBD since its inception in 2003.

A total of 7,228 registrations were done for this year’s PBD from over 92 countries, he said.

The theme of this year’s convention is ‘Role of Indian diaspora in building New India’.