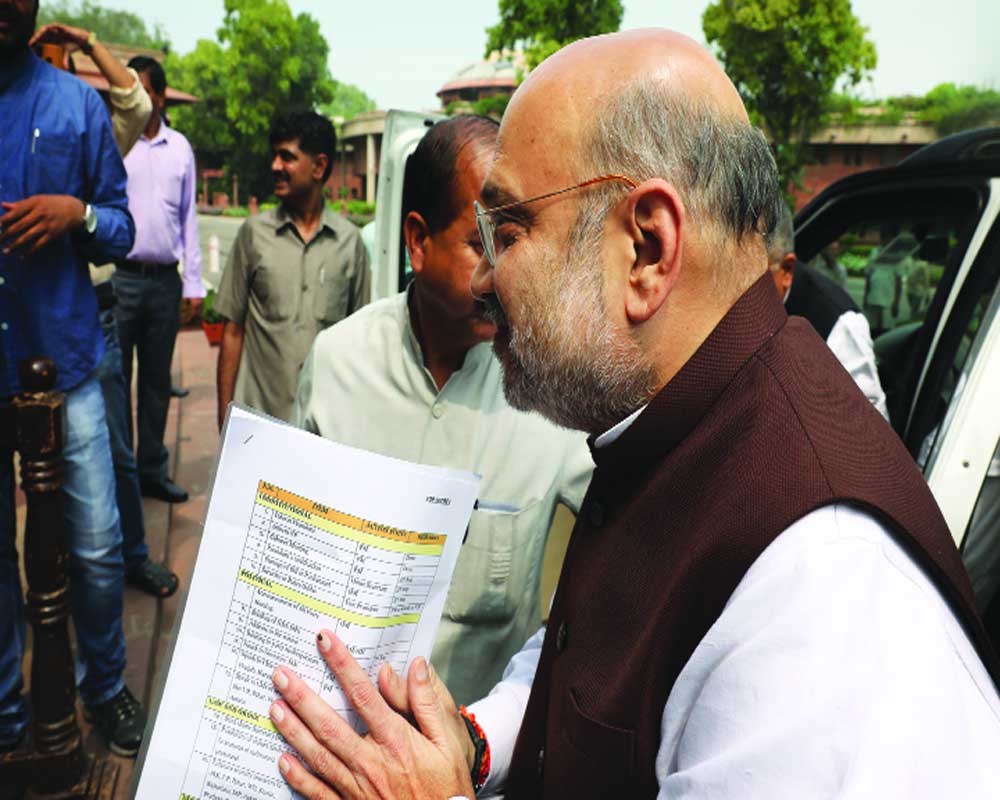 A triumphant Home Minister Amit Shah on Monday termed the Modi Government’s landmark decision to scrap Article 370 of the Indian Constitution that gave special status to Jammu & Kashmir as “historical” saying it came in the way of integration of the State into India.

While tabling the resolution in the Rajya Sabha, Shah said Article 370 was introduced in the Constitution on October 17, 1949, and almost 70-year-long provision led to lack of development, corruption and loot by “three families’ for so long.

Shah said decision to abrogate Article 370 ensures that there will be no “do nishan, do samvidhan” (two flags, two Constitutions) in Jammu & Kashmir. “This decision is a tribute to all the patriots who made the supreme sacrifice for a united India. Congratulations to the entire nation. Today, Modi Govt has corrected a long overdue historic wrong,” Shah tweeted later congratulating Modi for “his unwavering commitment towards ensuring unity and integrity of our motherland”.

The revocation comes against the backdrop of Shah asserting during the election rallies before the recent Lok Sabha elections that if his party retains power, the long standing demand for repealing Article 370 will be fulfilled.

Shah, who received a standing ovation from his party colleagues when he entered the House minutes before proceedings in the Rajya Sabha commenced, termed the move as “historical”.

In his half an hour reply, Shah highlighted the “monumental injustices” of the past and presented the Government’s vision for the people of J&K in the Rajya Sabha in the presence of the PM.

Countering the Congress’ contention on the Bill, Shah said Jammu & Kashmir acceded to India on October 27, 1947 but Article 370 came in 1949.  “It is not true that Jammu & Kashmir joined India because of Article 370,” he said.  Article 370 was always temporary and past Governments did not remove it because of lack of political will and vote bank politics, he said.

Shah said decision to abrogate Article 370 ensures that there will be no “do nishan, do samvidhan” (two flags, two Constitutions) in Jammu & Kashmir. “This decision is a tribute to all the patriots who made the supreme sacrifice for a united India. Congratulations to the entire nation. Today, Modi govt has corrected a long overdue historic wrong,” Shah tweeted later congratulating Modi for “his unwavering commitment towards ensuring unity and integrity of our motherland”.

Urging all parties, including Congress to support the Bill, Shah said the historic decision will usher in a new dawn of peace and development in Jammu & Kashmir and the Ladakh region.

He said the UT in Ladakh will have no legislature (like Chandigarh) while the other UT of Jammu & Kashmir will have a legislature as in case of Delhi and Puducherry.

Earlier, Shah informed the Upper House in the morning that President Ram Nath Kovind has signed the official notification abrogating Article 370.  He also moved a separate Bill to bifurcate the State.

The Home Minister’s announcement evoked strong protests from the Opposition with leaders of Congress, TMC, DMK, AAP, NCP and Left raising slogans and storming the well of the House. They later squatted in the Well and continued with their protest.

However, some regional parties like BSP, BJD, TRS and AIADMK extended full support to the resolution and the bill while NDA constituent JD (U) walked out.

Shah said the President has signed the official notification abrogating Article 370 and since the Jammu & Kashmir constituent Assembly no longer exists and the State Assembly stands dissolved, the powers of the Assembly wrest with both Houses of Parliament.

In an effort to dispel doubts raised by some Opposition MPs about the need for a Constitutional amendment to repeal Article 370, Shah said it is provisional and can be abolished by the President’s notification as per Article 370(3).

Reading out provisions of Article 370 (3), the Home Minister said there are provisions within that State that Article 370 shall cease to be operative or can be amended and the President has the right to issue such a notification or constitutional order.

“We are adopting the same path as adopted by the Congress in 1952 and 1962 by amending the provisions of Article 370 the same way through a notification,” Shah told the House.  He also said, “there are no merits in the Opposition stand and they are opposing it only to do politics and are creating ruckus inside the House.”

Shah in his resolution said, “The President, on the recommendation of Parliament, is pleased to declare that, as from August 5, 2019, all clauses of the said Article 370 shall cease to be operative except clause (1) thereof.  All provisions of this Constitution, as amended from time to time, without any modifications or exceptions, shall apply to the State of Jammu & Kashmir.”

As regards the Reservation Bill, Shah said it will help provide economically weaker sections 10 per cent reservation in educational institutions and Government jobs. This reservation will be besides existing reservation for SC, ST and OBC. Noting that in past 38 times, Bills have been circulated and passed on the same day, he said this will be “null and void” after the resolution for abolition of Article 370 is approved.

Shah was hailed by Modi for accurately highlighting  the “monumental injustices” of the past and presenting the government’s vision for the people of Jammu & Kashmir in the Rajya Sabha.

Sharing Shah’s speech on his Twitter handle, Modi said the views put forth by the Home Minister were “extensive and insightful.”

“It accurately highlighted the monumental injustices of the past and coherently presented our vision for the sisters and brothers of J&K. Do hear,” the PM tweeted.

BSP, AAP, BJD, Jagan Mohan Reddy’s YSRCP, Bodoland People’s Front (BDF), TRS and TDP all supported the J&K Reorganisation Bill that paved the formation of the Union Territory of Ladakh without legislature and a separate one for Jammu & Kashmir with the legislature.

Besides NDA allies Shiv Sena AIADMK and SAD also backed the Government move amid a massive uproar by the Opposition but its major alliance partner Nitish Kumar led JD (U) staged a walkout.

Supporting the cause of the Bill, Satish Chandra Mishra reasoned the BSP stand saying modification of Article 370 will ensure reservation to Muslims and other minorities in the Valley. “Our party gives complete support. We want that the Bill be passed. Our party is not expressing any opposition to Article 370 Bill and the other Bill,” Mishra said.

The AAP, which opposed the Bill in Rajya Sabha, however, later support the Bill during voting after its leader Arvind Kejriwal tweeted welcoming the decisions on Jammu & Kashmir. AAP has three members in the Rajya Sabha and request of Congress and TMC to oppose was not considered by AAP.

Both the regional parties from Andhra Pradesh - the TDP and YSRCP - supported the BJP Government’s move to revoke Article 370 and Article 35A. The TDP was part of the Modi’s last Government and joined Congress led Opposition during the General Elections 2019.