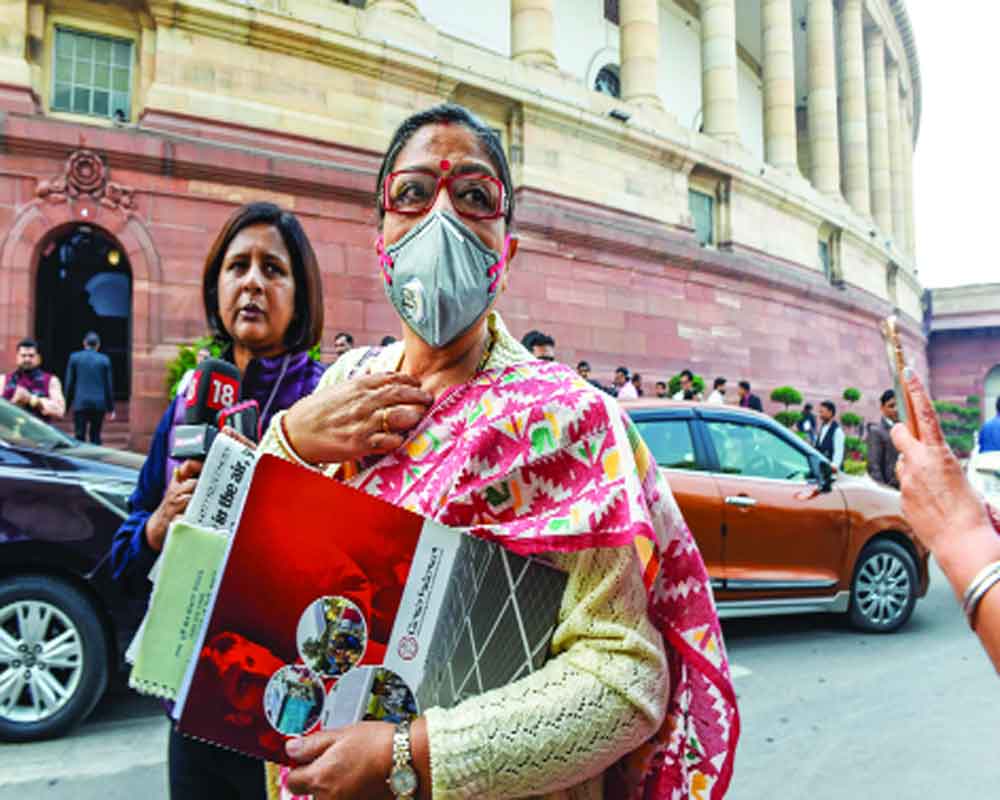 A debate on Delhi’s alarming pollution level kicked off in the Lok Sabha on Tuesday on the second day of the Winter Session with Congress MP Manish Tewari suggesting a standing committee on pollution and climate change.

Trinamool Congress’ (TMC) Kakoli Ghosh Dastidar, who wore a mask during her speech in the Lok Sabha, called for a Swachchh Hawa Mission. She said Delhi is staring at mass asphyxia.

Many MPs reasoned that it is was unfair to blame only farmers for stubble burning, while keeping a blind eye to major polluters like industry, vehicles, civil constructions in Delhi. They criticised the Delhi Government for its failure to provide clean water.

Initiating the debate, Tewari pointed out how Beijing recovered from the hazardous pollution by curbing industrial and thermal wastes. He urged the Centre and the Delhi Government to resolve the issue with integrated actions.

Tewari said stubble burning is not a major pollutant in Delhi and adjoining areas, hence small farmers should not alone be blamed for the present situation in Delhi.

Participating in a discussion on “pollution and climate change”, BJP MP from West Delhi Pravesh Verma slammed the AAP Government for passing the buck to neighbouring States where stubble burning is an annual phenomenon around this time every year.

The BJP MP alleged that the AAP Government had spent `70 crore on publicising the odd-even road rationing scheme but did not take steps to increase the number of public buses. People are using personal vehicles due to inadequate and poor public transport facilities in Delhi, he said.

He alleged `600 crore was spent by the Delhi Government on advertisements but little was done to curb pollution.

Earlier Delhi Chief Minister Arvind Kejriwal used to cough, but now the entire city and members of Parliament are coughing, he said sarcastically.

Verma claimed the pollution level in Delhi has has reached a saturation point point and that is why many residents want to leave the city. He questioned the usefulness of the purchase of 50 lakh masks by the City Government.

Verma alleged that by blaming villagers for pollution, Kejriwal was only widening the urban-rural divide.

The Speaker reminded Verma not to take the name of Kejriwal, but he went on attacking the Delhi CM.

Verma also called upon the MPs to donate `2 crore from their Members of Parliament Local Area Development (MPLAD) fund for setting up pollution control towers in Delhi as they spend over 200 days of the year in the city.

Pinaki Misra (BJD) too said stubble burning is not a major contributor to pollution in Delhi and the farmers should not be vilified. However, he suggested utilising stubble for bio gas to incentivise farmers against burning it. Misra urged for combined efforts of the Centre and States in curbing the rising pollution levels of water and air.

Meanwhile, the Parliamentary Committee on air pollution in Delhi is scheduled to meet on Wednesday after most of its members and senior officials were absent at its last meeting. Their absence from the meeting had triggered outrage and raised questions about their seriousness in fighting the menace.

Panel’s head and BJP MP Jagdambika Pal had written to the Speaker over the matter, expressing his “displeasure” at the absence of Government officials who were scheduled to brief MPs on the pollution crisis, especially in Delhi.

It is understood that Speaker Om Birla had asked MPs to attend the meeting promptly. Earlier Rajya Sabha chairperson Venkaiah Naidu also expressed displeasure on the absence of MPs from Committee meetings.

An official message communicated to panel members stated that representatives of the Ministry of Housing and Urban Affairs, Ministry of Environment, Forests and Climate Change, Central Pollution Control Board will brief them on the role of MCD, DDA, NDMC, CPWD and NBCC -- all Central agencies -- in “reducing air pollution in Delhi”.

The strong reactions invited by their absence, including the lone BJP MP from the national Capital in the panel -- Gautam Gambhir -- is likely to result in the presence of most parliamentarians and officials in the meeting on Wednesday. Only four MPs of a 28-member parliamentary panel attended a key meeting to discuss the air pollution crisis in Delhi-NCR on November 15. Besides Pal, the three other MPs who attended the meeting were BJP’s CR Patil, AAP’s Sanjay Singh and Hasnain Masoodi of the National Conference