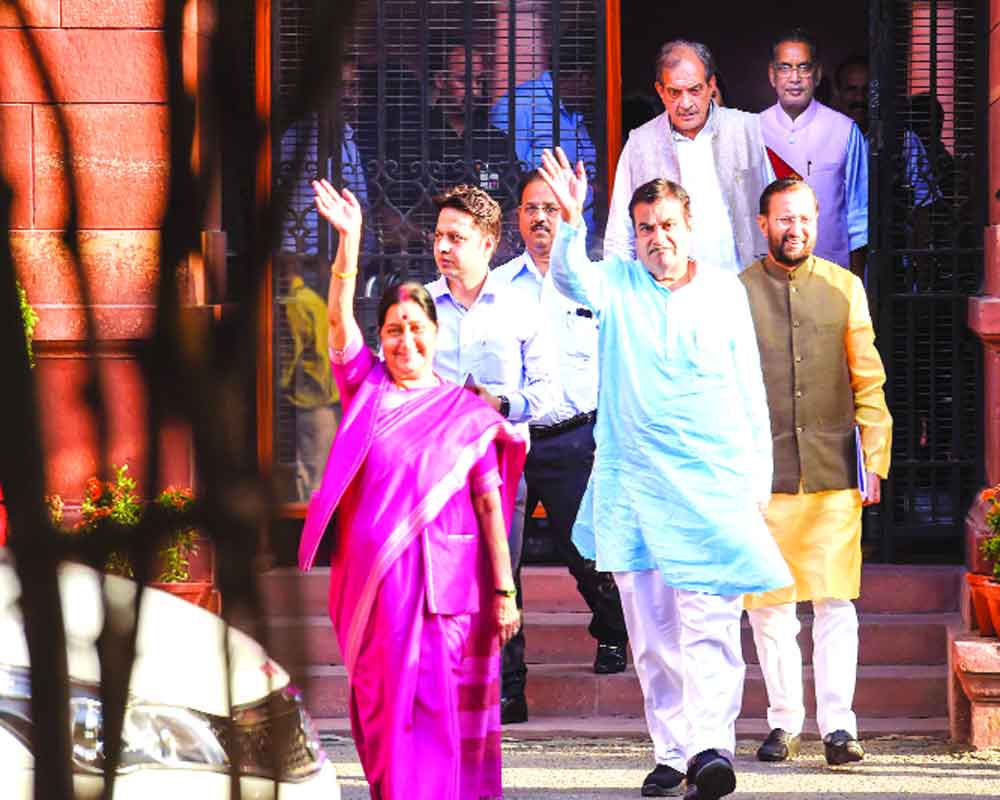 NDA-II Govt formation to be set in motion today

The Government formation for the BJP-led NDA (II) will be set in motion on Saturday with the newly-elected MPs formally electing Narendra Modi as their leader in Parliament’s central hall.

While the BJP has won 303 seats, the NDA has 352 members in the Lok Sabha. Modi is also expected to address the MPs following his election as their leader. BJP Parliamentary Party meeting will precede the NDA meeting.

The Union Cabinet on Friday adopted a resolution recommending the dissolution of the 16th Lok Sabha, making way for formal launch of the process to form a new Government. President Ram Nath Kovind accepted the resignation of the Council of Ministers and asked Modi to continue in office till the new Government assumes office.

Modi’s swearing-in is expected to take place before the end of this month and consultations are on with NDA leaders for the Cabinet formation. BJP president Amit Shah, who came in for high praise from Modi for the party’s spectacular show in the LS polls, is likely to be inducted in the Government, leaving the top party post for someone else. A heavyweight portfolio may be awaiting Shah, sources said though the BJP president has sidestepped queries on this saying it was the prerogative of the Prime Minister.

Many newcomers and young faces could be part of the second innings of the Modi Government. There is possibility that big winners like BJP’s Aravind Dharmapuri from Telangana, who inflicted a drubbing on sitting MP from Nizambabad K Kavitha, the daughter of TRS chief K Chandrasekar Rao, may be part of the new Government. Another fresh face is Tejasvi Surya, 28, who won from Bangalore South, a seat in the past held by late Ananth Kumar.

Rewards may also be coming in way of winners from difficult States like West Bengal and Odisha, where party has done exceedingly well to help it go past 300 tally on its own.

With Finance Minister Arun Jaitley having health issues, there have been talks whether he will be part of the new dispensation or not.

Sushma Swaraj, who had won from Vidisha in Madhya Pradesh, had opted out from the electoral battle this time on health ground. Her Cabinet colleague Uma Bharti too did not contest polls. Defence Minister Nirmala Sitharaman is expected to continue with a key role in the new Government.

With Smriti Irani upsetting Congress president Rahul Gandhi in his home constituency of Amethi, it is expected that her victory may be recognised with an important portfolio in the Cabinet.

A number of senior faces from the outgoing Cabinet, including Rajnath Singh, Nitin Gadkari, Ravi Shankar Prasad, Piyush Goyal, Narendra Singh Tomar and Prakash Javadekar are set to figure in the new Cabinet.

Senior Minister Manoj Sinha, who lost his Ghazipur seat to BSP’s Afzal Ansari, could be brought in the Cabinet via Rajya Sabha route.

Among allies, the Shiv Sena and the JD(U) are likely to be given Cabinet berths as both the parties have done exceedingly well, winning 18 and 16 seats respectively.

Shah is expected to interact with NDA leaders and share their views on the induction of their nominees in the Cabinet.

Modi is likely to visit Varanasi, his home constituency on May 28, to thank the voters there. There after, he will set out for Gujarat on May 29 to meet his 95-year-old mother Heeraben Modi. The swearing-in may take place after these visits.