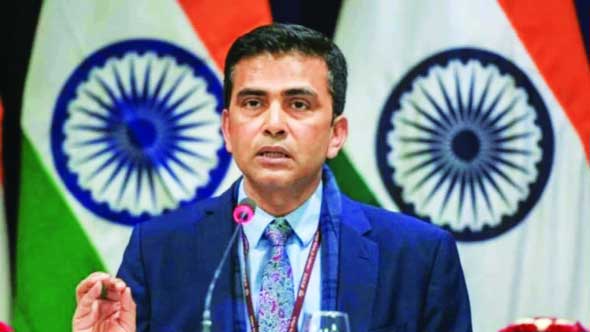 Taking exception to the reference made to Jammu & Kashmir in a joint Pakistan-China statement during Chinese foreign minister Wang Yi’s visit to Islamabad, India on Tuesday asserted that Jammu & Kashmir is an ‘integral part” of the country.  New Delhi also expressed concern over the China-Pakistan economic corridor and said it is in Indian territory.

“We reject the reference to Jammu & Kashmir in the joint statement issued by China and Pakistan after the recent visit of the Chinese foreign minister. Jammu & Kashmir is an integral part of India,” External Affairs Ministry spokesperson Raveesh Kumar said here while responding to a question on the issue.

The joint Pakistan-China statement contended that Kashmir is a “dispute left from history” and the issue should be “peacefully resolved based on the UN Charter, relevant UN Security Council resolutions and bilateral agreements.”

Chinese Foreign Minister Wang Yi visited  Pakistan over the weekend and during his talks with Pakistan leadership reiterated that Beijing’s  was committed to protect Pakistan’s its territorial integrity and sovereignty.

The visit was part of the ongoing talks  between China and Pakistan after India’s August 5 decision to abrogate Article 370 of the Constitution and with it special status to Jammu & Kashmir.

Moreover, China expressed concern after the Indian Government’s decision to abrogate special status to Jammu & Kashmir under Article 370 and bifurcate the state into union territories of Jammu and Kashmir and Ladakh.

On the  economic corridor issue, Kumar said ‘India has consistently expressed concerns to both China and Pakistan on the projects in so-called ‘China-Pakistan Economic Corridor’, which is in the territory of India that has been illegally occupied by Pakistan since 1947.”  He also said the parties concerned should cease such actions adding India is “resolutely opposed” to any actions by other countries to change the status quo in the region.