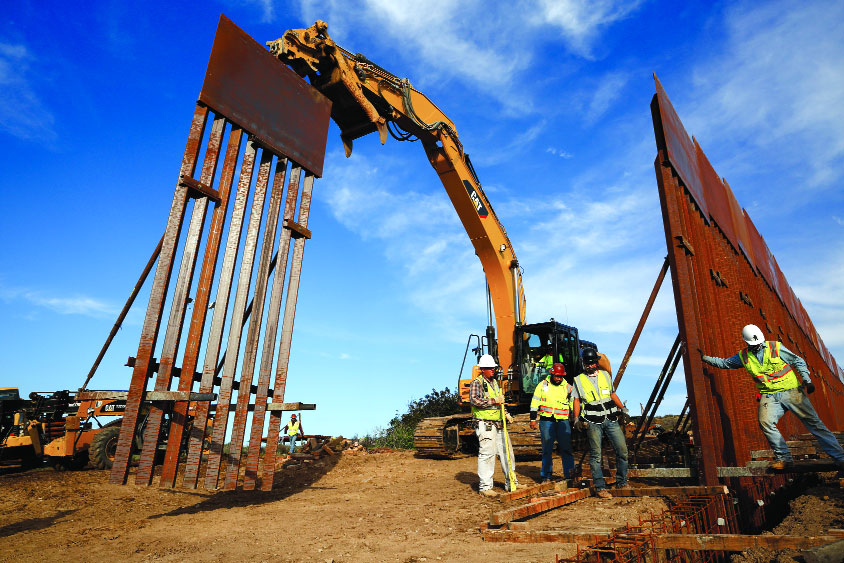 US President Donald Trump has threatened to impose a national emergency which will empower him to go ahead with his plan to construct a barrier, concrete or steel, along the southern border with Mexico to prevent flow of illegal immigrants into the country.

Trump on Wednesday said imposing a national emergency is the last option and threatened to use it if the Democrats do not allocate USD 5.7 billion funding for his controversial US-Mexico border wall plan.

Also, Trump walked out of a meeting with top Democratic leaders, House Speaker Nancy Pelosi and Senate Minority Leader Senator Chuck Schumer over the border wall plan. He argued that the current situation, wherein people are entering the country illegally and there is a massive smuggling of drugs, poses a national security threat.

“I have the absolute right to impose national emergency if I want,” Trump said.

To a question why he did not declare this option during his prime-time address to the nation on Tuesday night from the Oval Office, the President said, “Because I think we might work a deal and, if we don’t, I may go that (national emergency) route.”

A wall along the US-Mexico border was one of Trump’s signature campaign promises. Trump wants USD 5.7 billion to build the wall, even though he said repeatedly during his campaign that he would make Mexico pay for the structure. The Democrats are refusing to allocate the money, arguing that a wall would be costly and ineffective. Mexico has rejected Trump’s demand to pay for the border wall. The sharp differences between the Trump administration and the Opposition Democrats over border security has resulted in a partial Government shutdown, which entered its

19th day on Wednesday, making it the second-longest in history after the 21-day shutdown in 1995-96.

“My threshold (for declaring a national emergency) will be if I can’t make a deal with people that are unreasonable,” Trump said. Reiterating his stand after a luncheon meeting with Republican Congressional leaders at the Capitol Hill, the President said, “I may do that (declare a national emergency).”

Trump is expected to meet Democratic Congressional leaders, House Speaker Nancy Pelosi and Senate Minority Leader Senator Chuck Schumer soon. “If they don’t agree that crime and drugs come through southern border... If they can’t get that through and they don’t agree politically… It is a very bad issue for the Democrats,” he told reporters.

Trump alleged that the Democrats are opposing his proposal of a border wall because of political reasons and with an eye on the 2020 presidential elections.

“I can give you 15 speeches he (Schumer) gave, in which he talked about border security. The only reason they are against it is because I won the presidency,” he said.

Trump was furious that Pelosi said no when he asked the Democratic leaders would they support the move to fund the border wall within the next 30 days if he ends the partial Government shutdown that has crippled many offices.

“Just left a meeting with Chuck and Nancy, a total waste of time. I asked what is going to happen in 30 days if I quickly open things up, are you going to approve Border Security which includes a Wall or Steel Barrier? Nancy said, NO. I said bye-bye, nothing else works (sic)!” a furious Trump tweeted.